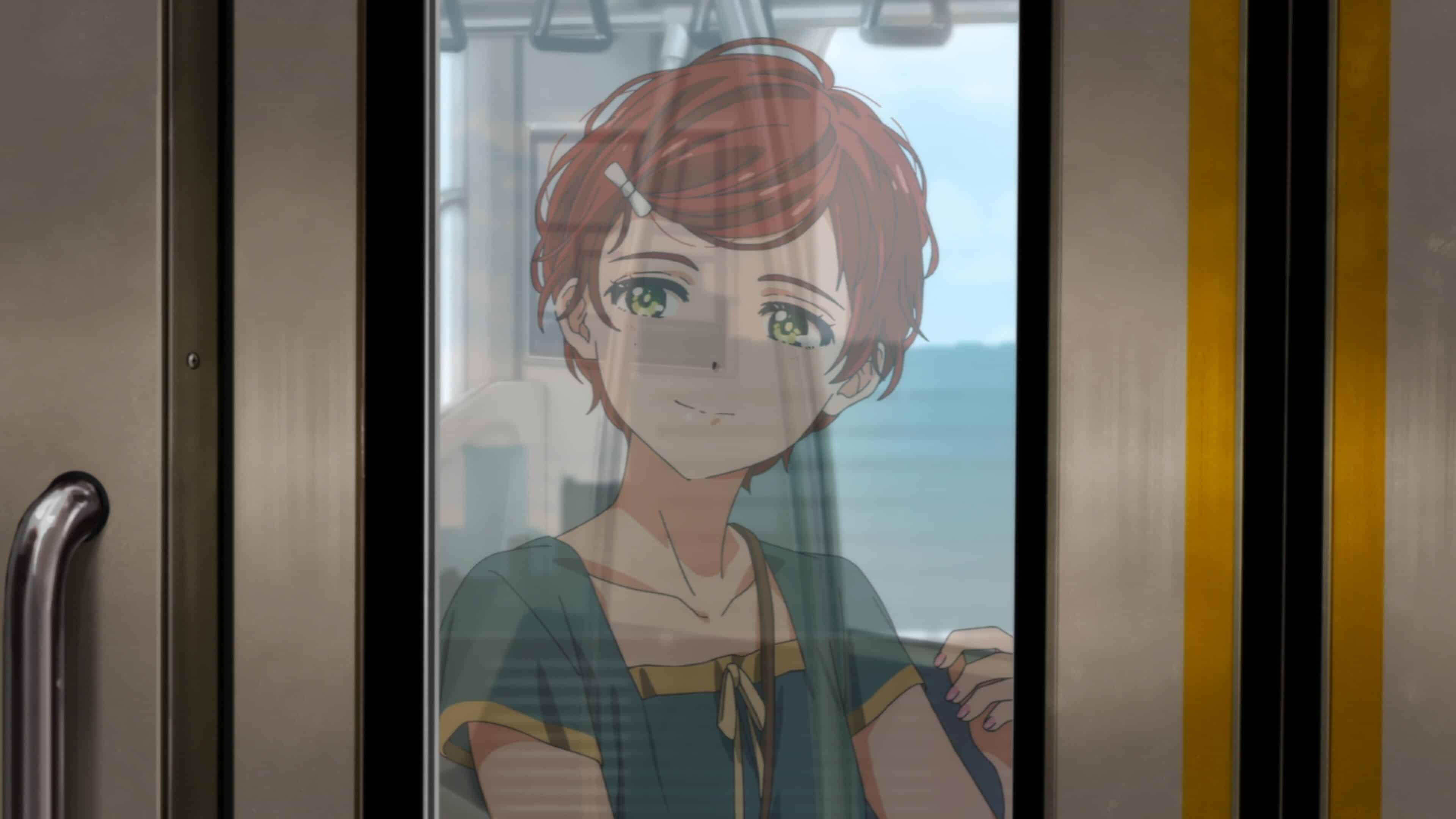 Momoe on her way to a date

In a Momoe-focused episode, she meets a trans man and might be the first to reunite with who they’re trying to save.

With Ai and Rika catching the Accas talking to Misaki, they are both ready to confess and spill their secrets. However, then Neiru shows up with a new hairdo, and Momoe reveals she went on a date so, never mind getting answers to their questions!

Now, as for how Momoe’s date went? Well, not as she dreamed. Why? Well, because she was finally asked out by a guy, but that guy turned out to be gay. So the date didn’t happen, and Momoe ended up embarrassed.

After being called out by one of the Accas for always worrying about others, this seems to make things click in place for Ai. Hence her going to Mr. Sawaki, who we learn is quitting since his portrait of Koito has opened the doors for a career as an artist.

This leads to, strangely without her mom, Ai going to the gallery opening for Mr. Sawaki’s showcase, and after a few kind words, Ai asking why Koito died?

Is This The Price You Ultimately Pay? – Momoe, Kaoru, Haruka

Since meeting Momoe, there have been two consistent themes – the first being that her notable Wonder Egg assignments have dealt with kids who were inappropriately touched. The second is that her androgyny has led to LGBT storylines and characters being introduced. “Confession” is no different for on top of the gay guy who asked her out, we meet a trans man who she is posed to save named Kaoru.

As for why they died and who is their wonder killer? Well, the Wonder Killer is their kendo club advisor, and why they killed themselves? From what it appears, it is due to being raped and getting pregnant. Hearing that, alongside just the general anger of a grown man taking advantage of someone at their most vulnerable, that makes Momoe fight extra hard, and upon defeating Kaoru’s wonder killer, they are given a gift – Haruka.

Well, at least momentarily they see Haruka until she disappears, like so many others. But what follows is this weird Wonder Killer looking thing that kills Momoe’s crocodile Panic, and forces her to eat their remains. Thus leaving her scarred.

But focusing on Momoe’s journey in particular, you do have to be sad yet happy about what we’ve seen thus far. Sadden by Momoe’s struggles to be seen as a girl, and find a guy who likes her, be it in her masculine or feminine attire. Yet, happy that she found a friend group that reaffirms her beauty no matter how she dresses, and even when they pick with her, they don’t go for low blows.

Well, outside of Rika teasing Momoe about always being asked out by girls.

That aside, having Momoe speak with someone who is trans, and the way they spoke back and forth and affirmed each other’s gender, it was a sweet and beautiful thing. It almost makes me wish Kaoru would show up for another episode, but we’re on a bit of a time crunch before the finale.

Finally Learning What Happened To Koito

Ai has spent nearly the entire season dodging the one living person who could answer the question she has had on her mind. So with her finally pushed to ask him why Koito died, maybe we may get the answer! Also, we may find out whether Mr. Sawaki is a Wonder Killer in the flesh or not.

Most of the Wonder Killers are messed up. We’ve seen Momoe fight nothing but child predators, Rika fought someone who ran a cult, and generally speaking, everyone was dealing with adults, men, and women, taking advantage of their vulnerability. This Butterfly Wonder killer though? Yeah, they are next level and don’t seem easy to defeat. It’s like, after the girls fighting everyone else’s demon, the Butterfly Wonder killer is the final boss, and as shown by Momoe, they may not be ready yet.

You ever wonder if something could be so focused on young women being seen as strong and fighting off their and other people’s demons yet still be lowkey misogynistic? Granted, the Accas are but two characters amongst so many female characters, but still. ARE YOU TELLING ME THESE TWO MYSTERIOUS FIGURES FINALLY OPEN UP, AND YOU LEAVE THE OPPORTUNITY TO HEAR ABOUT SOMEONE’S DATE?

I mean, between them revealing they are still human, meaning they are alive but just abandoned their bodies, that is one thing that raises an eyebrow. Follow that up with it being noted they made or founded the Japanese Plati, so comes the question if maybe one of them could be Neiru’s father? At least biologically. Add in Misaki being involved, and the money that company has, there are a waterfall of questions that could have been asked, yet Momoe’s date was more interesting to all of them?

Finally Learning What Happened To Koito - 82%

With a strong LGBT+ storyline and being clued to what happens when someone is saved, the final episodes of Wonder Egg Priority may push this into being one of the season's best shows.