Wherever I Look
Recaps, Reviews, and So Much More
Home TV SeriesAnime To Your Eternity: Season 1/ Episode 4 – Recap/ Review (with Spoilers)
Anime

To Your Eternity: Season 1/ Episode 4 – Recap/ Review (with Spoilers)

With Hayase intrigues by Fushi’s abilities, she takes him, Oniguma, Parona, and March to Yanome – but with nefarious desires.

While taken as captives, at first, it seemed Hayase was going to be nice. After all, she let March and Fushi eat whatever they wanted, Parona too, and though they were a bit uncouth at times, she didn’t get angry. However, in time it is revealed the reason she didn’t get angry was that she planned to drug them and take them to their cells, with the possibility that they would never be seen by the public ever again.

When Parona was a child, we learn she was chosen to be sacrificed to Oniguma, but her older sister took her place and died because of it. This knowledge is why Parona not only saved March but is hell-bent on ending the custom amongst the Ninannah people, of which there are at least 40 settlements. However, this is going to be an uphill battle as the Ninannah are far more traditional than the Yanome people, of which Hayase is.

In fact, the Yanome are far more advanced and have long moved beyond having a major focus on agriculture. They have money, written language, and seem to be an age beyond what the Ninannah have. Yet, despite the advancements they have, they remain cruel and inhumane in their own way. 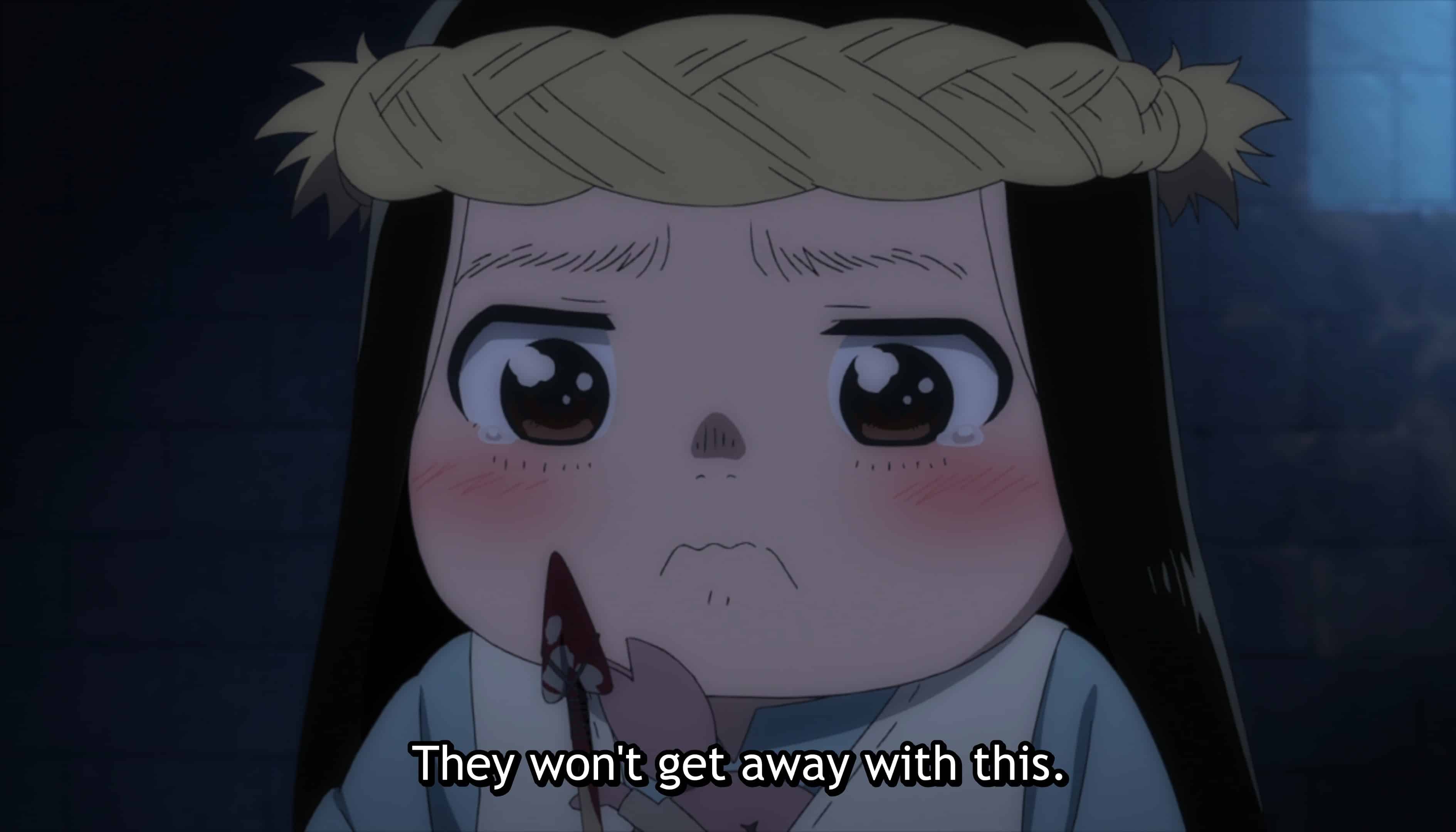 March mad as she discovers what is happening to Fushi

Case in point, they have Fushi mutilated day in and day out to test his immortality and task March with not just helping him with his wounds but possibly help Oniguma back to life. But with Oniguma done for, so comes the realization that, in time, Fushi might be the only one needed with March, and especially Parona, being optional.

With knowing their fates would be sealed if they stuck around, Parona has led the effort to get things ready for an escape, which includes March getting some of Fushi’s fur and maybe even the arrows in Oniguma. Her work, combined with Parona on cleaning duty, leads to Parona attempting to escape and nearly dying in the process.

Luckily, while she falls a few stories, enough things break her fall to leave her winded, but thankfully not vulnerable enough to be r**ed by one of Hayase’s soldiers, and instead taking them out and stealing their uniform. Thus giving her, March, and Fushi hope.

Being Ready To Cry When It Seemed Parona Died

To Your Eternity has an intro that pushes the idea that, like with the original Fushi, we may see the Orb possibly become Parona, amongst other humans on March’s journey. So when she fell and was laying there, seemingly barely able to move, I expected the worst. Add in a pervert who seemed ready to take advantage of her, and Hayase likely not giving a damn if Parona died, it made me wonder if the physical violence we’ve seen would now become sexual.

Thankfully though, To Your Eternity remains a show which may get graphic when it comes to what they put Fushi through but doesn’t wish to venture towards a more graphic form of violence.

March Being So Sweet

What To Your Eternity is crafting here is a delicate balance that reminds me of Jobless Reincarnation, but without the same level of ecchi to bring it down. For with March, her sweet, almost naïve nature, it balances out watching Fushi be mutilated or see Oniguma with its eyes ripped out. Add in learning about Yanome through her eyes, and March being our medium to understand how different her village is from the rest of the world, and it almost makes Fushi seem like a Trojan Horse. One that allows us this sweet coming of age tale, with sprinkles of trauma. 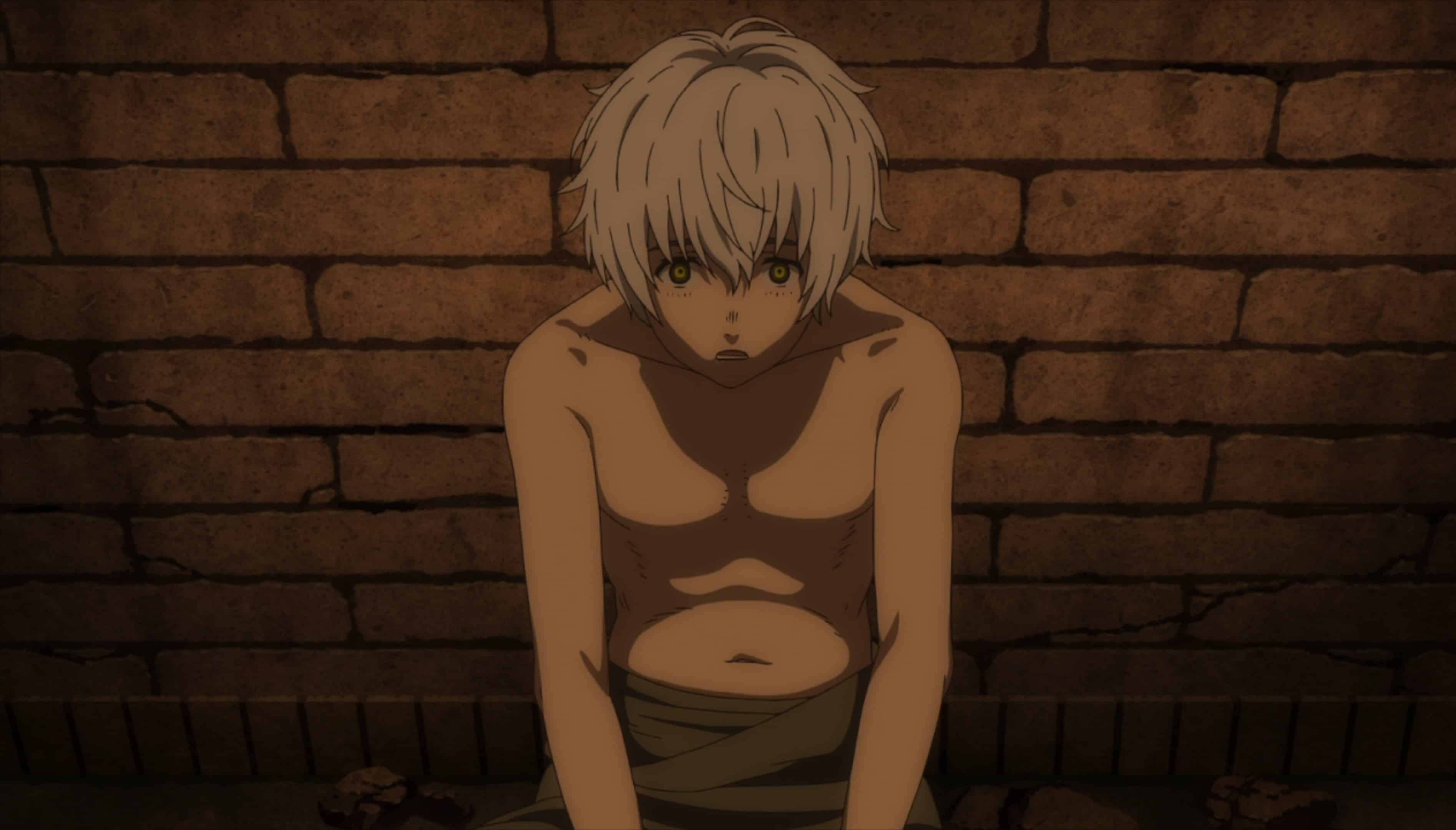 Fushi before he is tortured and experimented on

So on top of being able to transform between a dog and something resembling a human and being able to talk, Fushi can produce weapons? I’m interested in learning what is the full extent of Fushi’s abilities and, once it gains a form of self-autonomy and is worried about more than its next meal, how will it conduct itself?

As a mother to it, March will have some influence, but we can’t discount how much violence the Orb has experienced and pain as well. Leading to the need to question, when it evolves to the point of grasping language and good and evil, what kind of decisions will it make? Will it always be by March’s side and when March is old and dies, what will it do next? With this being one of the few anime we’re watching which will go past 12 episodes, it’s fun to get excited about the show’s potential rather than dread what it’ll likely cut for time.

Being Ready To Cry When It Seemed Parona Died - 88%

With the introduction to Yanome, and presenting the naivete of youth with the coldness of adulthood, To Your Eternity stands out and presents itself as possibly one of the best shows of the season.