As we’re given a clue as to what happened in Lambda, Emma and Ray desperately search for Sonju and Mujika, with time running out.

So what did happen to Norman in Lambda? Well, after Isabella handed him off, making things seem very different from what was seen and reported, he went with a man named Peter Ratri to Lambda and was tested on. Mind you, not like Vincent and the rest, who we see, but just his intelligence. However, in time, be it the food, the air, something, it seems Norman started to get sick and not just of seeing people openly tortured. Thus, he figured out a way for everyone to escape, steal information, and blow up Lambda.

The Search For Mujika and Sonju – Mujika, Sonju, Ray, Emma

Less than a week to find two demons who have made it their top priority to not be found is a difficult task. One that almost gets Emma and Ray killed but, luckily, before Emma gets eaten by a giant demon, she is saved!

However, Emma and her crew are too late, and Norman has already unleashed hell. But, with him having second thoughts after seeing children and more get eaten and ripped apart, maybe he might allow Mujika to stop this? That is, alongside the old man we saw before, who too has healing blood. 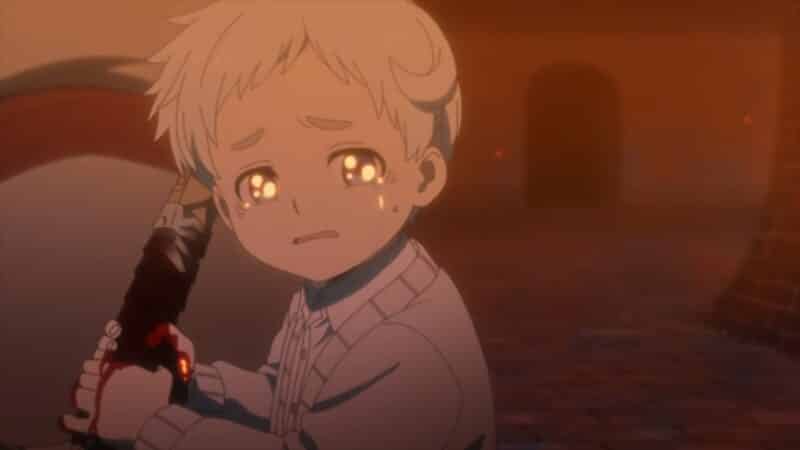 And So It Has Begun

With Norman beginning the genocide of demons, we finally have conflict. For surely, Mujika and Sonju, especially, aren’t going to just stand by and watch their kind be obliterated. Nevermind, even if Norman decides to repent and try to stop the rollout, look at his opposition. In the episode, we may not be shown what made Norman cough blood, but we saw the horrors everyone else went through. So to believe or expect Vincent, Barbara, or any of the others to stop? Oh, that is just foolish.

Thus, despite demons being the bad entities, often unnamed but looming in the distance, it seems humans will ultimately be the bad guys. A minor twist which is quite interesting. Particularly if it leads the upper echelon of demons, and humanity, to be more than entities we see in the opening titles, but rather people named and seen in the flesh.

As Norman does what he thinks is necessary, he opens The Promised Neverland up to have some sort of villain in its second season.