Nearly a year has passed since Emma and Ray escaped the farm and almost 6 months since the bunker – let’s see how they are surviving despite all they’ve been through.

Thus far, Emma and Ray have kept everyone alive. There were a few moments they were nearly captured and killed, but kids are smiling, and if they have any trauma, it isn’t enough to affect their day to day. However, being that Emma has taken on that maternal role, naturally, she feels guilty about not having provided more for the kids and even rescuing the ones still back at the farm. Leading to Ray having to remind her of all she did to help her distance herself from all she didn’t do.

Demons Are Suffering Too – Emma

Up until now, the focus has been on the elite demons who can afford the most high-quality human children, the mothers, the kids, and then a few outliers. But in episode 5, we are introduced to what common demons look like and do within a market, as well as how some are suffering due to an apparent human shortage or just the cost of human meat.

So, how do they suffer? Well, it seems they become “wild” or disfigured when they eat low quality or lack human meat. Now, we know this isn’t fully true, due to Sonju and Mujika looking just fine. However, it does seem something might be wrong with the scraps your everyday demon is getting based on how sickly some of them are looking.

This is why when Emma and Ray allow two of the younger ones to join them in the market, the smell of humans sets two demons off and leads to a massive chase throughout the demon town. One that allows the kids to get away but Emma and Ray end up cornered. 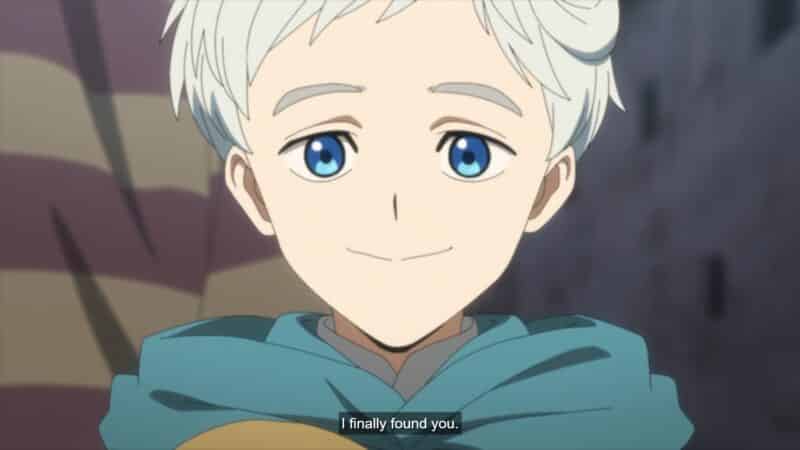 Norman: I finally found you.

Luckily, when that does happen, they find themselves momentarily rescued, but it appears to be by other demons who, from what we know, could have smelled the kids too. However, then it is revealed it is Norman who rescued them! With who by his side is also a good question, but right now, all that matters is Norman is alive and away from the farm!

We’ve always lived in this mindset that demons were these high class, strange beings, thus why Sonju and Mujika were exiled. Rather than live high on the horse, lavishly, they roughed it out in the woods and ate anything but the most delicious thing you could. Yet, in learning that there are poor and potentially middle-class demons, our perspective shifts.

Also, it pushed you to wonder, as you saw some demons becoming sickly, when it came to Sonju and Mujika, how did they pull themselves away from what is a demon’s natural diet? Were there side effects, as we see, or are demons just programmed to believe you will become monstrous without eating enough human meat?

With just a taste of their culture, we’re left wanting more, and hopefully, we’ll get it soon.

Not Only Norman’s Return But How He Returned

Norman returned with slaying two demons in an alleyway, and he, alongside Ray and Emma, had the audacity to take off their masks. I don’t know what’s next, but I’m sure two demons chasing people, and then others jumping off a roof, that attracted attention. The kind which really makes you wonder, who else saw what happened? Surely someone did, right?

That aside, Norman’s return is shocking, and just as much as seeing how your average demon lives, him showing up leads to so many questions. Specifically in regards to where they are living and how are they surviving since Emma and Ray? They are just making it.