Things have been going rather well for Emma and everyone else. However, it seems the good times might be coming to an end.

Pictures of Family and Thanks To New Friends – Emma, Ray, Mujika, Sonju

After 6 days of training and bonding, Emma, Ray, and the rest of the kids have grown quite fond of Sonju and Mujika, and the feeling is mutual. This makes parting hard yet necessary as Sujika and Mujika can’t be with them forever.

Things Were Seeming A Little Too Good To Be True – Emma, Ray, Mujika, Sonju, Yvette

So, not too long after Mujika and Sonju part from the kids, Mujika questions why Sonju helped them, and his answer is quite frightening. You see, while Mujika is against eating kids from the farm, he isn’t against the descendants of Emma and Ray, who are wild like the animals of the forest. Sonju sees them as two separate beings, and with that in mind, he is salivating for the day he can have a human without guilt again. As for Mujika? She doesn’t verbalize the same feeling. But, Sonju plotting on Emma and Ray’s grandchildren isn’t an immediate issue. It might actually be William Minerva. Why? Well, when they discover his bunker, he isn’t there, but everything they would need to survive is. There is electricity, a water source, an area to cook, communal eating, beds, just about everything – even books!

However, while exploring two things are found: The first is a room with a phone, which is rather strange. But, the real red flag is the “HELP” writing in a secret room. Which Emma and Ray don’t discover but rather Yvette, for with the phone ringing and Mr. Minerva answering, that is what gets everyone else’s focus.

Things Not At All Being As They appeared

Between Sonju talking about biding his time for Emma and Ray to have kids, their kids have kids, and so on, so he can get back to eating humans to the idea that Mr. Minerva may not be an ally, the intrigue has arisen. For, think of this, what if Mr. Minerva is a demon who may not be wealthy enough to buy kids outright but was clever enough to create his own farm?

Because isn’t that what was made underground? A farm just with the guise the kids have independence? And let’s take note, as Sonju said, only the smartest would make it this far, so being able to occasionally make a kid disappear in the dead of night, put them into a holding area, and ship them off on the black market, that was probably lucrative. Plus, who else but a demon would be able to hide all the information we see at the farms? 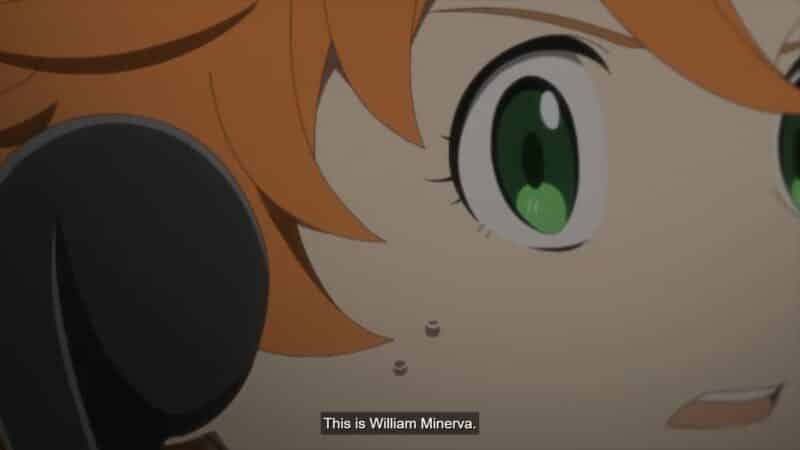 You know who, right? A MOM! So maybe Mr. Minerva partnered with a mother, to place the books and clues? Though I could also be completely wrong, and Mr. Minerva could be a good person, it’s just the children who were there before decided to make the same deal humanity made 1000+ years ago for peace. It’s just when they couldn’t produce quickly enough, they were killed since they lacked the threat in numbers their ancestors did.

Things Not At All Being As They appeared - 86%

Things have been so good you can see a certain level of complacency coming about. However, between what only viewers become privy to and what some of the kids discover, it might be time to remind everyone this is essentially a horror anime.