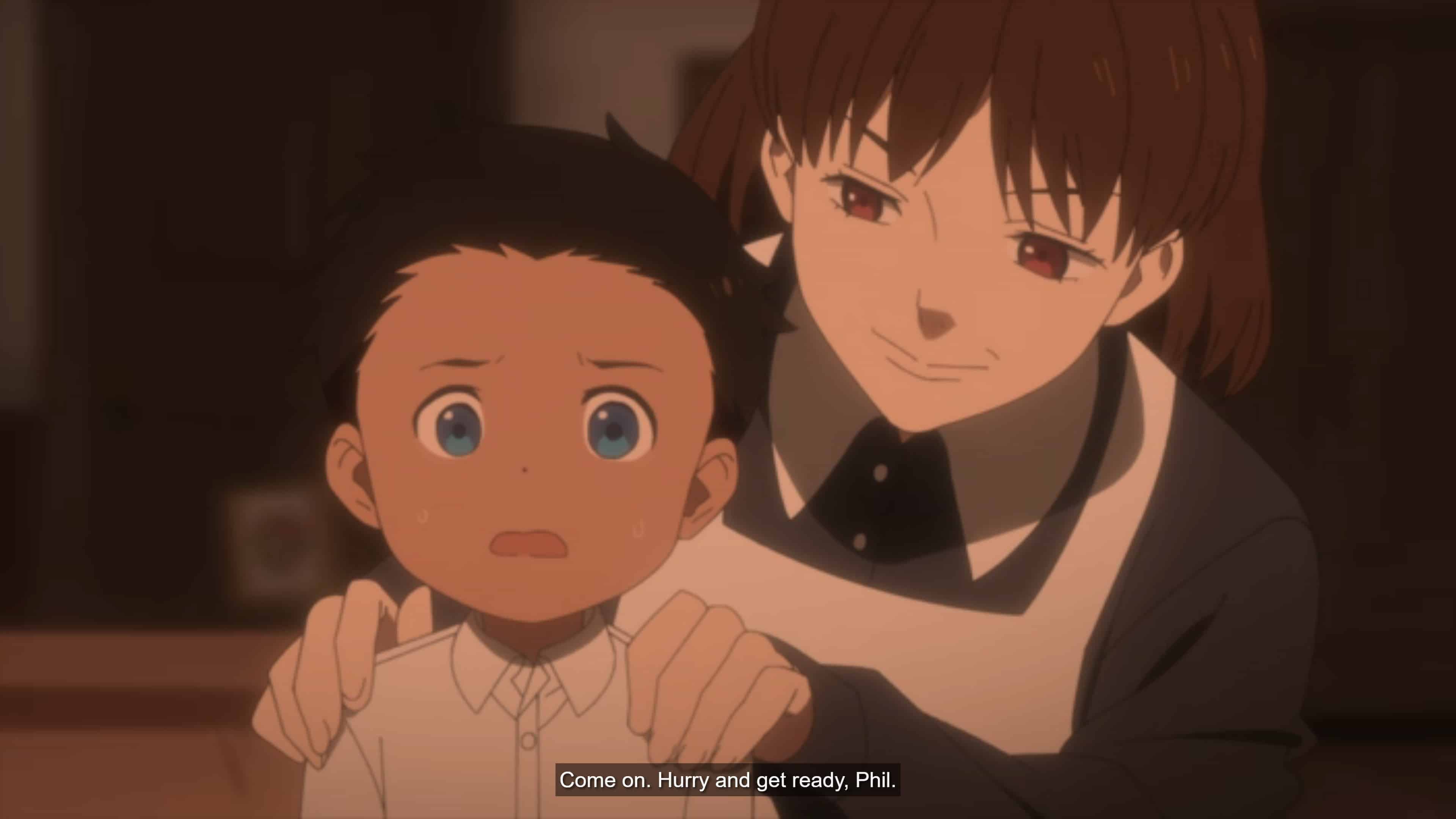 One of the mothers telling Phil to get ready

The time has come! Members of Grace Field, and the other plants, will either escape the demon world or potentially die trying.

Despite how things seemed in the last episode, Vincent did not betray Norman. Rather, he only pretended to in order to manipulate Peter so that when Norman’s plan was executed, Peter would think he had an advantage.

It All Coming Together – Norman, Emma, Phil, Peter, Vincent

However, the truth is, Norman’s associates pretty much destroy all the demons placed amongst the walls of the farms, as Peter preps the kids to be shipped out. This only makes things easier for Emma, who, using wells and the blueprints given, is able to get a message to Phil, among others, so that the mothers can be trapped once Vincent gets access to the terminal and the kids can join Emma at the gate.

A plan that works rather marvelously until it is time to flip the switch and head to the human world.

Now, when it comes to escaping, there are multiple scenarios, one after another, which makes it seem freedom isn’t happening. The first is Peter, the Gatekeeper, showing up, with all the mothers, and it appearing the fight is over. But then, with Isabella betraying Peter, so comes hope. Especially after the bombs implanted in the mothers being made useless by Vincent, though not on purpose.

But then comes the issue of demon reinforcements on their way, but then we learn Vylk is damn near leading an army of demons, with Mujika’s blood, to overthrow the demon lords and the system. Leaving Emma, always wanting everyone to live and be happy, offering Peter the chance to live in this new world than die in the old one. Which Isabella isn’t necessarily for, as Peter has shown himself as incorrigible, but you know Emma has to at least try.

All The Twists & Turns

This season has shown, just as things seem at their worst, or deadly, for the Grace Field escapees, something or someone saves them. Yet, with one twist after another, there was this thought that maybe Emma and company, their luck ran out. Which was quite exciting and made you wonder, as Peter kept seeming to have the upper hand and the demons he works with, would this mean prolonging an escape and us really getting to know how things work with the gatekeepers?

Feeling The Buildup To This Was Rather Weak

But, alas, that isn’t the case. Instead, what we get to see is the demons and Peter made fools of and defeated. Which, with not much in the way of a build-up when it comes to Peter or the no-name demons he has been working with, as much as we loved the twists and turns, this didn’t feel like that much of a victory.

Take note, we get the ability to escape has been a long time coming, but, unlike season 1, it rarely, if ever, felt like Emma, Ray, Norman, or anyone else’s life was in danger. They might end up in uncomfortable situations, but, more often than not, despite their age, and lack of advanced defenses or weaponry, they overcame the situation.

Case in point, with just blueprints and a hackable system, they took down demons three times their size, somehow had the strength to tie them up and overran a system that has been in place for 1000 years. Which, for us, made it seem less that Emma and company were capable and more that the bar was lowered so much to make this possible.

Feeling The Buildup To This Was Rather Weak - 70%

While the lack of build does take away from Emma and company's triumph, nonetheless, they might be on the brink of freedom!