More and more there is a need to question what the kids of the farm can do, and Norman discovers yet another obstacle.

With Isabella announcing Norman is on his way out, so comes the question of what can be done? Ideas range from him hiding, escaping on his own, to Ray breaking his arm, or getting a cold, so he isn’t put in Norman’s place. All of these ideas, despite how luck is clearly not on these kids side, slowly but surely bring them back into an optimistic mood. Though, it isn’t for long.

Despite Ray saying he has only known for 6 years what happens at the farm, he reveals that isn’t true. Allegedly, he has memories all the way back to when he was in a dark, warm liquid he says. Also, he says that, from his birthing group, they were split into five groups and separated. Leading him to believe there are 5 farms and they are all connected by HQ which lies on the other side of the gate. Thus cutting one escape route.

The End Of The Rope: Ray, Norman, Emma, Isabella 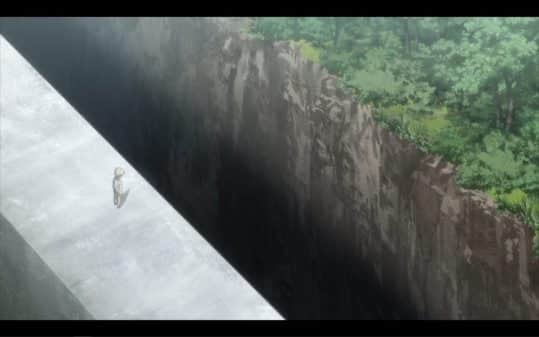 The backup plan is put into play, minus Ray hurting himself, and with a new rope and the hope only a child could have, Norman reaches the top of the wall. Oh, and also he uses Ray’s device to disable the tracker. But, no sooner than he is shown feeling the wind in his hair, we see him returning home.

Why? Well, the wall may have trees and more in the distance, but there is also a moat surrounding the farm. Meaning, there is no way to escape and thus explains why, when Isabella was a child, she gave up on escaping.

So Where To From Here?

Let’s add everything up: The outside perimeter of the farm has a gap the kids can’t jump. Beyond the gate is headquarters where demons walk around freely. To our knowledge, there isn’t some The Truman Show type of situation where the gap is fake or anything like that. Also, Isabella is onto them, HQ knows about them wanting and trying to escape, and assuming Emma’s line in the sand hasn’t changed, it’s either all or none when it comes to her leaving.

So, taking all that into account, what can happen here? While the kids are fast, the demons are strong and Isabella didn’t need much effort to break Emma’s leg. Also, it isn’t like guns or items like that are around to compensate either. It took Ray 6 years to build a minor taser. Leaving both the kids, and honestly, viewers, left wondering what can happen and what can be expected? Well, outside of the hope of a last-minute revolution of some kind happens.