The Ancient Magus’ Bride: Season 1/ Episode 20 “You Can’t Make An Omelet Without Breaking A Few Eggs” – Recap/ Review (with Spoilers)

As usual, as Chise commits an act of sacrifice to protect or help someone, she ends up making things terribly worse for herself. Something Elias is growing tired of.

Table of Contents show
1 Taking Down A Dragon: Chise
2 Alternative Medicine: Chise, Dr. Shannon, Elias, Angelica, Mariel, Lindel
3 A Friend or Spy?: Chise, Stella, Joseph, Elias
4 Highlights
4.1 We Have A End Goal Now
4.2 Understanding Elias’ Abandonment Issues
5 On The Fence
5.1 Quick Explanation of Witches
5.2 Follow Wherever I Look on Twitter or Like us on Facebook.
5.3 Previous Episode’s Recap

Taking Down A Dragon: Chise

Thanks to Joseph’s magic, through atavism we have a fire-breathing dragon gone wild. One which, strangely, doesn’t end up destroying the building and fully exposing the magic world. Well, at least that is what we are led to believe through the show just sidestepping fire bursting out of a building and presenting no follow-up. But, at least through Chise absorbing some of the dragon’s magic, it hasn’t returned to normal but is calm now.

The problem is with that, not Chise has the dragon’s curse. Some kind of hex which will attack and torment Chise and mean, on top of being a Sleigh Beggy, her life is threatened more than ever.

Which of course leads to the question of how to treat Chise’s latest symptoms? Of which there is no answer. This is beyond Angelica, and she smacks Chise for being reckless and pretty much making all the work she has done for naught. As for everyone else? Lindel finds the situation unfortunate and feels bad, but there isn’t much he can do. Elias perhaps is the maddest though since, like Angelica, he is working so hard to keep this girl alive but he keeps getting this feeling she is trying to leave.

Something which isn’t helped by her physically leaving the house, once again, without telling anyone. Which sends mixed signals for Elias. She comes back but acts like a caged animal. He leaves, and she goes after him. She is so hard to decipher for someone with limited experience dealing with humans long term. 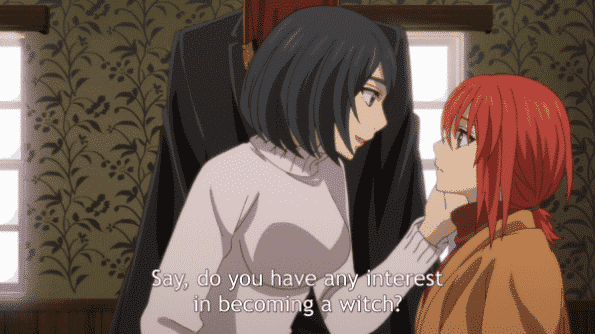 But, there might be a means of solving this issue. Thus far, Elias has relied on the knowledge of mages and sorcerers to ease Chise’s ailments. However, this woman named Mariel presents another option. She is a witch and they specialize in curses. So, joining her coven could lead to some means of handling this dragon’s curse. For otherwise, the only other options are dying by the end of the spring, more than likely, or doing as Dr. Shannon proposes and living permanently in the fairy world.

Knowing nothing about the events days before, Stella pops up to invite Chise to her birthday party and comes to learn that day, which isn’t noted specifically, that is month or day, is Chise’s actual birthday! Which of course leads to questions of what Elias and company should or will be doing, but Chise didn’t tell them *hunches*.

However, with Chise not wishing to die and disappear as before, getting to 18, her next birthday, is now a goal. One which, despite initial apprehension, Elias believes having Chise join Mariel’s coven is for the best. Which Stella listens to out the window. Pushing the idea that perhaps Stella is a spy for Joseph or maybe Joseph, knowing who Stella is, sent a doppelganger of her or possessed her, in some way. Hence explaining Mariel’s reaction to Stella as they crossed paths.

We Have A End Goal Now

Chise wants to make it to 18 and have a birthday party. We finally have a goal for the series and considering how time jumps on this show, the remaining episodes should be able to fit them taking down Joseph and having a birthday celebration. The only question is, in what condition will she turn 18? If she is even alive to attend the party.

There is something weirdly like All I See Is You about Elias and Chise’s relationship. When he bought her, she was down and out and highly reliant on him. However, as her confidence returns, with little thanks to him, she begins to want to explore. Make friends and have interactions without him, and you can see a similar childish jealousy there. One which even included him trying to choke the life out of her once.

And taking note of how he got angry when she talks nonchalant about dying and how he is willing to work with a witch to keep her alive, you can really understand Elias’ abandonment issues. Of which aren’t healthy what so ever, I’m not excusing it, but you can see similarities which help push why every single last being, human or otherwise, tries to get Chise away from Elias.

I find it funny, and kind of sad, how we have quick summaries of mages, sorcerers, and now witches. Even of the fairy world, to a certain degree. But, with this show being only a little over 20 minutes, perhaps it is unfair to wish for us to deep dive into each magical sect and to fully understand what is going on. After all, Chise is our medium and with Elias having long stopped teaching Chise magic, in a way it makes sense for us to be as ignorant as her on many things.