The Ancient Magus’ Bride: Season 1/ Episode 2 “One Today is Worth Two Tomorrows” – Recap/ Review (with Spoilers) An acquaintance of Elias meets Chise and they go onto their honeymoon – which leads to danger.

The Present Might Be Odd But It Is Better Than The Past: Chise, Elias, Silky

As probably noted in the three-part prequel to this, Chise’s mother committed suicide in front of her. This sort of haunts Chise through the episode and makes her current living situation nice but odd. For one, Silky, kind as she is, and apparently a fairy, as well as Elias’ landlord, is slightly off-putting. Then with Elias, with him bringing up a honeymoon and showing he was not joking about stuff said about two days ago, slight red flags are raised.

Yet, at the same time, considering the state Chise was just in, why pick being between a rock and hard place when there is grass? For Chise’s apprenticeship to begin, Elias needs some tools. It isn’t gone into detail what specifically, but Angelica, a Magus Craft mage [note]Mages who make things run off magic instead of electricity[/note] is Elias’ long-term go-to person. Someone who gives Chise her first taste in magic by having her work with her fairy Hugo.

This leads to Chise, slightly, exposing herself and leading Angelica to become a bit curious. To the point, she makes something special for Chise beyond a welcome gift. 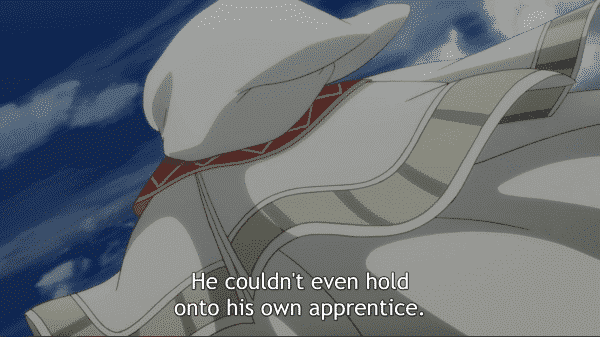 After running one errand, and dealing with the local priest Simon, Elias and Chise are off to their next errand. One which requires them going to Iceland to check out the dragon situation. During all this, Elias asks about the crystal garden Chise made while at Angelica’s and the leads her to reveal her mother dying. A sad topic which, strangely, to Chise, he knows just what to say to say.

Though what starts off as a nice honeymoon, mind you they aren’t officially married yet, becomes a bit traumatic. If only because some dragon rider kidnaps Chise. Something which may lead to us meeting a less than friendly and understanding Elias.

Getting a Further Understanding

While I fully intend to watch the OVA prequel to this, it is kind of nice that even without that background, you are given a sense of what has gone down. To the point where if you didn’t know the OVA existed, you could just pick this up and press on. But, with that said, one of the things I admire is that just because there is stability and kindness in Chise’s life, it doesn’t mean she now is pulling a 180.and life is rose gardens and butterflies. It takes the trauma she experienced seriously and shows it takes time to heal from all that. Even if in sort of ideal living conditions.

But, what I’m also happy about is we got to understand further Elias and the whole mage thing. Between Angelica clueing us in Elias isn’t a special unicorn, the difference between sorcery and magic, the different kinds of mages there are, and how magical beings play into that, we were given a good taste of how complicated magic is. All the while not being presented with anything too overwhelming.