Chise and Elias finally get to have a real conversation about their respective pasts, and of course, that moment gets ruined by the episode’s ending.

Table of Contents show
1 The Warmth Which Comes With Closeness: Chise, Elias
2 A Look Into The Past: Chise, Elias
3 A Visitor: Elias, Chise
4 Question(s) Left Unanswered
5 Collected Quote(s) & .Gifs
6 Highlights
6.1 Getting To Know You, Getting To Know All About You
7 Follow Wherever I Look on Twitter or Like us on Facebook.

The Warmth Which Comes With Closeness: Chise, Elias 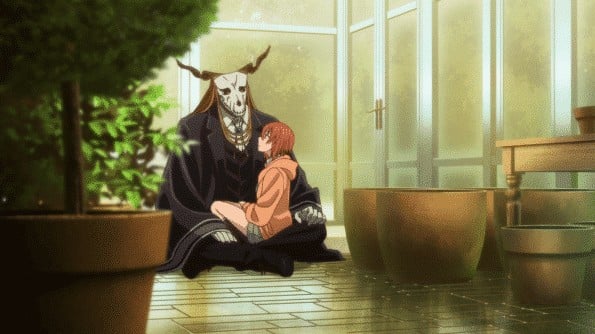 With Chise and Elias reunited, things have gone back to how they were. Elias teaches Chise’s menial tasks, like shaving Wooly Bugs, something goes awry, a Snow Bug attacking her, and he handles the situation. One which requires a whole bunch of Wooly Bugs to suck up the cold the Snow Bug caused, and Elias cradling little Chise. Which, upon her waking, it leads her to recount everything that happened while visiting Lindel.

Something of which starts off fine, very basic, but then she asks if she looks tasty to Elias and he is ready to wipe her memories without a second thought. Something she stops for, as has been showing repeatedly, she is not scared of Elias. Which, for some reason, and him being childlike isn’t a good enough excuse, he refuses to get through his head.

A Look Into The Past: Chise, Elias

But, then again, what draws these two together is their similarities. Feeling abandoned, unwanted, and fearful of people leaving their lives, is shared trauma. Chise’s father and brother just disappearing, and her mother taking her life, will always stay with her and make the idea of a family be one approached with caution. Then, for Elias, while he has Lindel now, how long was he wandering on his own? Born without a caretaker, he had to fend for himself and while a huge being, the lack of nurturing has effectively left him stunted and something like family almost as foreign to him as it is to Chise.

Yet, through Chise, he learns what it is like to tap into his human side. Such as understanding the coldness of Chise’s absence was the feeling of loneliness. And with understanding what the feeling was there is such an immense joy. For, despite what it may seem, there is an actual balance here. Chise gained a family and Elias, arguably, gained a heart.

With Elias being a local doctor of sorts, naturally, visitors come and go – of both a human and otherworldly variety. Something that Chise has grown fairly used to and, seemingly, has learned not to peer onto their true forms. However, then an Ashen Eye visits to see this new mage. From what we are told, this particular one has been alive for over a millennia and seemingly, through touch, can tell you just about anything about yourself.

Leading to a rather odd, if not alarming moment. One in which the Ashen Eye turns Chise into a fox. Something which would be alarming if it wasn’t for the fact that the episode previews give it away that she turns back to normal. So, I guess like when Lindel kidnapped Chise, there is nothing to worry about here.

Bonds of blood are insignificant in living as an individual.

Even if it is rehashing already known information, with a few little extra details, there is something about Chise and Elias’ heart to heart which made me feel warm. Especially with how it further drove home this idea that despite as big as Elias is, and seemingly powerful, he suffers from arrested development. With limited human interactions, since it seemingly isn’t sought out by both parties, a lot of what it means to be human, perhaps even alive, is foreign to him.

So even though we see similar baby steps guided by Chise repeatedly, strangely it hasn’t gotten old.