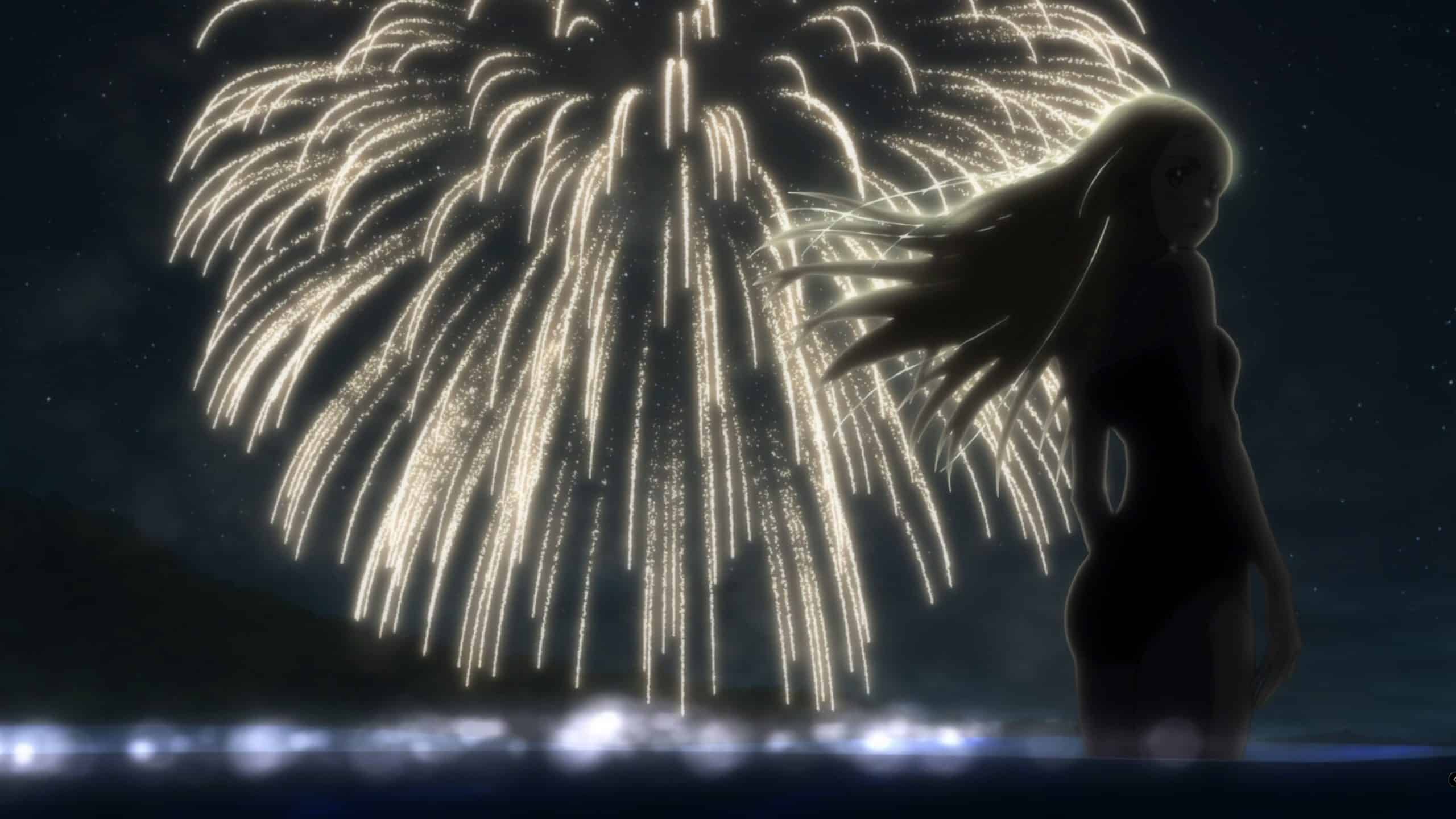 "What might be Ushio's Shadow, with fireworks in the background," Summer Time Rendering, "Drifting Ashore," directed by Nobu Ishida, 2022, (Disney+)

As Shinpei involves Sou in his investigation regarding Shadows, a crush is revealed alongside a the appearance of a potentially deadly Shadow.

Beginning where the last episode left off, Shinpei is recounting everything that he recorded on his phone the night before, to Mio’s shock. But, with him recounting everything comes the idea that Shiori could be in danger if Shadow Mia didn’t get her. So with that in mind, Mio is ready to hightail it to Shiori’s family store, her home, but with thinking it would be safer for her to stay behind, Shinpei decides to go to Shiori’s family store alone, only to find it is closed.

Now, luckily, a woman named Shiomi joins Shinpei to do a mini-investigation. It’s a lucky occurrence mainly because she intercepts Shinpei being attacked than her insight. For with scorch marks on the floor and a Shadow Shiori seemingly ready to attack Shinpei, Shiomi interrupting seems to be a blessing. Though, considering she could have been an easy kill, it isn’t clear why Shiori felt the need to run rather than take out both.

But, it’s for the best since it gives Shinpei another day, and now he can work with Sou and Mia on how to handle the Shadows going forward. However, while Shinpei is given Ushio’s cell phone by Tetsu, which could provide further details into her death, he can’t just focus on that. Why? Well, it seems a love triangle featuring Ushio, Mio, Shinpei, and Suo may complicate things. Especially since Suo’s friend, Toki, wants Mio’s feelings addressed, even if it means embarrassment for multiple parties.

Luckily for Shinpei, though, he is able to escape that madness thanks to a Ushio spotting that he doesn’t even contemplate could be her deadly shadow.

While the Groundhog Day element makes it clear that Shinpei isn’t in permanent danger, it doesn’t discount the moments when his life is threatened. This is a highlight to us since “Summer Time Rendering” hasn’t gotten to the point of you becoming numb to Shinpei’s mortality being guaranteed. When Shiori was potentially going to kill him, you still get worried, and with him wandering about to see Ushio, again, there is this vibe that the worst can, and likely will, happen.

Yet, there isn’t a level of frustration or you rolling your eyes. “Summer Time Rendering” still has enough of a hold to keep you from feeling jaded and having your fingers crossed.

The whole situation about who likes Mio, who she likes, and then throwing Shinpei in there? It’s not the best. Yes, it could be understood that feelings could have developed with Shinpei growing up with Mio and Ushio. However, because we don’t know everyone’s age, it is a bit weird and honestly, with the Shadow mystery being so cool and interesting, throwing in teen/young adult relationship drama feels unnecessary. It doesn’t add much. It just takes away.

Summer Time Rendering: Season 1/ Episode 3 “Drifting Ashore” – Recap/ Review (with Spoilers)
Overall
As new layers are added to the interpersonal relationships of our leads, in some ways, it heightens the murder mystery, as this creates potential vulnerabilities when a Shadow replaces them. But, at the same time, who really wants to watch yet another uninspiring love triangle?
Highlights
Shinpei In Constant Danger
Disputable
The Love Triangle
81
Follow Wherever I Look on Twitter and Instagram, Like us on Facebook, and Subscribe to the YouTube Channel.