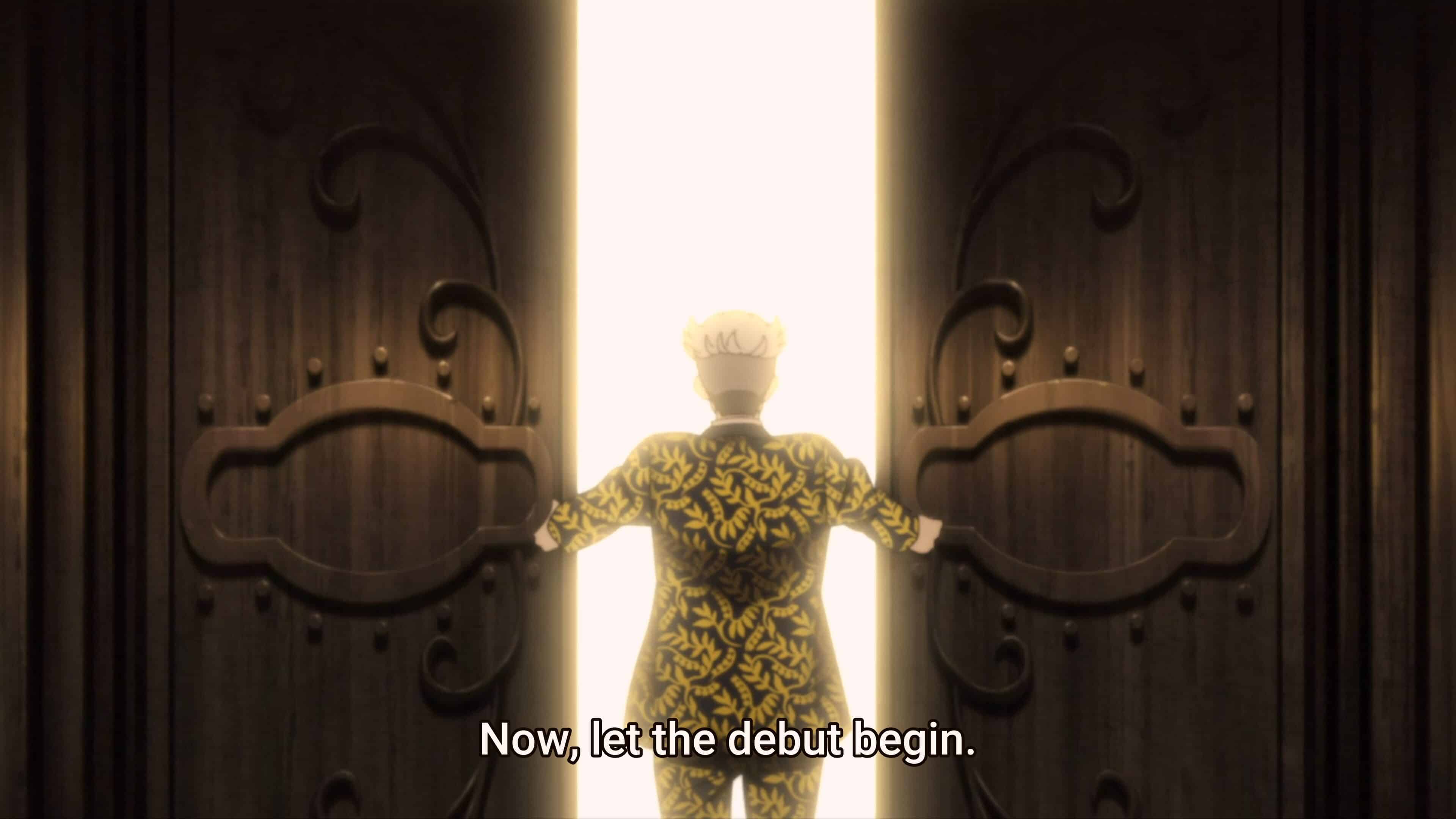 Edward opening the doors to the debut hall

It’s time for the debut! This means we get to meet the other Shadow Masters properly, and see what the test that’ll determine everyone’s fate is.

With Barbie learning it was another Star Bearer’s fault there was a mechanical issue, while she doesn’t humble herself, at the very least, she speaks the truth. Mind you, by not blaming people at her level but saying the specific issue.

However, while you’d think that would mean good times for all, sadly, for Mia, it doesn’t. Once again, she returns to a room filthy, and even with the doll Emilico gave her broken. Leading to you being pushed to believe her Mistress, Sarah, is the one doing this. Why? Well, because Sarah is a psychopath who even beats Mia, who seems to believe the beating will help her grow.

Being that preparation for the test is about learning to mirror your Master or Mistress, while they study to become prim and proper, the end results are mixed. For Rum, whose master is the ever silent Shirley, they aren’t in sync. In fact, Rum sees Emilico as a closer relationship than what she has with Master Shirley.

But, on the other end, Shaun and John, who like Patrick and Ricky, are like brothers. However, while John treats Shaun like an equal and is even willing to wear glasses for his sake, Ricky is different. His relationship with Master Patrick is what you can imagine Edward could be like with his master. Ricky knows, at the end of the day, his job is to make his master shine. However, this doesn’t mean he doesn’t have his own ambitions. It’s just, to succeed, he needs them both to, and add in Patrick doesn’t pull rank, it allows them to get along.

However, when it comes to the most in sync, that would be Lou and Louise. These two seem to be perfectly matched since Lou is as silent as Shirley and is the epitome of a living doll since Louise loves dressing her up, touching her, and feels that she has complete ownership of her. This is opposed to Kate and Emilico, who are opposites in everything but silhouette and are by no means in sync since Emilico lives her life as a young girl vs. another person’s face.

Which shows during the test, for Emilico and Kate end up in the bottom rung, nearly failing in their debut. As for everyone else? Well, Emilico’s encouragement helps Rum and Shirley, and John steps up in such a way where he and Shaun do well. Patrick and Ricky fall a tier because Ricky runs the show at times, but Lou and Louise do quite fine.

Now, what are the tests? It is a mixture of gotcha questions administered by Edward, seeing how the dolls and shadows act in social situations and whether the dolls know their place. Hence the final ranking is Louise at the top, no one second tier, John and Patrick at third, Shirley on the fourth level, and Kate on the 5th, with the 6th level meaning failure.

Meeting The Masters & Seeing The Dynamics

Perhaps the best part of the debut is seeing how these various living dolls interact with their masters. Be it Shaun and Ricky with theirs, in which you can see a friendship is in place, or what Louise has with Lou, which pushes the idea of possession, if not an obsession. Each dynamic pushes you to wonder, how will these people react amongst their fellow shadows once we pass the debut stage?

After all, with them isolated from one another their entire lives, seeing how they interact as a family should be a treat. Especially when you consider how complicated each relationship is. Take note, there is the relationship between dolls, between shadows, and then that of a doll and their shadow. And considering relationships and more might be expected, imagine if two dolls fall for one another and their masters having no desire to mirror such a thing?

Granted, such drama probably won’t make it to the anime, unless there is a time jump, but it does lead to the question of whether we’ll meet anyone’s parents and how they feel about not seeing their kids for who knows how long?

Meeting The Masters & Seeing The Dynamics - 84%

With meeting the rest of the Shadow Masters, Shadows House set the stage for Kate and Emilico's competition, and who both may have to watch for after the debut ends.