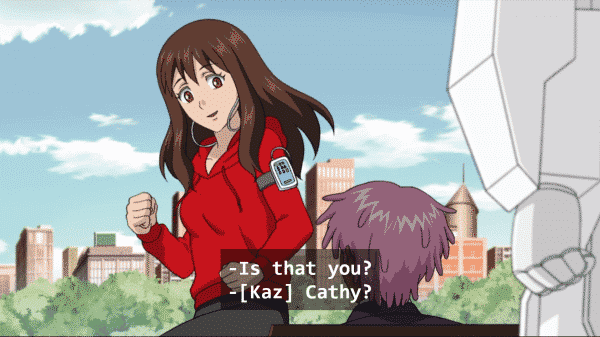 I am almost sensing a Carmichael Show vibe of each episode bringing up a topic but never going to deep into it. The only difference being, there is consistency episode to episode. You know, there has been a question that should have been asked before, but only became pertinent now. Why is Kaz single? He has been on the top 10 bachelor chart and yet only two girls ever tried to pursue him? Much less flirted with him. Something is off.

Yet, in this episode, we begin to understand why he is single: Kaz is a douche. It should have been clear with the way he treats Charles, and his pilot Sadie [note]Apparently AI doesn’t exist yet to the point robots like Charles don’t need pilots.[/note]. However, it especially becomes clear after Kaz takes Lexy and Gottlieb join Kaz on a trip to the Hamptons. Where, after jumping into magical water, Lexy turns into a girl.

With that, you see how far Kaz is willing to take advantage of the situation, despite how uncomfortable Lexy is in this new body. He tries to control her autonomy, questions his femininity publicly, and really just shows his ass. Making it where, when Sadie notes Kaz doesn’t know how to treat anyone right, it really pushes the idea Cathy probably dumped him because he is so selfish and childish. To the point, just imagine what it would be like dating him long term. It’d probably be suffocating if not mentally abusive. Just imagine him picking over how you look all the time, especially in terms of how you are supposed to compliment him. Perhaps another question that has to be asked, but wasn’t answered in this episode, is: What is Kaz to the Kaan family? So far, from Albert, Jeffrey to Agatha, we have only seen white family members. So is it safe to assume Kaz is mixed? Because with magic seemingly being a family inheritance, [note] Jeffrey has water magic [/note] we can’t say he is adopted [note]Though, on that note, what are Aunt Agatha and Uncle Albert’s powers?[/note].

But really, outside of learning not everyone in Kaz’s family is living in luxury, there isn’t much to get out of this storyline.

The Social Commentary Is Getting Better I’m starting to wonder if the first three episodes were really that bad or if I put a Black Tax [note]Meaning, I raised it to higher scrutiny simply because of there being Black people involved[/note] on the show. For while I am by no means blown away, I got to say that I’m starting to appreciate the way the characters are crafted. Lexy especially, for the voice actor doesn’t have that sort of air and privilege that Smith has and with hearing him talk about misogyny, gender expression, and things like that, it threw me off.

If only because, you don’t really hear people who talk or look like Lexy, say things like that. Then, on top of that, it is being shown in a anime style cartoon, [note]What really constitutes as a anime anyway?[/note] I have to admit it is a little bit mind-blowing. Though, I also like the idea, or am growing to like, a Black kid who is a label whore and a douchebag. Especially considering this show is, well I wouldn’t say mixed. If only because I think there are only Black or white characters here, but to have someone like Kaz not be likable and a bit of a douche also seems like something which deserves praise.

Reason being, how many unlikable Black characters are there? Especially when the show doesn’t solely or majority wise, feature Black people? I can’t easily think of any off the top of my head.