I’m not sure who this show’s audience is or what it is building towards, but I strangely feel hooked on finding out. The Black and White Ball is coming up and as Neo Tokio’s top bachelor, naturally, Kaz wants to show up and show out. Problem is, he accidentally brought a Midnight Blue suit. Something he spends nearly half the episode trying to see if he could get away with it. Leading to him asking Helena who seemingly couldn’t care less. If only because she is woke now and seems to be against the capitalistic celebration which the ball is. Thus forcing Kaz, who is all about high society and fashion to choose someone new to be his date: Sailor (?).

With Helena now fully aware of her privilege and desiring to protest, this leads Kaz to pursue billion album selling popstar Sailor. Someone new to town and he tried to get with Kaz before but he turned her down. However, with his options open, the two make a splash of it.

What Kaz doesn’t know though is that Sailor is a demon. Which becomes a bit comical since Kaz gets hired to make sure no demon was already in the museum. Yet, low and behold, he brings one in. One which fights him over this diamond-encrusted skull, because diamonds amplify demon powers, but he defeats Sailor in the end. All the while embarrassing himself in front of the members of high society. Something he’ll surely whine about in the next episode.

I don’t remember where it was, probably “The Read” or said by Tyler the Creator, but it was noted there is a real lack of Black animated characters. This show sort of fills in that gap and, on top of that, it brings a diverse mix. You got Kaz who has pink locks, is bougie, and into high society. Not to forget, is also an exorcist. 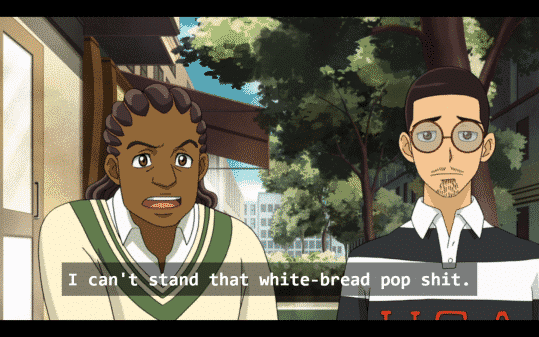 Alongside that, you got his friend Lexy (The Kid Mero) who has an ebonics vernacular and then Gottlieb (Desus Nice) who got a sort of poetry brother vibe. And these three basically are the up and coming kids battling it off with the old money rich and white boys of the east side. Thus far winning the major battles.

Be it the social commentary of Helena, the representation factor Kaz and his friends bring, among other things, I get this vibe that there is supposed to be a deeper meaning here. As if the idea behind this show was they were doing something really special. However, it doesn’t necessarily click in such a way that my sober mind can follow. I mean, I am picking up on some things but be it the fact the show has so few episodes or they didn’t want the budget to explode over the animation or voice actors’ time, you don’t get a good delivery.

In a way, it is like listening to people who became enlightened due to Tumblr. Those who don’t after discovering something rad further, but pretty much paraphrase and repeat what they read without fully understanding it. If only because, to them, because of the way it was worded and who they reblogged it from, they feel no need to scrutinize the thoughts and ideas.