Wherever I Look
Recaps, Reviews, and So Much More
Home TV SeriesAnime Mushoku Tensei: Jobless Reincarnation: Season 1/ Episode 6 “A Day Off In Roa” – Recap/ Review (with Spoilers)
Anime

Mushoku Tensei: Jobless Reincarnation rediscovers its balance between world building, character building, and a bit of ecchi for those who need it.

In total, Rudy has been living with cousin Philip for around a month, and during that time, he met Philip’s wife Hilda and became enchanted by her breasts, and met Philip’s father, Lord Sauros. Now, while Hilda doesn’t like Rudy, probably due to the same reasons Lilia didn’t (she senses he was a perv), Lord Sauros likes him. Why? Well, probably because he is nothing like Paul. He is polite, knows how to speak to people, and has yet to waste his money. For while it isn’t clear if Lord Sauros financed Paul’s education in swordsmanship, it is likely family money that Lord Sauros had a hand in that Paul threw away after raping Lilia and running from school.

Which we will not let you forget.

Being A Perv Runs In The Family – Lord Sauros, Eris, Rudy

While most cower to Eris’ temper, not Lord Sauros. After all, he is the one she models herself after. Be it how he rules with an iron fist, yells to get what he wants, and takes no s*** from anyone. But, while Eris knows she can rule over most in the household, she doesn’t play with Lord Sauros.

Hence why, when Rudy is asked by Lord Sauros to teach Eris magic, Rudy pushing back and saying Eris should learn to ask for herself was dangerous. However, Rudy is a quick study, and it worked. Thus Eris was forced to ask, and because many in the family love beast women, she was taught to pull her hair into floppy ears to ask for Rudy to teach her – thus creating quite the embarrassment.

Yet, Rudy doesn’t end things there, in terms of taking advantage of Eris. For with her fighting against him regularly when it comes to reading and math, he is often chased and beat up, or she hides, to avoid the constant pressure to learn. Leading to, one day, her tiring herself out, and with Rudy unable to wake her, he grabs and feels her breast as well as attempts to take her panties off. Not to do as his father would, but you know Rudy is a perv and wants to add to his collection. 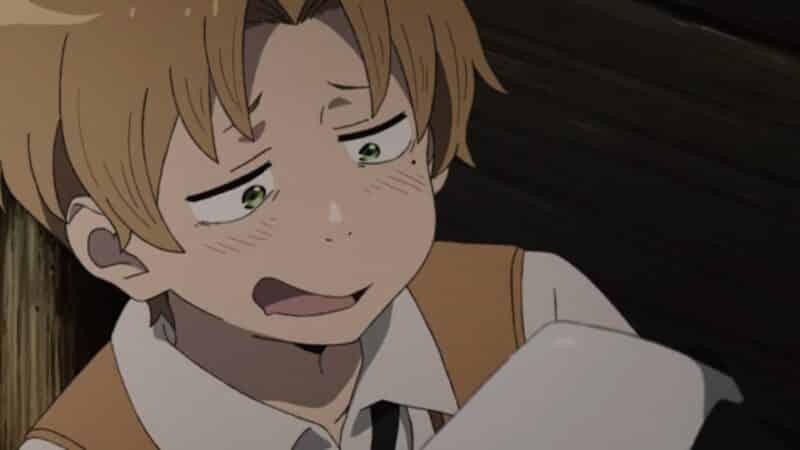 Thankfully though, Eris wakes up and beats the hell out of Rudy. Which he should be happy that is all she does because I don’t think Philip nor Lord Sauros would appreciate hearing how Rudy was in such a position with the princess of the manor.

Rudy being a creep like his father aside, there remains the issue of how to get Eris interested in learning? The first thing tried was to have Ghislaine, who is also learning how to do math and read, exhibit the importance by sharing her stories as an adventurer. For example, she was in this group that included Rudy’s parents, and when they disbanded and Ghislaine was on her own, money issues led to her starving and eating monster dung to survive. So, knowing how to do math means less vulnerability in the real world.

For some time, Eris eats that up, but then she falters. So, Rudy decides a day off, once a week, will help, and since Eris is curious, he brings math into their day-offs to reinforce what Eris has learned. This works and is easy to maintain, so there seems to be a success here. Heck, even beyond being her tutor, you could even say Eris is bonding with her little cousin. Hence her desire, especially after hearing how much he is paid, to buy him a gift.

The Balance Is Back

For a minute, it seemed Mushoku Tensei: Jobless Reincarnation may have lost its greatest asset. For while it was understood Rudy was in new territory, so there was an adjustment period needed, we’re halfway through the season, and that is when a show can potentially falter. Yet, with learning about Roa, Fittoa, and more, things are back on track, and this remains a must-see anime.

Focusing on the world-building, learning Roa is the city, Fittoa the region, and Asura the kingdom, to seeing Perugius’ flying castle, the world Rudy lives in was fleshed out quite a bit. Heck, even with learning his and Ghislaine’s pay and how that translates to Yen, it helps the immersion since now you understand the value of things. Thus making Roa, and the rest of the world, just a setting, but somewhere you may not be able to go to, but have some concept of how things work and translate from your culture to theirs.

Be it meeting more of Rudy’s extended family or understanding Ghislaine’s relationship with them, many evolved and showed themselves. For example, Lord Sauros, and his actions, help you understand not only why Eris is how she is but why there are so many beast-human types. Thus furthering that, as Paul said, people in his family are womanizers. Though, revisiting the Ghislaine note, I really loved her story about being in a group and the benefits it gave her. Not just in terms of fighting, but because it revealed how vulnerable it left her in regards to money. This isn’t something you hear soldiers or warriors talk about much, especially not in a jokey way. So to see her at the table, trying to learn so that she can grow as a person, it makes you love a character who could have easily blended into the background and not have said or done much.

How Rudy Adapts To His Surroundings

From learning how to talk to his uncle (?) to adapting to Eris so he can not only get along with her but teach her, you have to admire Rudy’s abilities to adapt. Especially considering who Rudy was in a past life. So his ability to adapt to Sylphiette, speak to Ghislaine, learn how to make Eris palatable, and even speak to men and form good relationships with them? It shows that, in Rudy’s past life, he was probably capable of much more than he gave himself credit for.

I get Rudy is a perv, but him feeling up on Eris, then trying to take her panties, that’s where we draw the line. Add in him getting that “medicine,” which sounds like it would allow Rudy to possibly do more, uninterrupted, it gives us pause. For as much as Rudy might be physically 7 or so, we cannot discount he has the mind of a 40-year-old man and said 40-year-old man just molested, assaulted (not sure which term is appropriate) someone who is 9. Never mind, with that potion, who knows who or what he planned to do with it.

How Rudy Adapts To His Surroundings - 88%

While we don't appreciate Rudy's assault of Eris, everything else about episode 6 "A Day Off In Roa" reinforced what we love about Mushoku Tensei: Jobless Reincarnation.