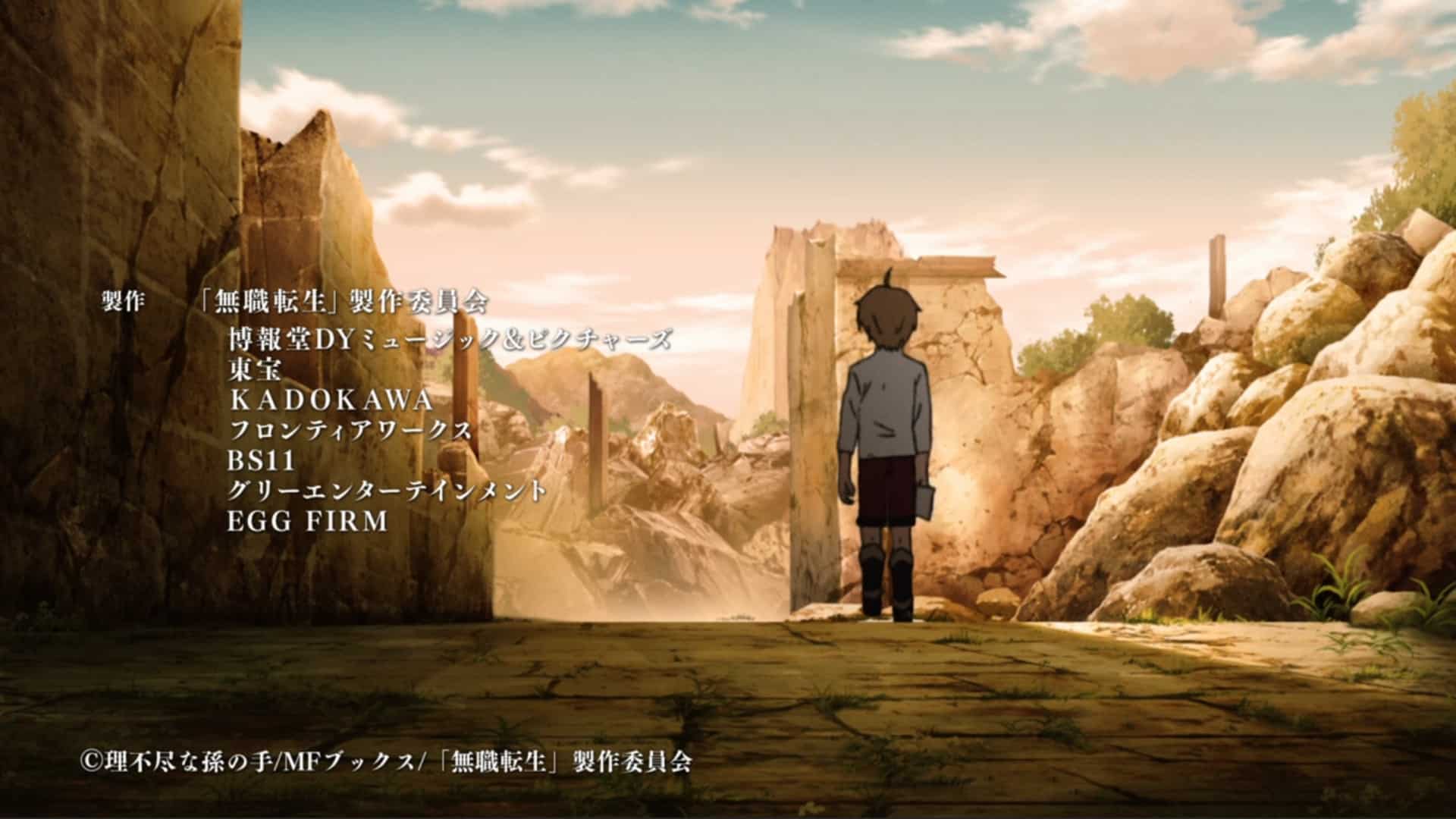 In what is partly a recap episode, the completely unexpected happens left and right as Rudy and Eris finally make it home.

With coming upon Rudy’s former village, a desolate wasteland befitting of a horror movie, Ruijerd feels like he accomplished what he said he would. He got the kids home, and with that, he plans to take his leave.

This, as you can imagine, isn’t what Eris or Rudy want to hear, but thanks to Rudy, Ruijerd has made gains in healing the reputation of his people, and he has more work to do. And while, yes, he could follow Rudy to the ends of the planet, it seems Ruijerd realizes these two, though not even 16, are coming to the point where they don’t need him anymore. So, with that in mind, he lets them grow by letting them go so that he doesn’t stifle them.

While losing Ruijerd is devastating, Rudy and Eris are reunited with Ghislaine, who doesn’t look much different from before. But before they can talk about visiting Ghislaine’s village, where she has been, or where they have been, the immediate question is what happened in Fittoa and to Eris’ people.

The answer? Everyone is dead. More specifically, Eris’ mom and dad died after the teleportation took them somewhere and Eris’ grandfather, as we saw, was executed and blamed for the whole event. But, to make matters worse, Alphonse, the representative of what remains of the family, notes that Lord Pilemon Notos Greyrat, who I believe is Rudy’s uncle, wants to take Eris as his concubine.

What is Eris’ reaction to all this? Mainly silence. Rudy is the one flipping out, alongside Ghislaine, but since Eris has seemingly long come to accept the possibility of everything she is being told, she just asks for a minute to herself. After all, it is one thing to think of the worse but hope for the best and another to have every bad thing you thought of confirmed.

But, after all is said and done, that night, Eris visits Rudy to talk about what’s next, in minor detail. Mainly, her focus is on what’s next for her and Rudy, including sex. Though the agreement was when Rudy turned 15, Eris beat him to the punch and aks this of him, seemingly to feel close to someone. 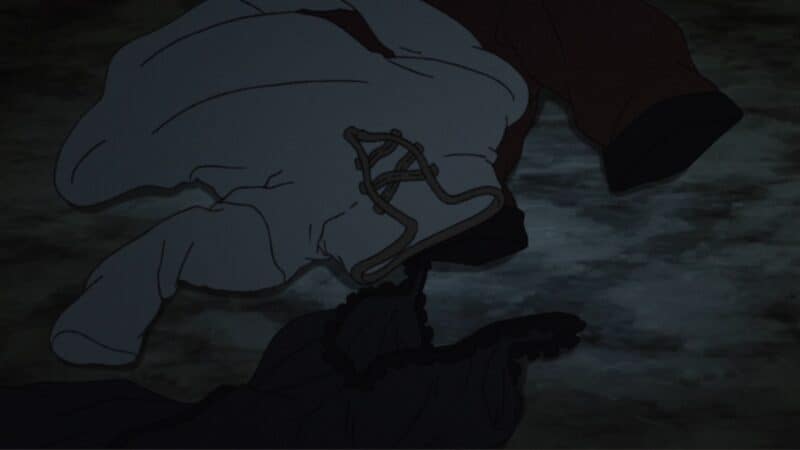 At first, Rudy thinks this isn’t a good idea since, while a perv, he isn’t exploitative, and he knows Eris is dealing with the trauma of losing her family. Yet, she seems to be very much aware of what she is doing and what she wants, and with Rudy having an erection and being given consent, they have sex.

The Silver Lining Was Lightning, Not A Glimpse At The Sun – Rudy, Alphonse

Thus, the following day, Rudy was happier than we have ever seen him! Well, at least until he sees Eris’ hair on the floor and a letter to Rudy noting they are not well matched. Pair this with Alphonse saying Eris and Ghislaine went off somewhere, and Alphonse was explicitly told not to tell Rudy where. This makes it so that while Eris was talking about having no one and presenting feelings of abandonment, she seemingly dumped those feelings onto Rudy. Who, yes, knows his father and younger sisters are alive, but how could they compare to the two people he spent the most tumultuous years of his life with? Never mind the first person modern-day, or past Rudy, had sex with?

It Moved Things Forward While Reminding Us How Far We Came 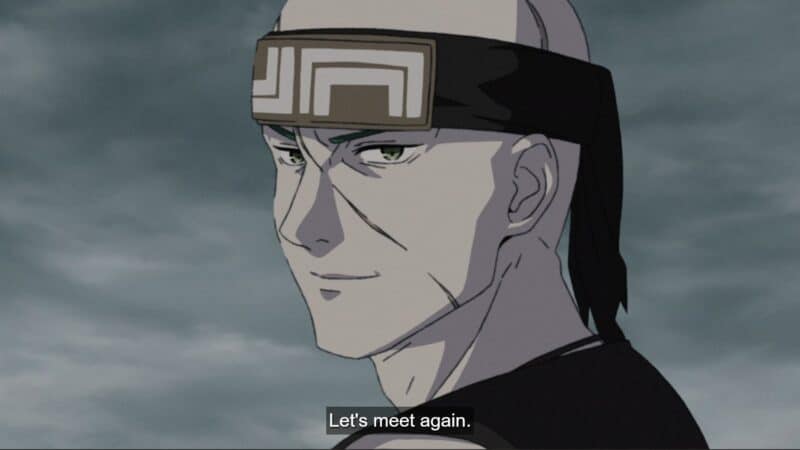 From what it appears, this is the penultimate episode of the season, and who knows whether it will be for the series? So to cover everything since the first turning point, while making it clear we are closing a major chapter in Rudy’s life, it stirs up your emotions a bit. I’d even submit, I wish more anime would do their recap episodes like this, rather than making them feel like filler.

For with Ruijerd leaving, Eris, and Ghislaine, before there could even be a real reunion, that was a lot. Add in Rudy’s first time and him being on his own for the first time ever and, it’s hard to not get overwhelmed by emotion. Especially since you can see Rudy already getting affected by the idea of being alone, through us seeing the old him feeling like everyone he knows and loves leaving him behind. So I must admit that I’m wondering what’s next for him, all things considered? Because, why a guilt member, he doesn’t have a group anymore.

Clues About Where We Are Going Next

With Sylphie alive and no word on Zenith’s whereabouts, we’ll have one of two things. Either Rudy will seek to reunite with his father, or Rudy will seek the girl who was the first love of his life. Someone who, even in his dreams or nightmares rather, he can’t imagine how she looks. Yet, with Rudy likely in a mindset where he needs something, or rather someone familiar and with whom he had a foundation of friendship, I think he’ll likely seek out Sylphie than his mom. If only due to him hoping, if not outright relying, on his dad to handle that task.

Mushoku Tensei: Jobless Reincarnation: Season 1/ Episode 22 “Dreams and Reality” – Recap/ Review (with Spoilers)
Trajectory: Climbing
At this point, this might be one of our top shows of 2021. Yes, there are some elements, like a 30 to 40-year-old man, in a 13-year-old's body, having sex with a 15-year-old, which weird us out. Yet, everything else about the show stirs up your emotions in a way that, while you can never let go of how creepy certain parts are, it rarely eclipses the entire program.
Highlights
It Moved Things Forward While Reminding Us How Far We Came
Clues About Where We Are Going Next
Disputable
86
Follow Wherever I Look on Twitter and Instagram, Like us on Facebook, and Subscribe to the YouTube Channel.