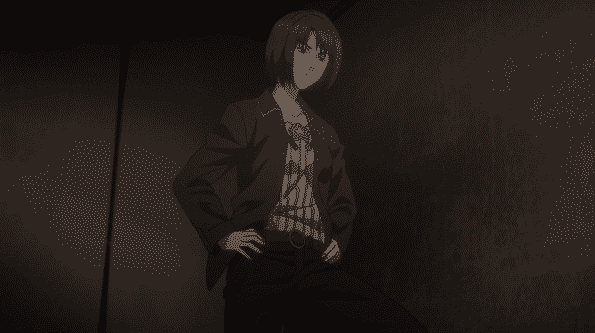 As some of the rules of the stasis are established, there are tests to see what the overseers may and may not allow.

From what it seems, Juri’s family aren’t the only ones with a stone which allows access to the stasis. Sagawa’s family, clan, or group, also have a rock of their own. On top of that, they have a whole religion based around what goes on in the stasis and The Handler, or The Herald, called Harold in episode 1, is their god. Now, as for whether Sagawa and Shibata’s goal is anything beyond controlling the stasis is hard to say.

What is made clear though is as much as Majima may have made a quick rise in rank over 6 months, she isn’t necessarily in agreement with The Genuine Love Society. If anything, it seems she maybe belong to another family who had a stone and just wanted to, for the first time in 17 years, return back to the stasis. For what? Well, we aren’t told. 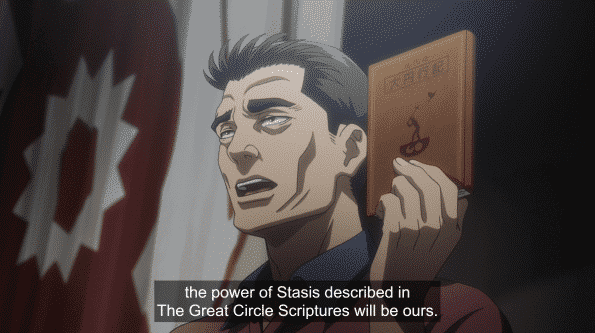 Who wrote the book?

Even though the question isn’t likely to be answered, I’m wondering where do these stones come from and how many are in existence? Making the assumption Majima’s family had one, that would be three which allow access to the stasis world. But, for one reason or another, Majima’s family no longer has theirs or she doesn’t have access to it. Why?

Also, considering what Sagawa is trying to do, is it safe to say that one family can use another’s rock to enter stasis? The way it seems, you need to use your own blood to call on the ancestors to allow you passage into stasis, but can bring outsiders. So, with that in mind, is it solely worth taking another family’s rock to prevent them from entering the other world? Even if, based off the handful of rules we know, you seem limited on what you perhaps can and cannot do?

Rules of the Stasis

The full rules of the stasis remain unknown but one thing is made quite clear – causing harm to someone not in stasis means a Handler or Herald will pop up and perhaps kill you. Also, when it comes to things like teleporting, among other things, it relies on those spirit things connecting with you. In fact, they seem to be the ones who enable people to enter the stasis world. Hence how Tsubasa seemingly becomes animated.

Oh, and it should also be noted, this whole situation of Juri, grandpa, and Takafumi ending up in the same moment of Stasis as the Genuine Love Society is insanely rare. I’m talking, they would have to perfectly sync up with them for that to happen since, as grandpa explains it, a moment of stasis is like a frame in a film. 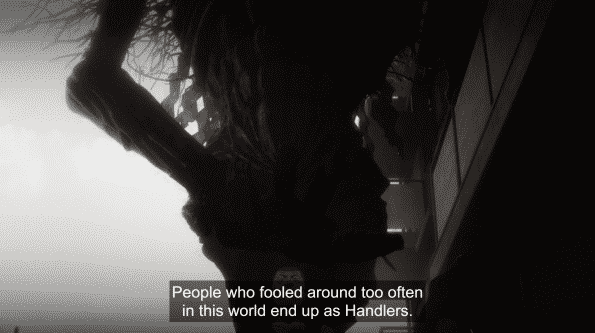 Sort of piggybacking off the last comment section, there comes the question of what happens when you try to use another family’s rock? Do their ancestors come forth and kill you for clearly stealing an item of their family? On top of that, Grandpa Jii-san explains to us that Heralds, and many of the otherworldly looking things, likely are ancestors.

With that in mind, could stasis be the afterlife in some way? Would that be farfetched?

Thanks to his unreliable teleportation power, which seemingly is unique to him, Grandpa is able to get him and Juri far enough away from The Genuine Love Society to take a breather. However, in planning their next move there comes quite a bit of issues. First and foremost, while their best bet would be leaving stasis and jumping back in, when the Genuine Love Society would be absent or frozen, there comes the issues of Takafumi. Being that he was too far to reach, he has been taken prisoner. So, for grandpa’s main plan to be put in action, Takafumi has to be rescued. Thus leading to this old man, with an unreliable teleportation ability, to try to rescue his son.

However, while he does this, he asks Juri to get the stone and this is when the issues begin. First and foremost, there is no one in the Genuine Love Society’s house, compound, or whatever you call it. All that is left there is their stone and evidence that they have been watching grandpa’s family. Leading to him realizing, they have trapped his granddaughter. Someone who walks into their home and is immediately attacked. I’m talking, at least 5 men to one and on top of killing her, some are talking about raping her. For while the murder is seemingly just for the sakes of making it look like the Yukawa family disappeared, if not make it look like someone of the family did it, it seems the Genuine Love Society hired some outsiders for the sake of numbers and they are straight up heathens.

But, considering what happens as Juri is seemingly dying, they may regret what they tried to do.

Okay, what exactly led to the formation of the Genuine Love Society? What is so grand of a plan for them that they either have members or have hired rapist and people capable of murder? Much less, can follow an instruction of murdering in just a particular way so it looks like a family member did it? If not, the Yukawa family simply disappeared? Because, in the long run, while half of the family, now all but 2 we know of, are active within stasis, there remains 2 who exist in reality still. How can they be handled without issues? Though we haven’t been made aware of any friends these people have, Makoto is in school so it isn’t like a kid can just go missing and it would be treated as no big deal. Same goes for Juri and her sister. They are out there in the world so them just going poof is going to lead to police reports, among other things.

So, after killing most of the family in stasis, would the plan just be to bring the rest, kill them, and then wipes their hands of the blood?

Though we only just learned the names of the main members, and arguably not much else, there is something about them and their beliefs which are intriguing. As if, while Sagawa and Shibata could very well just be manipulating a bunch of fools for ill purposes, at the same time that might not be true. Like many a religious person, they maybe under the impression what they’re doing is just and they are taking Juri’s family rock because they don’t deserve or perhaps understand what they are in possession of.

Which crafts the idea that, taking note of their actions of kidnapping, violence, and allowing for a murder, it sort of shows the dark side of religion, in which it devolves or evolves into fanaticism.

I finally caught up with this one and watched the first two episodes yesterday. I’m intrigued by the mystery and also worried we won’t get a satisfying answer. Hopefully it does manage to do something with all its ideas because so far it has been interesting. Thanks for sharing your thoughts on it.

Can’t wait to see yours