Kokkoku presents an oddly satisfying opener which makes the death of Anime Strike something to celebrate.

22 Year old Juri, a senior in the education department of a local school, is just trying to get a job good enough to move out. For while she loves her family, with the majority out of work or struggling, she just wants her own life and own problems to worry about. However, the same day of a big interview her brother Tsubasa and nephew Makoto get kidnapped. Then, to make matters worse, the kidnappers want 5 Million Yen within 30 minutes or both will die.

This sends Juri’s unemployed father, Takafumi, scrambling for the money until his father Jiisan brings out this rock. A rock which somehow puts the world in stasis and with the world stopped, so comes the belief that maybe Tsubasa and Makoto can be saved! That is, until they learn others can stop the world and this leading to them being assaulted. At least until a giant monster, Harold, appears. 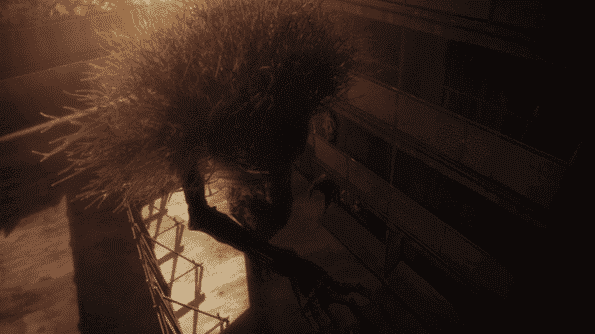 The various layers to this show almost makes you wonder how come something wasn’t screwed up? We have this sense of normalcy through Juri, this girl who wants independence from her loaf of a father and brother, and to begin her own life. Alongside that, this idea that her nephew maybe the last hope for a decent adult in her family, while comical, also is relatable depending on your family dynamic. Pair this with her coming from a interview and thinking she flopped, and you get an almost slice of life vibe, with slight dramatic elements.

But then there is a kidnapping, grandpa cutting his hand to drop blood into a stone, these white ghostly things floating about and everyone being warned not to take their hand off this walk and then the stasis world. Not to mention this mob which lives in the stasis world and the show being very equal opportunity when it comes to violence.

To summarize my feelings, it is amazing how the show presented something which seemed so tranquil and boring and then upped the ante to the point a 23 minute episode felt like it was only 6.

I don’t know who the leader is of this stasis mob, what the hell “Harold” is, or whether Juri and her family may get out of this situation intact and alive, but I’m invested in figuring out if they will. To the point that, even if Anime Strike still existed, I’d be cool paying what little money they wanted just to know what happens. For this is perhaps one of the most interesting anime I’ve seen, which didn’t have some romantic element, in quite some time.