Kokkoku comes to a uninspiring end that decides to push a character who, at the last minute, could give Juri hope.

The explanation for Sagawa becoming a baby is the specters broke down his body, his memories degraded, and then they rebirthed him. And not too long after that, goodbyes are said and one by one people are expelled. Leaving only Juri, her grandpa, and baby Sagawa. Which, for a while, was nice. However, as it becomes harder and harder to accept fate, Juri expels her grandpa, not too long after promising to let him choose when it will happen. Perhaps one of the only noteworthy bits of this whole part was Juri talking about things being explained to her mom. For me, I thought her mom was gone, dead, or something similar. And yet, so it seems, she is just someone even less focused on than Sanae. But, with her being noted does remind you of how little we learned about Juri’s family despite being with them for 12 episodes.

For around 132 days, Juri takes up being Sagawa’s mom. She learns what his cries mean, steals so he can eat, and tries to teach him words and what things are. In fact, the routine becomes so naturally there is a moment she is tempted to keep him trapped in stasis with her. However, no sooner than that thought hits, and with knowing his neck is strong enough, he gets expelled.

Here is the thing I kind of don’t get, does it more so matter where you expel someone or where you set their body? And I say this because, later on, Juri finds herself where this stranger took her out. However, that woman uses a different means to get in and out of stasis. So it makes me wonder how much of an effect do you have on people when in stasis? We know you can, attempt, to kill them, but if you were to move them all to a river, would they only drop in once you got out of stasis? Otherwise, you arranging them would have no influence on their present?

But, with that in mind, if you wait half a year and come out of stasis, does that mean you are now rewriting the timeline or jumping forward in time? 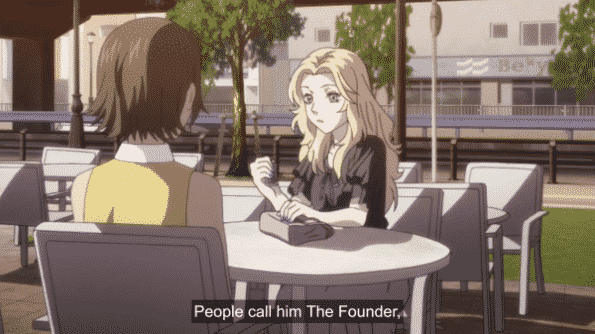 At around day 197, Juri decides it is time to get away for awhile. Do some drinking, maybe walk far away from home, sleep in department stores, and find distractions. However, there comes a point the depression she can’t run from and she begins to turn into a Herald. Which Makoto’s weirdly shaped friend stops, the first time, and the second time is by a blonde woman. Someone who tells us she is the true founder of Stasis and her deceased husband made the stones.

Yeah, they really throughout that on the last episode. This woman, supposedly born with a specter in her, can easily go in and out of stasis and ends up being Juri’s ticket home. Where she finds her grandpa waiting for her.

Leaving us with, during and after the credits, seeing the new routine. Juri is officially recognized as Sagawa’s mom and Makoto’s cousin in a way. Takafumi is still a bum but it at least seems Juri’s brother has a job. As for Juri? Well, it isn’t clear what is going on with her besides motherhood and, generally speaking, we don’t really learn what happened to anyone outside of Juri’s family. So whether Majima and her family are at peace, especially her brother, is unknown to us.

What’s worse: This random blonde woman, who we learn can enter and exit, with other people, stasis at will showing up; her explaining her husband made the stasis stones, somehow, and lived 200 years, without going deeper into how that worked; or us not getting to know what became of Sako, Majima, and the rest? There is always, in the back of my mind, this thought that maybe an OVA will come to clean up what mess was left but like second seasons, OVAs aren’t necessarily a norm for anime. Especially considering this is an Amazon Prime exclusive, at least in the US, so it pushes you to question if there will even be a serious enough demand to do a follow-up.

Plus, with Amazon just licensing the show, seemingly not helping with financing as Crunchyroll and seemingly Netflix does, it leaves us with this crap of an ending. Which, YAY, is happy for Juri, but introduced a slew of questions, due to the blonde woman, and leaves us hanging about characters we have gotten to know pretty well. Never mind all the other questions, like those mentioned in the second topic, that go unanswered.

Lack of explanation was always going to be this show’s downfall. What get’s me is they didn’t even really try to give us enough to piece things together and basically nothing makes sense. It all just happens because it does.