It’s a rather strange episode as Sagawa being humanized continues and Juri comes to terms with the inevitable.

How I Became The Man I Am: Sagawa, Juri, Grandpa

Sagawa continues his story and we learn that after his father’s affair, 5 years later he died and with his death, Sagawa wanted out. However, his best friend, whose mom was having an affair with Sagawa’s dad, he wanted things to continue. He wanted to be like Sagawa’s dad and use the money and prestige to live a nice life and get a bunch of girls. As for Sagawa, as you can imagine, being trapped in such a circumstance makes you angry at the world and with destroying his father’s alter he discovered the stone which allows stasis. Thus inspiring the chain of events which led to the present. 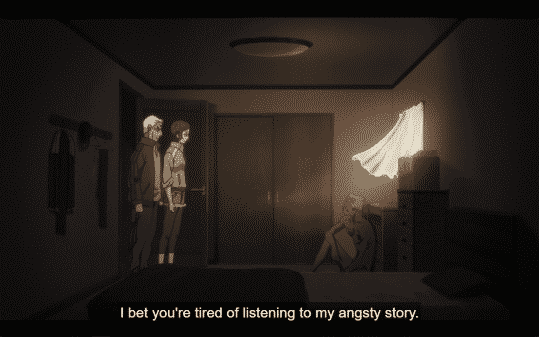 When writers put in how they know you are tired of listening to a character, it is hard to say if that should be funny or sad. But let’s be real, Sagawa’s backstory doesn’t really inspire you to feel bad for him nor does it justify his actions. He became a bastard because his dad cheated on his mom and the church and he was trapped by his so-called best friend. Okay.

And don’t get me wrong, I get him losing his innocence and being trapped in a toxic environment would cause animosity on multiple fronts. My issue is that this was given to us in such a way to cheaply inspire sympathy. Hence why Juri seemingly wasn’t that affected.

Despite what Sagawa has said, be it his pity party or knowing a way Juri could escape, she goes to expel him. She does so multiple times and then, out of nowhere, Takafumi stabs him with a sword. Leading to Sagawa becoming essential organs and dust. Of which becomes a cocoon. Don’t ask why, don’t ask how he escaped death because nothing in the stasis can or will be explained – just go with it.

Which is what everyone does. Majima keeps watch as it is questioned what do next. Leading Juri to begin her plans to expel people, and the first one she tries to do is her grandpa but he teleports before she can. So he gets skipped. However, Makoto does get sent back to reality and Takafumi ends up joining him. But, with Takafumi, it isn’t in some sweet goodbye.

You see, while a cocoon, Sagawa is a suspended cocoon with razor-thin vines sucking the energy out of every plant and animal. And those razor-thin vines, Takafumi decides to be an idiot and runs into them and loses his fingers. So, to stop the blood, out he goes from Stasis and he is placed in front of a hospital. Thus making it so Juri doesn’t get the chance to say goodbye.

But, what she does get to do, with discovering her powers can safely destroy the increasingly numerous amount of wires Sagawa has, is guide everyone to safely be close to see her finish him off. Leading to her expelling the cocoon and ending up with… a baby Sagawa. 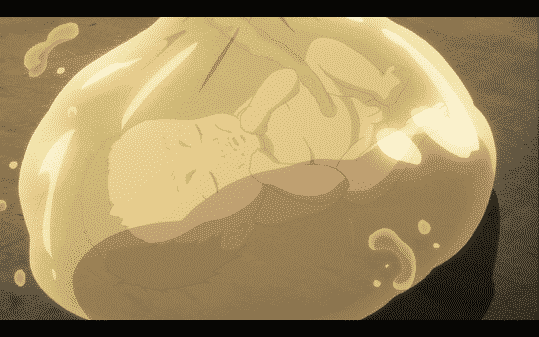 What? I mean seriously, huh? How gung-ho were the writers on redeeming Sagawa that they made him become a baby? Much less, how did he go from adult to herald, to now being reborn as a baby? Nothing makes sense and I honestly am not even invested enough to try to think of clues that could make this seem feasible. For spending 10 – 15 minutes talking about this man’s childhood doesn’t make me feel invested in his redemption.

And to be honest, while we have spent the whole season with Juri’s family, her losing access to them isn’t that tear-inducing. There hasn’t been much in the way of relationship building in this show. Then, in terms of character development, the only notable kind is Takafumi becoming increasingly annoying with time. I would say Majima is an exception but how Sagawa’s past was revealed, that is how Majima’s was handled and ever since, outside of switching loyalties, she hasn’t really done something remarkable enough to maintain your attention.

Really pushing this idea that this show really needs a big finale. For while it is by no means terrible, it also has somehow found a way to string us along on this idea it has potential. Even up till now.

I’m a little behind this week and haven’t seen the episode. This seems kind of as expected given I kind of gave up hoping for a satisfactory conclusion a week or two ago.