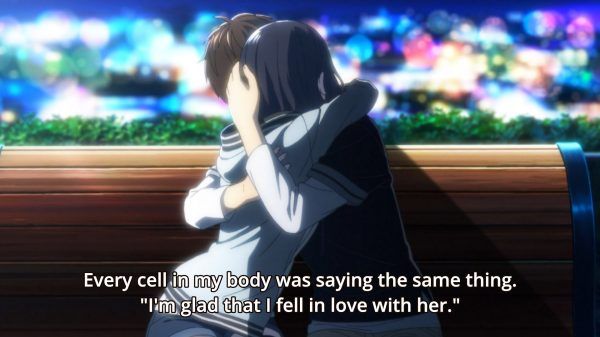 So, Koi to Uso may very likely be one of my favorite shows of the summer. Live action shows included.

Starting in 1975, the Japanese government initiated the Yukari Law to combat low birth rates. The gist is, at 16 years old, based off genetics and other information, the government matches you with an opposite gender partner. Something that in our story we may see rebelled against. Especially for Neji and Takasaki who have been holding onto a crush for 5 years and they confess it the night before Neji’s 16th birthday. The one in which he ends up getting a text that he is assigned Takasaki but two government agents, who find him in the middle of the night, let him know he is actually assigned to someone else.

Leaving Takasaki ready to accept the government’s decision but Neji wanting to fight for the fate he wants and feels he deserves. 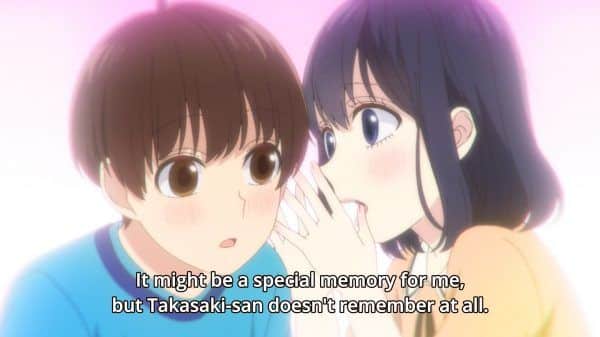 Urgh, the amount of cringe which comes from relating to what Neji was going through. Not just in terms of the awkwardness of talking to his crush, much less confessing, but the catalyst of it all. Like how one simple gesture ends up being your drive to a better life. For Neji, it was breaking his eraser in half and with Takasaki saying thank you, it was over. He was infatuated and step up his game just to be worthy of her.

That hit me right in the feels. Making it when she confesses she had a crush on him too, I was about to have those happy tears. Only because it was so beautiful.

You Don’t Want To Take Eyes Off It

It is sadly rare for me to not pause something every few minutes and check out different websites, write a bunch of notes and what have you. With this anime though, I didn’t want to have a moment’s disconnect. I wanted to keep that connection with Neji and his emotions strong and consistent. I wanted to take in, vicariously, both the strangeness of him waiting a good 5 or so hours for Takasaki to show up and all the happiness which came when she did. For something about it just warmed my heart and makes you just want to reminisce over your first love. The first requited love that is.

You Want To See Where This Is Going

Though Neji has plans to rebel, what about this girl Lilina? Is she too looking for authentic love or maybe was waiting for this day? She seems curious as to who she was matched with and Takasaki gives the impression Neji is a catch. Will she fight for him? Could it be they get married yet live separate lives and have full blown affairs? Maybe share Neji in some, “You have him during the day but he comes home to me” kind of thing?

Excuse me for the overdramatic theories but I’m excited.

I gotta admit, Neji waiting from 6 PM to sometime around 10, when the cops told him to leave, and yet staying another hour waiting for Takasaki I couldn’t wrap my head around. Waiting one hour, I could understand. Maybe a car broke down, a bus, she had homework, etc are excuses which would run through my head. However, there comes a certain point where you aren’t being optimistic but kind of pathetic.

And while, yeah, the show bounces back and Neji gets a sort of happy ending, I still side eye that long ass delay.

Would You Date Neji?

Here is the problem with a lot of anime: The male love interest is basic. Neji says himself, he is completely average. All he has going for him is that he is a nice guy and he tries hard. Something which is admirable. However, on the other end of things, apparently, Takasaki got confessed to twice already in the month. Now, I get she was left smitten by the whole eraser thing too, but with him noting how much he had to step up to be worthy of her, I feel the need for a pause.

If only because I can’t tell if Neji is your usual basic anime guy or not. For the with him noting he put effort into being worthy of her, that dispels the usual “This is some male fantasy of doing nothing but having your dreams come true.” Yet, Neji is written to be so much like the average guy that I feel like he is written to be relatable but is really going against the grain.

I mean, first and foremost, he asks her out episode 1 and isn’t pining over Takasaki. Yet, I can’t get past her feeling the same way and saying nothing 5 years. Not that I don’t get Japan is probably more traditional, in terms of gender roles, than the USA, but a lot of this just leaves me very conflicted. Like, the big picture is beautiful and can make me teary eyed but when you analyze certain details, it is all too convenient. If not a sort of evolved version of many male fantasies. 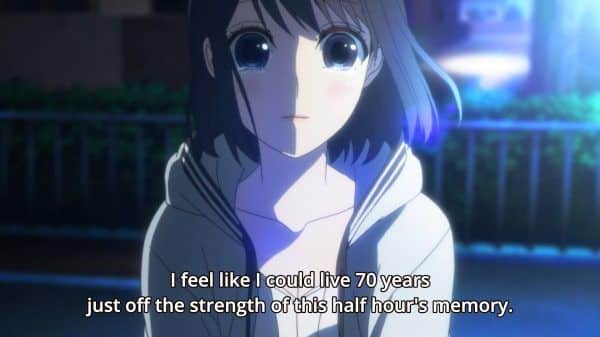 I’ll admit that someone planting the thought this could be summer’s Scum’s Wish is what got this on my calendar. However, what is making me want to commit to the series is that it seems less geared toward becoming a soap opera. Yes, Takasaki just waiting on Neji to say something, after 5 years, makes you want to roll your eyes. Also, Neji waiting 5 hours, at a playground, for a girl seems kind of ridiculous. Much less her showing up 11 PM on what assumingly is a school night. However, the foundation is laid down so well that it is hard to dwell on the cracks.

Hence the initial viewpoint that this is worth watching. It gives us a solid foundation, a lot to think about when it comes to Koi to Uso’s future, and it may give you the feels. I know it did for me, which I wish it didn’t.