It’s the final episode of Koi to Uso (Love and Lies) and so comes the question of: Who ends up with Yukari?

I Found An Out For You: Yukari, Ririna

Thanks to Yukari, then Takasaki, Ririna has found herself having a much more fulfilling life. No longer are her days solely dedicated to studying and isolating herself. She goes out, makes memories, has friends, and even got a taste of love thanks to Yukari. Yet, she has come to accept that the love she is on the brink of having for him, may not be reciprocal.

Something she can accept for just having Yukari in her life has been magical. He is the first friend she ever had. Making it so, all he has given her from the ability to be vulnerable, trust someone, and know how love should feel, sound, and how to give it in return – she’ll be able to do that.

But, before she and Yukari fool their assigned government worker into thinking they are a bad match, something she estimates will take 6 months, she asks for something. She asks to further her experience with kissing. After all, her first kiss with Yukari was awkward, forced, and didn’t leave her feeling as she thought she should. So, they kiss again. Then again. Following that, there is some tongue action and it helps you realize that these two may be working out whatever feelings they have out of their system. That way, as they pretend to hate each other, it might be just a little bit more easy to keep up that lie.

The Way I Feel About You: Nisaka, Yukari, Takasaki, Ririna

A week passes since that makeout session and now Yukari is racking his mind for answers. He felt something with Ririna. It wasn’t just her who changed thanks to their friendship. Because of her, he too has evolved and become more capable of being outgoing and arguably a better potential mate to Takasaki. However, maybe there lies the problem. Everything Yukari had to do to be deserving of Takasaki was hard work and yet with Ririna, as awkward as things could be, they came a bit more naturally. Especially since she worked through the awkward moments with him.

All the while, Nisaka is on the sidelines watching. Someone who, arguably, is waiting for his notice and prepping not only for the disappointment and to disappoint, but to continue his lie. For he too has been affected by Yukari’s charm and yet, unlike these two girls, he can’t even compete. If not, for a better word, experience mutually shared joy. All he can have is the occasional compliment and remember that stolen kiss. Making it so, as he pushes Yukari to choose one of the girls he isn’t really lying to Yukari as much as keeping a secret. One his poor heart desiresso much to let free. 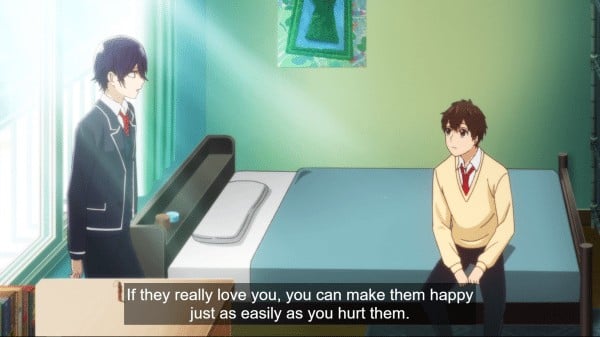 Yet, off Yukari runs to the two young women he loves. But, what kind of love is the question here. Lust isn’t a factor, but there is an acknowledgment that all three are too young to decide on forever. All they truly know is that, here and now, each one makes the other feel special and they don’t want to see one another hurt. So we end the show without a final resolution as to who will be with who and who will end up matched to someone else. Maybe a bit sorrowful, but at least happy that their two best friends found the one they were meant to be with.

Showing Love and Intimacy Are About More Than Sex

A lot of the time, sex is treated as the pinnacle when the focus are teenagers or young adults. That is what defines love, that is how you can tell you are compatible with someone, but Koi to Uso avoids that. It squares in on the idea of compatibility and the idea that relationships are work. Which was such a treat.

Take for instance the relationship between Nisaka and Yukari alongside Yukari and Ririna. In both you see the importance of a person knowing how to talk to you, deal with you at your best and worse, and how that allows both sides to grow. With Nisaka, Yukari’s friendship and his trust in him created this type of intimacy. One which made it so whatever old wounds Nisaka had, they were able to heal. Thus Nisaka was able to go back to enjoying being a participant, to wanting to engage with people, and even try to participate in people’s personal lives.

Alongside that, the love that Yukari shared with Nisaka allowed him to understand his own feelings. For whether his queer feelings were new or old, in a lesser way than the girls, he too was able to experience what it meant to have someone care for him deeply. Showing a love I’m sure Nisaka would have wished could turn romantic, but instead showed that the love between two guys, even when platonic, can be world changing.

Then with Ririna, as much as we hear and see how much Yukari loves Takasaki, with her we get a real good glimpse of what love is in action. For, in my mind, what Takasaki and Yukari have is wish fulfillment. A longtime crush that both fulfill in pieces, but with them not spending time together, it is like they never leave the infatuation phase. Making it so, as much as we hear how Takasaki changed Yukari’s life, by him trying harder to earn her, arguably all she did was make him a better man for Ririna.

Maybe not in the clearest way, at first, but as time went on, it started to make sense why Ririna was Takasaki’s match. For one, they both were very awkward with the opposite sex and, for Ririna, people in general. However, as seen with Nisaka, Yukari has this sort of patience, optimism, and sort of friendliness of a puppy which melts the disenfranchised or loner types.

Making him quite the match for Ririna since it leads you to notice how they balance each other out. For as much as it is harped that he changed her, let’s not forget that she showed him what love was outside of physical intimacy. Ririna showed Yukari what it meant to date a girl and have her be more than an infatuation but an actual person you deal with day in and day out. Someone whose feelings you have to take into consideration and how to work with them when you hurt them.

And in the long run, she taught Yukari more about love, intimacy, and even being a boyfriend, than Takasaki ever did. For really, all Takasaki ever did when it comes to Yukari, in the grand scheme of things, is teach him how to make out and strive to be a better person. Though not necessarily for himself, but to earn another.

A lot of this review has been more season than episode based, as you can already tell thus far. However, one of the things which sort of irks me is that Nisaka didn’t get to experience more. Granted, does it seem at all that Yukari would share his feelings? No. However, it would have been nice for Nisaka to have confessed, or even said he loved Yukari. Which, more than likely, Yukari probably wouldn’t get that the words were more romantic than friendly, but at least we would have got a consolation prize out of this Nisaka storyline. A true rejection but still an everlasting friendship.

Takasaki Isn’t That Into You

After a certain point, it grows tiring to hear how everyone is trying to protect Takasaki. Especially as she becomes less and less interesting of a potential love interest. For, as just noted, there comes a point where you really wonder if those two will ever pursue, Takasaki and Yukari that is, getting out of the honeymoon phase.

I mean, noting Takasaki being kind of hot and cold toward Yukari, it is like, just as their relationship seems like it could be serious, she puts a stop to it. For understandable reasons, due to Ririna being assigned to Yukari, and later becoming Takasaki’s best friend, but it really becomes frustrating after a while. Especially with Yukari since it seems Takasaki becomes less this girl he loves and more so the girl he worked so hard for, since middle school, that to just give her up now means all that he worked for would mean nothing.

Which is why I think Shuu said what she did. After a certain point, eventually, Yukari would grow tired of chasing a fantasy. For how did Takasaki return Yukari’s affections besides occasionally worrying about him and making out? She didn’t take an interest in Yukari’s weird hobbies, like Ririna did with the burial mounds. Takasaki, unlike Ririna, didn’t search for a way so that they could be together. And I think, after a certain point, if this show was 20+ episodes or multiple seasons, Yukari would come to acknowledge how much work he put in to get only the minimum in return. Leading to him and Ririna being end game. Since she would be someone who would match the time and investment Yukari shows.