How Not To Summon a Demon Lord: Season 1/ Episode 7 “Change of Heart” – Recap/ Review (with Spoilers) 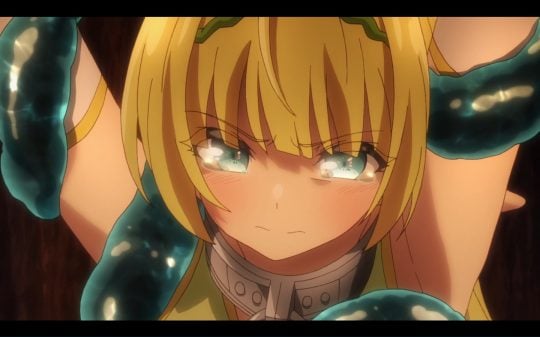 Takuma’s life before Diablo is touched upon as well as why living vicariously through Diablo has become a necessity for him.

That’s right, Takoma, the gamer behind Diablo, is actually focused on. In that time, it is explained to us that before he became a shut-in, likely a NEET, he did pursue friendships and things like that. However, all the two kids do was use Takoma for the items he could give them. Leaving Takoma hurt and, well it would be a bit much to say he was traumatized but you can tell that had a long-term effect on him.

Now, as for whether, after those two, he never pursued or made a friend? Well, being that we barely see Takoma, and it is all Diablo all the time, who knows? But, at least we got a nice reminder Takoma did have a life and his awkwardness isn’t from lack of trying – in good faith at that.

With Sheera seemingly poised to reject Keera, Rem and Alicia are off to let everyone know things are cool. As they do that, Diablo and Sheera just hang out and make potions. Well, Diablo sort of makes potions. Somehow, being distracted by Sheera’s breasts, because you know this show has to do it, allowed him to quickly make one vial after another.

But, Diablo’s gaze aside, since you know he isn’t really going to do anything, it seems he really does have feelings for Sheera. It isn’t clear if they are romantic or not but he definitely feels close to her. Making it so, when she gets entranced by Keera and then says she is leaving with her brother, Diablo is shocked. Triggered even.

For while it was, by no means, like when he found out he was being used by those two kids when he was younger, being left seemingly has a strong effect on him. Making you wonder if it wasn’t just those kids, but maybe his parents who also abandoned him. Because this seems to be an issue bigger than some playmates.

Allow me to digress though, for after Sheera gets dressed, we see her go off with Keera and Diablo sinks into a depression. 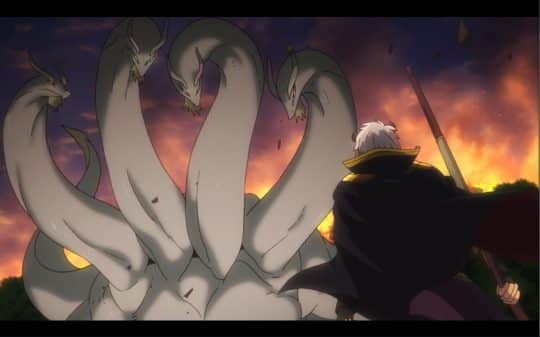 Being that the Diablo persona is just a façade, naturally, it is a bit of a shock whenever Takoma rears his head. So with Rem seeing Diablo willing to wallow in defeat, she decides to plant seeds of doubt in why Sheera would just leave. Of which Diablo has doubts as well, particularly because of the flute Keera played but being that in his game the flute didn’t exist – he is kind of wishy-washy. However, then it clicks in his mind to ask, considering Rem has been abandoned much worse than him, why in the heck is she so pro rescuing Shera? Leading to her explaining what happened the night before and this energizing Diablo a bit. Add in Alicia, who I swear probably is just sticking around to keep an eye on Rem, particularly after that spell in the last episode, and they are off!

Leading to, as usual, when bad people get caught, a summon happening. However, being that Keera is royalty, he doesn’t pull out some low-level salamander but a Hydra. Which seems like an odd choice for a forest creature but, point is, Diablo might have a real challenge with this one. Maybe beyond what Edelagard presented in episode 4. Though, who we kidding? Even without his primary weapon, Diablo will likely blow this beast away.

For a good while, I figured Takoma would be an afterthought and he basically was Diablo. Yet, with a nightmare flashing back to his past, and it affecting his future, it does lead me to wonder if this may happen again. You know, in some sort of, “He came to this world to heal the wounds he was inflicted in the real world” kind of way.

Which wouldn’t be terrible. Him learning to trust people again, talk to girls, fall in love, and gain confidence. Making it where Diablo remains an alter-ego but is very much in tune with Takoma in the real world as well.

So, About This Elf Magic

Though Keera is a creep, I must admit I liked that he possessed and knew something Diablo didn’t. With that, it leads you to believe the upper hand Diablo has largely enjoyed won’t be in place for each and every fight and situation. Pushing the idea that, even though it is unlikely this Hydra will be a huge challenge, we may get a little back and forth.

Leading you to wonder if Diablo getting a downgraded weapon may bite him in the behind. That is, assuming he can’t swap his inventory like a video game.