How Not To Summon a Demon Lord: Season 1/ Episode 4 “Point-Blank War Dance” – Recap/ Review (with Spoilers)

With the balance between action and ecchi complete, so comes the end of the introduction and Diablo having his first true, one on one, battle.

Table of Contents show
1 The Battle with Edelgard: Edelgard, Diablo
1.1 Commentary
2 The Massacre At The Inn: Gregore, Rem, Diablo, Emile, Celestine
2.1 Commentary
3 To Fear & Love A Demon Lord: Celestine, Rem, Shera, Sylvie, Diablo
3.1 Commentary
4 Question(s) Left Unanswered
5 Highlights
6 On The Fence
7 Follow Wherever I Look on Twitter, Like us on Facebook and Subscribe to the YouTube Channel.
7.1 Previous Episode’s Recap
7.2 Check Out Other TV Recaps

The Battle with Edelgard: Edelgard, Diablo

Despite Diablo estimated Edelgard to be around level 80, even with her most powerful attack, one which saps HP from her, she doesn’t do a lot of damage. Diablo, on the other hand, using this “White Nova” attack, while he doesn’t kill Edelgard, her army is wiped out alongside the bridge they were standing on. Leaving Edelgard looking as she does below and everyone quite shocked. 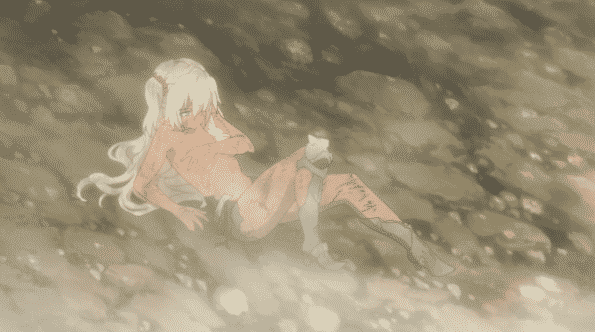 One of the things I hope gets developed is the hatred of humans and why the Fallen, like Edelgard, want the demon lord to return. Is it simply for a shift in power dynamics or, as seen through Galluk, humanity is a major oppressor so this uprising is just? Also, while we saw most Fallen look like Gregore, there is the question of why there is someone like Edelgard leading them? Could Fallen just be a term for the excommunicated? Those who didn’t fit in or were born to a low caste? Hopefully more history and culture is introduced soon.

The Massacre At The Inn: Gregore, Rem, Diablo, Emile, Celestine

After Gregore breaking out of Galluk’s shell, he pretty much massacres all who stand between him and Celestine. However, Emile, for a little bit, is able to hold him off. Just long enough for Diablo to arrive and suck Gregore into some dark dimension with a spell.

Between this fight and the one Diablo has with Edelgard, I must admit I’m surprised how he can be so overpowered yet present entertaining fights. Maybe it is because he isn’t repeating the same spells or the dialog keeps things rather interesting. Heck, it could be the damage he causes. I can’t put my finger on it but I will admit that it makes How Not To Summon a Demon Lord appear that it could handle life without fan service.

Though, because I enjoy the show, I’m trying to see the comedy of fan service so it doesn’t become a blight on everything else.

Celestine still has some reservations about Diablo, but with him doing so much to protect the city, she is coming around. However, in protecting the city, and in extension Rem, it kind of flares up Shera’s jealousy a bit. If only because the collar thing and her belonging to Diablo becomes an issue. That is, alongside, after using so much MP, Diablo becoming delirious and there being a chibi thing of him landing in between Shera’s breast but instead landing on Rem’s and ended up knocked out.

Leading to a 10-day jump in which it isn’t clear if Diablo was out of it for most of that time or simply just resting. What is known though is Sylvie needs him to stop a pending war with the Shera’s home kingdom for they demand her return. Which Shera may or may not have known about when she mounted Diablo in the kind of outfit Sylvie wears.

With the introduction done, in terms of who Diablo is, how powerful, and basic information about Rem, Shera, and Celestine to a point, it has to make you wonder what is next? With Diablo showing he does have teleporting abilities, will we skip over the journey required to get to Shera’s homeland or will there be filler taking us there? If not, instead of filler, will we get to learn more about this world and maybe even encounter Edelgard again?

At this point, I’m locked in for the long haul and do have positive expectations. Let’s see, for us all, whether this show can maintain its momentum or will it soon crash and disappoint.