How Not To Summon a Demon Lord: Season 1/ Episode 3 “Fallen Assault” – Recap/ Review (with Spoilers) A drastic reduction in ecchi leads to us learning about the Fallen and meeting someone who can match Diablo’s powers.

After the debacle which was the first assignment from Sylvie, naturally, yet another simple task from the Mage Association, Celestine specifically, raises an eyebrow. Especially since they are just delivering bread and wine for a large sum of money. So, with that in mind, Rem passes and decides to just do some shopping. Meanwhile, Shera and Diablo head off to the Bridge of Ulug and on the way Diablo deals with Shera wanting to go swimming. Thus delivering the only real ecchi moment of the episode.

But, while delivering the bread and wine it is learned that Fallen, demon beasts who usually are bosses, have congregated in masse, to around 100, and are on their way. Assumingly to release their lord from Rem. 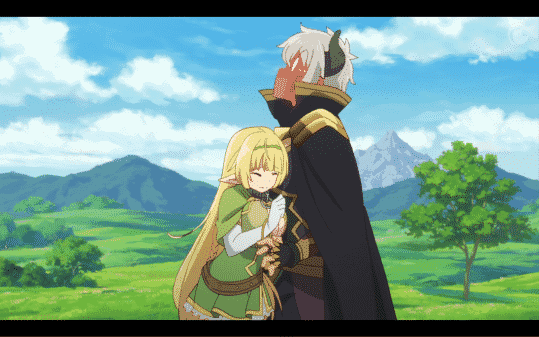 I think there is a serious need to question if Celestine setup Diablo knowing the power he wields. For, from what it seems, Celestine isn’t someone who probably gets their hands dirty anymore. Assumingly, like most guild masters, that is what she has underlings for and while she could risk her life and people, it would be better to just send Diablo.

Though, with thinking that, so comes the question that remains unanswered: Are these characters following a script or not? Based on Diablo’s short fight with Emile, it seems a lot of the characters still fight and perform like they were programmed. Including expecting you to wait for them to finish a spell. So does that mean everything is set in stone and Diablo is just reacting to the script or some things are still open to chance? Like when he thought Emile would use a certain move but then he did another.

Being that Galluk used the name of his guild without permission, for dastardly deeds, he got kicked out. That’s one thing Celestine wanted to tell Rem. The other is Celestine wanted to present the idea, worry rather, than maybe Diablo is a Fallen. For while, as seen in the episode, the majority of Fallen are run of the mill anthropomorphic monsters, there are some which look like Shera apparently. So who knows?

But, during that conversation, the main focus becomes the Great Gregore who, seemingly, has been masquerading as Galluk for quite some time. However, with Galluk having served his purpose, now he decides it is time to attack!

What if Celestine is trying to set up Diablo to get killed for real or is trying to make it where Rem is solely reliant on her? Just the way she appears makes Celestine appear very fishy. You know what I mean. Calm, cool, collected, yet one sinister smile from letting us know she is up to no good.

With that said, how many other humans we’ve met maybe Fallen in hiding, or was it the dagger transferred Gregore’s soul into Galluk? Either way, you gotta love how interesting this show can get when it doesn’t want to just focus on skimpy outfits and breasts.

With over 100 Fallen on their way, and Diablo knowing damn well none of these humans can really hold them off, he decides to take them on – all by himself. For while Shera has some powers, she seems way too frightened, and unwilling, to fight side by side with Diablo. So, after taking out about 30 of them, he faces Edelgard – their commander. Someone who may actually be a real challenge to Diablo and with her giant lance, we may just get an epic battle.

This episode really pushes the idea that there is some kind of end game here. It isn’t just about Diablo having weird relations with Shera and Rem. The end goal is him figuring out how to separate Rem from that demon and kill them. All the while, protecting Rem from Fallen who seemingly want to release their lord.

But, with episodes like this, it makes you wonder what was going on in the creation of this show. Was this episode, which seems to nearly cut most of the ecchi, about balancing things? After making this seem like soft-core hentai, was the idea to make this more story and action driven and then work towards a balance? For this potentially could present the best of both worlds. It can have that hook of Shera’s Dead or Alive breast physics mixed with an actually compelling story. If not, being more realistic, one which is interesting enough to keep you watching.

Only time will tell though.