We explore why Remi likes Sengoku, Miyamura’s attempt to be more aggressive and watch as Yuki learns someone has a crush on her.

He Was Different From The Others – Remi, Sakura, Sengoku

So, considering who Sengoku is, as told to us by Kyoko’s relationship with him, you may wonder why Remi likes him? Well, the answer was given to us in the last episode partly. You see, Sengoku is different. First off, he didn’t disrespect or put down Sakura, her best friend, which started things on a good note. Also, when he got her a gift, after learning she likes to read, which is what started their friendship, he brings both something for her and Sakura.

With doing that, and learning he has a library in his home? Oh, she is in love. Add in him being a little shy and confessing that, if the world was about to end, he’d say he likes her, it was all over from there. Now, she loves him as a whole. Be it when he is being fawned over or when anxious about all the attention. Heck, even him being scared of bugs yet stepping up when she is paralyzed with fear herself, she loves him for that, and that is what keeps the relationship going. 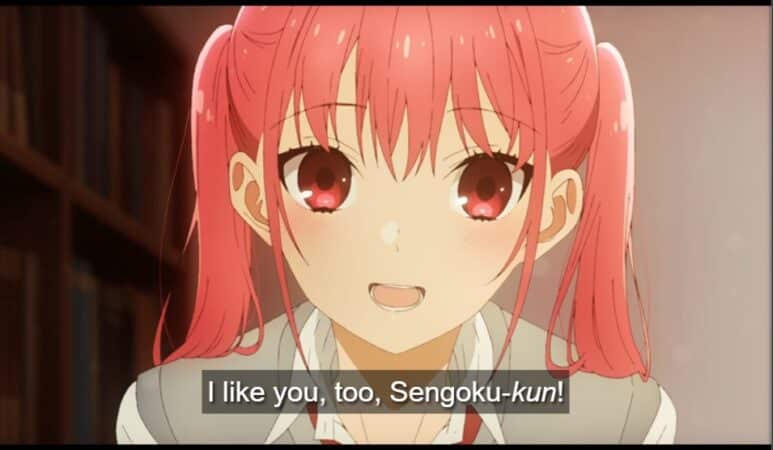 Now, as for how all she says plays into Remi talking about dating Miyamura a few episodes ago? I don’t know. Something seems off in the timeline.

Miyamura and Kyoko are still trying to figure out how their relationship can evolve considering Kyoko doesn’t want to be dominant, and Miyamura is a bit submissive. So, he tries to flip the script, but while comfortable doing this with his guy friends, there is something sacred about Kyoko seeing a different side to him. So trying to be that guy with her is difficult, and eventually, he realizes he just can’t keep it up.

He’s Nice But Not The One That I Want – Toru, Yuki, Yanagi

A classmate named Yanagi asks Yuki out, and despite him being gorgeous, she says no. Why? Well, Toru is her crush, and there is just something about him stepping in to help her reject this guy while pretending to be her boyfriend, that just does it for her. And while it’s only pretend, it’s heaven for her.

Learning There Is More To Remi Than It Appears

When it comes to Remi, especially when it comes to Kyoko’s circle of friends, you’d think Remi was an airhead who took advantage of Kyoko and was childish. However, this episode helped shift perspectives since it is noted she likes to read, specifically fairy tales, and she, like Sengoku, are voracious readers. And with that, their bond seems less to be about the little power he has as student council president and more about who he is as a person. The man he evolved into beyond Kyoko’s perception and experience with him.

A Taste of Yuki x Toru

With nearly every character introduced having a relationship, so comes the question of who will Toru end up with? Will it be Yuki or Sakura, and for the girl he doesn’t choose, will Yanagi step in? It is still too soon to tell, but we did get a taste of what Yuki and Toru would be. Which, when compared to him and Sakura, honestly, it is hard to choose between the two to ship. More so because you want both Yuki and Sakura happy than Toru, but still. Either pair would be awesome, don’t you think?

Learning There Is More To Remi Than It Appears - 84%

As established relationships continue to develop, so comes the question of who is next to start dating, and with each relationship unique, will we see another with a cute dynamic?