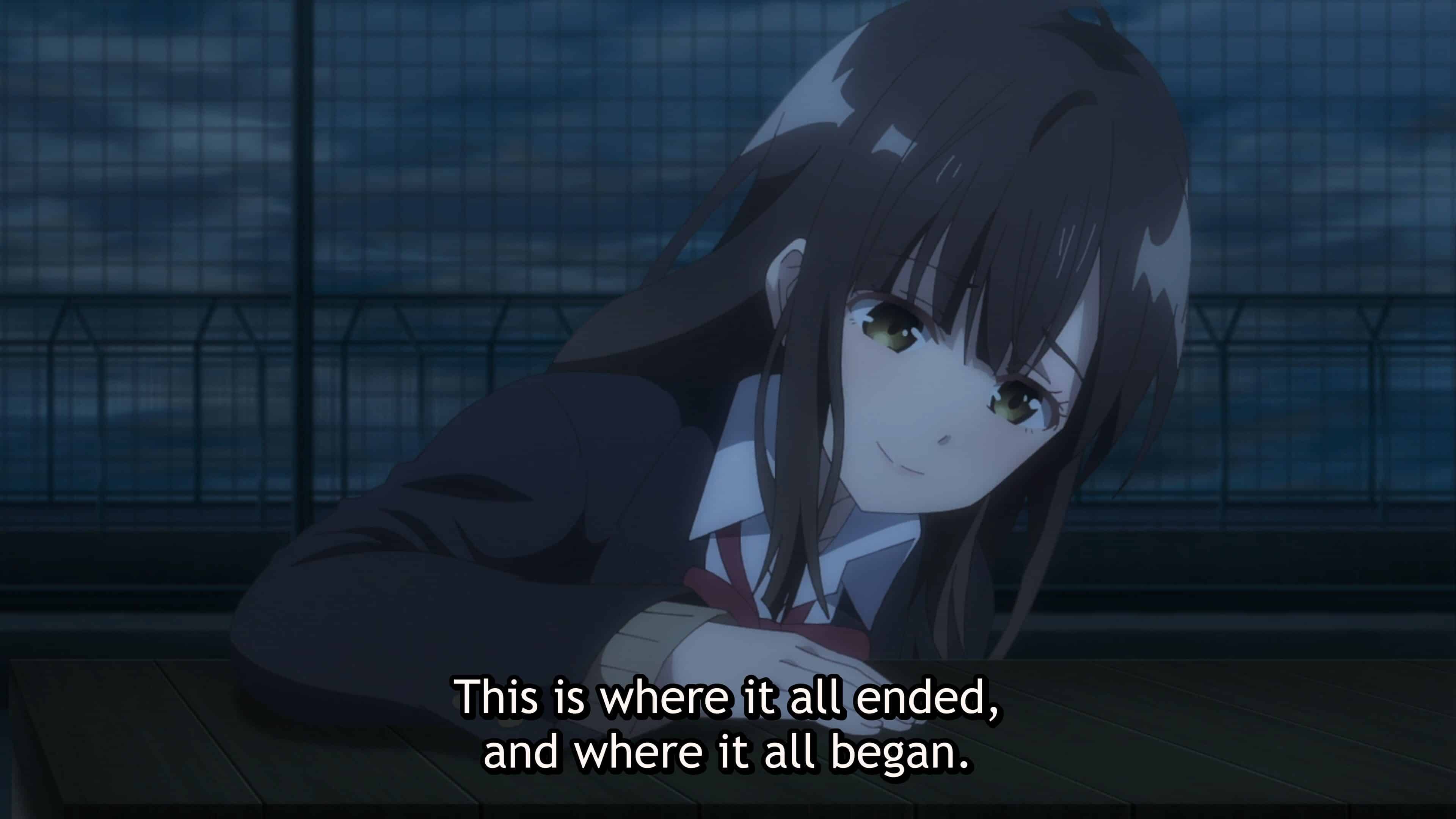 Sayu rubbing the bench where she saw Yuuko last

On her way home with her brother and Yoshida, Sayu decides to face the place where her life changed irrevocably before facing her mom.

The Calm Before The First Waves Hit – Issa, Yoshida, Sayu

Upon arrival to Asahikawa, or a nearby town, Issa has business to attend to in Sapporo, leaving Yoshida and Sayu alone to entertain themselves. During this time, Sayu notes how sordid her life was by telling Yoshida she had to come straight home after school and couldn’t go out on weekends. So them going to a café, like her getting to go on a plane, was a first since her family didn’t go out much and seemingly when it came to her, trips, vacations, any real socialization, wasn’t allowed during her free time.

After spending time at the café, Issa picks them up, and before going home, Sayu decides she wants to go to her high school. Joined by Yoshida, she heads up to the roof and faces what happened to Yuuko nearly 6 months ago. But, with Yoshida there, Sayu isn’t allowed to absorb the guilt and pain of what happened fully as she is reminded it was the bullies who pushed Yuuka to suicide and that Sayu was a good friend. All of this that Sayu needed to hear from her mother and possibly wasn’t said by her brother helps Sayu begin the healing process after distracting herself from what happened.

For the most part, it was a good day. Yoshida lived up to his commitment to help Sayu transition back home, and Issa didn’t interfere or press judgment. He just got them to where they needed to go.

However, almost as soon as Sayu’s mom learned her daughter was home, she smacked the s*** out of her. Thus setting a tone that Yoshida is going to have an uphill battle if he wants to be comfortable leaving Sayu with these people.

It’s About To Get Real

*In Vanessa Williams imitation* Saving the best for last – because that’s what Higehiro is doing. It put most of the good stuff on the back end, and now we’re having Sayu, and her mom meet face to face, and upon first meeting, she smacks the mess out of Sayu? All I can say is: IT’S ABOUT TO GO DOWN!

Mind you, likely things will be split between getting Sayu’s side and her mom’s, with a possible reconciliation in the finale. However, it could also go very left, and Sayu could end up leaving with Yoshida? It’s hard to say since the smack wasn’t expected, and it seems Issa doesn’t do much when it comes to calming his mother down or acting as a mediator.

Granted, he got Sayu out and has been covering for her, to an extent, but there is the need to wonder could he have done more or is he already working at his capacity for this situation? 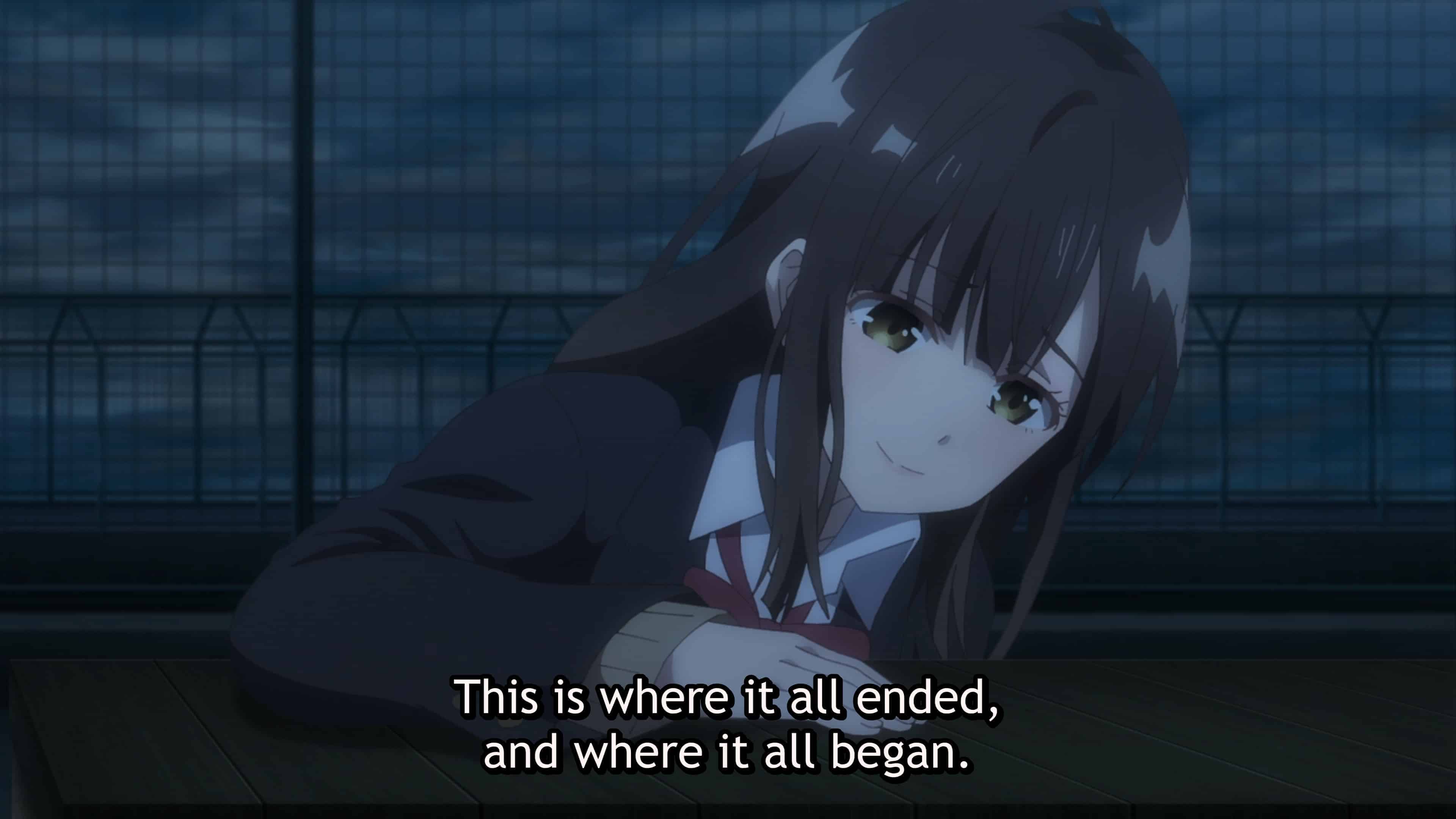 Higehiro: Season 1/ Episode 11 – Recap/ Review (with Spoilers)
Trajectory: Climbing
We're getting to the heart of the story after almost feeling like, in the pursuit of giving Sayu normalcy, we damn near got filler. But, as she faces her demons, Higehiro gets to the point and Sayu's mom delivering a slap makes it clear this won't be an easy conversation.
Highlights
It's About To Get Real
Low Points/ On The Fence
81
Follow Wherever I Look on Twitter and Instagram, Like us on Facebook, and Subscribe to the YouTube Channel.