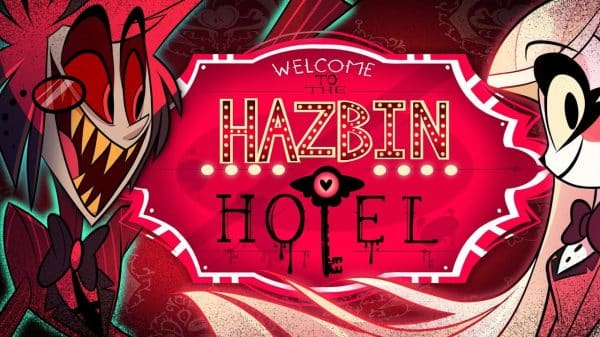 Welcome to Hell! A place where the princess, rather than prep for her eventual reign, is trying to encourage the incorrigible so that they could ascend towards heaven.

But, there is a litany of problems. For beyond the lack of potential clientele, there is the issue that the latest extermination, since hell is overpopulated, just happened. Meaning, people are fighting for new turf or defending their turf, and many are dying in the process.

However, with one of the most powerful demons in hell, Alistair, wanting to assist, more so for his entertainment than believing in Charlie’s mission, maybe something could be done.

There is something familiar about the art that brings on a sense of nostalgia. Maybe it is because I grew up in the 90s, and between Don Bluth, Tim Burton, or Disney productions, something feels very familiar here. But, nostalgia aside, one of the things you have to love is how they play with the concept of animation being made for kids, and yet this clearly being made for adults.

For whether you talk about the violence or the kind of faces which would haunt a child’s dreams, it is hard not to be delighted by what you see. Even in terms of the lighter stuff like when Charlie is doing a manic music number.

Will you fall out of your chair laughing? No. Hazbin Hotel isn’t that type of comedy. Instead, it handles comedy by working against perceptions. As noted in praise of the art style, if someone wasn’t careful, they could think this was some weird cartoon-like Courage The Cowardly Dog or The Grim Adventures. This makes Angel talking about having gay sex, the violence we see, and the back and forth between characters comical, for it is unexpected.

Which does lead to the question of what will happen when the slight shock wears off, but that is a problem to kick down the road.

Not to fill this whole review with comparisons, but the musical numbers definitely seem like they are from a Disney musical. Charlie’s first song, which deals with chasing rainbows, will make you think of The Little Mermaid. Then, when Alistair gets his chance to sing, it’ll trigger memories of the villain from The Princess & The Frog singing.

Ultimately pushing the idea this is a dark tale for those who grew up and loved the animation output of the 90s but want something less kid-friendly.

The Visuals Are A Tad More Interesting Than The Story

The world of Hazbin Hotel is insane, in all the best ways. We have a turf war that so far has three individuals, with many more likely to be introduced, and we also have what Charlie is trying to do with her hotel, alongside the many who think she is an idiot wasting her time. All of which gives us these crazy battle scenes and demonic faces which will tickle you to the point of torture.

However, there is the slight issue of the story to come maybe not matching the appeal of the comedy and visuals. Why? Well, similar to most things rooted in horror, or the macabre, the spectacle of what is going on seems a bit more important than anything else. This isn’t to say you may not be drawn to Charlie or her friend Maggie, who seems to have a crush on Charlie. That you won’t grow to hope Angel, as we learn more about them, may seek redemption. Or, when it comes to Alistair, they don’t allow us to peer behind the curtain a bit, with respect to a lot of the fun being how he comes off a bit enigmatic.

But do I think, off the bat, you are drawn to that? It is highly dependent on your taste. Since the pilot acts more as a big and shiny billboard than anything else.

Perhaps the sole issue that may come with Hazbin Hotel is whether it can be more than flashy songs and visuals. Well, and whether the comedy of vulgarity and innuendo gets old. But, with there being a niche for nearly everything and not too many notable cartoons of this style, I’m sure this will scratch the itch for many.

Hence the positive label. While certainly weird, there is a labor of love here that shows. Leading to the experience of something a little less Disney and more towards an R-rated Tim Burton, but with an original style. Particularly when it comes to sexual content and violence. So check out the pilot above and head over to the creator’s Patreon page to support future episodes. After all, animation ain’t cheap.

The Visuals Are A Tad More Interesting Than The Story - 75%