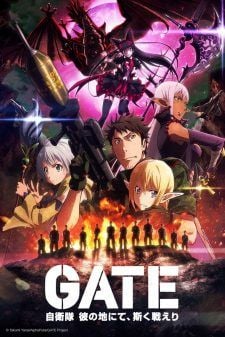 Gate: Jieitai Kanochi nite, Kaku Tatakaeri, or simply Gate, slowly turns from something which seems like a silly ecchi filled anime to something which really holds clout in terms of presenting fantasy, action, and character development.

Episode 1: The Self Defense Force Goes to Another World

Topic 1: A Job To Support My Hobby – Itami

Itami Youji is a 33-year-old otaku who works within the military. From what it seems he has hardly any ambition, besides collecting more doujinshi, and as for why he even joined the military as a job? Well, no information is provided.

Topic 2: The Gate Appears and An Army Storms Through – Itami

What pushes Itami from being a nobody, or simply another soldier, to becoming a nationally known hero, is the appearance of what is simply referred to as the gate. A giant, almost Greco-Roman piece of architecture, which appears without any visible scientific reason. Though it isn’t so much the gate as the army of demons, soldiers, and dragons which come forth. Leading to a lot of dead Japanese citizens, but the show decides not to be too graphic with anyone’s death, leading to a possible missed opportunity.

Still, with Itami helping to save people, and organize an effort to keep unharmed citizens safe, he is rewarded with a promotion that makes him a 2nd lieutenant. Though, alongside his promotion comes fame and him meeting a young man, who is also an otaku, named Kurata. Someone who seemingly is a bit new to the military, but very much inspired by Itami’s bravery.

Topic 3: Off Into the Unknown – Itami

After the surprise attack, between Prime Minister Houjou, his successor Prime Minister Motoi, and the US president Dirrell, the gate was placed under guard, and now shall be invaded by a large army force. Of which, naturally, Itami and Kurata are a part of. And the episode ends with Commander Hazama watching the forces go in, and we seeing a vibrant medieval world which just got invaded by people with tanks, guns, and the type of armor which will make it so the only way Itami and co. may die is if they run out of bullets.