Cop Craft pushes you further into the cultural, soon to be physical, conflict between humanity and the Semanians. Presenting an engrossing cop drama.

From Sharing A Case To Sharing Living Space: Kei, Tilarna

With Tilarna killing a suspect, and speaking what comes off like mumbo jumbo to Kei about Mildey, Latena, and magic to control the dead, he accuses her of being sent to get in the way. Said comment leads to a standoff with Tilarna holding her sword to Kei’s neck and him holding a gun to her face. Which makes it clear the two of them need a break from each other after a long day.

However, due to Tilarna refusing to hand over her sword to the concierge, Kei is intrinsically guilted into having him stay with her. An act that leads to them growing slightly closer. At least with Tilarna seeing Kei maybe as a person not as gruff as he wants to appear.

While the introduction of the term Mildey, which means magic, and Latena, a type of spell, may go over your head as much as it does Kei’s, at first, then we meet Elbaji, Zelada, and Kareem. Who are these people? Well, Kareem is a human terrorist, Elbaji a Semanian, and Zelada, an elder. Taking things further, Elbaji is a Semanian who has made himself quite the easy, possibly enviable, life in the human world and also happens to have a concoction known as fairy dust.

Leading to the question of what is Fairy Dust? Well, the way it seems, it might be ground up fairies, or something of fairies, which when consumed by humans, allows elders like Zelada to control them like zombies. Which is what Kareem wants to purchase. What he wasn’t expecting though is it being so powerful that it could get someone to kill themselves or that Elbaji is working on a fairy dust bomb that could have the size of a nuclear weapon.

We All Have A Stake In This: Kei, Tilarna, Cecil

Which, the following morning, is discovered by Kei and Tilarna. Not the bomb but the results of it and Elbaji playing fast and loose with human lives. And with that in mind, it is worth noting that Cecil, the local coroner, Kei’s ex, has discovered both his partner’s killed and the person who Tilarna killed were dead before they were killed. She discovers this by the acid buildup in both bodies. Leading to Tilarna revealing to Kei the whole Fairy Dust thing not only being a problem in her world but also something the Marzaney Sect deals in since their Mildey, magic, seems to be cultivated in the dark arts of necromancy.

Thus making this case even more important to both for not only vengeance, but also prevention. However, as before, problems arise when Tilarna is forced to deal with human procedure instead of getting right to the action. Leading to us believing she abandoned her sword to possibly seek out a lead given to Kei, that would point them towards Elbaji, alone.

A Balance Between Investing In The World & Characters

When it comes to most programs, there is a vibe that one or the other gets sacrifices: Either you get a full backstory on many characters, and feel like you are allowed to build an emotional connection, or they are simply your medium to a large world. One whose culture, history, and future, are made to make the hero seem small and but a single chess piece in a much larger game.

Somehow, Cop Craft balances the two. For as we learn about magic, Fairy Dust, and the different sects of Semanian, the world grows deeper, and we are pushed to develop more questions. Yet, our heroes aren’t left behind. Beyond Tilarna’s age, we see her ignorance, how childlike she is, yet also how violent she can be when either she, or her ego, get threatened. Same goes with Kei. Between the introduction of Cecil as his ex, or him talking about his cat Kuroi, we begin to see past both of their facades and get a sense of who they are outside of their jobs. Leading you to connect and want to invest. 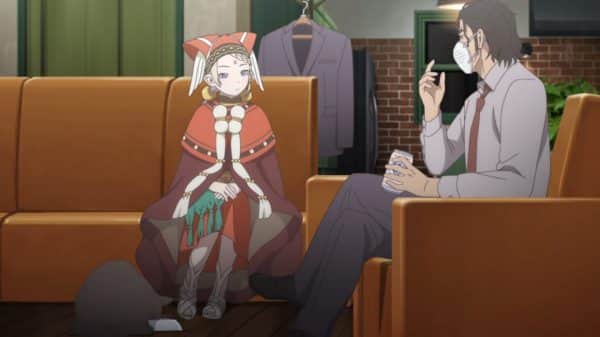 While The Information Remains A Bit Overwhelming, We’re Catching On

Being that a lot of the terms used are not quickly translated into the language you speak, it does remain a smidge difficult to know what is going on. However, with Kei now being as clueless as the viewer, things get explained, and you’re allowed to catch up and catch on. Making things a bit more easier than the pilot which almost made it seem you’d have to read the source material to know what was going on and, if you didn’t, you’d be SOL.

It Seems Made To Be Binged

With the way this show ends on cliffhangers, it pushes you more, than any show I know of, to want to continue. Mind you, not in a cheap way, but almost like it is one long 5 to 6 hour anime cut up into half-hour limited episodes. And considering how popular binging is, it’s hard not to feel this was made to be consumed that way vs. watching week by week.

A Balance Between Investing In The World & Characters - 85%

While The Information Remains A Bit Overwhelming, We’re Catching On - 84%