Caligula: Season 1/ Episode 1 “When You Lose Your Composure, You Cannot Reach The Truth Or Reality” [Series Premiere] – Recap/ Review (with Spoilers)

Most of Caligula’s premiere is dedicated to its lead talking like the most boring lecturer you’ll ever meet, and it is hard to say if the end of the premiere makes up for that.

Shikishima is a psychology buff and between talking about the Johari Window and examining his friends’ behavior, he shows his knowledge of psychological jargon well. However, one thing he can’t explain is why, one day, people go crazy and start fighting this guy named Satake Shogo. That or why, on graduation day, many people morph and then start attacking those who didn’t. But, maybe it is because he heard virtual idol μ call for help? You know the really boring teacher you had between middle school and college? The one who was excited about what he was teaching, but solely showed it by how much they knew but not how they conveyed it? That is Shikishima. As he goes into various aspects of psychology, name-dropping Freud, amongst others, while you have to admire his interest, depending on your interests, he may also bore you into a nap.

And it doesn’t help his friends don’t seem all that noteworthy either. They just fill out the show and don’t really present much in the premiere episode. Heck, even when things go to hell, you’re not necessarily worrying about what’s his or her name. You may barely even care about Shikishima.

While it is understood μ is a musical idol, how and why she is being used to seemingly morph people into monsters? Well, it is one of those things you, unfortunately, have to stick around to find out.

The problem is, while the episode picks up towards the end, does that mean the boring part is over or maybe Shikishima will use his love of psychology to help develop his peers? I’m trying my best to be optimistic but this premiere really did bore me into a nap so it is hard. 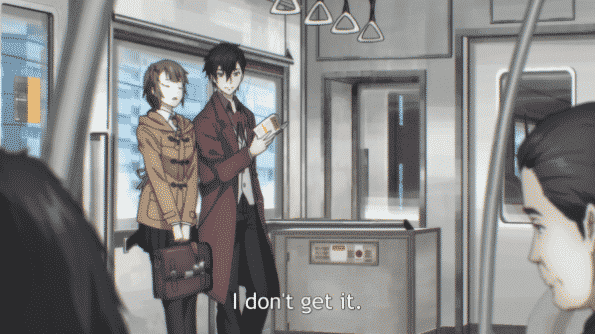 I want to be nice and mark this as mixed, but that would require having the belief this could get better. In my mind, this might only get worse and if I’m wrong I’m wrong. However, I do feel that the new two episodes will ultimately say whether this show is worth it or not. But for those like me who need to be hooked on something from the beginning, unless you’re willing to experience the struggle, I can’t necessarily recommend this.

I tried to watch Dances with the Dragons… and after a few minutes, I knew it wasn’t for me. I’m starting to think I only like the summer and fall season premieres.