To show how phone addiction affects a family, across generations, we see the effect a new phone has on Nick and Diane. For Nick, after having a phone slowly dying due to updates, having something fast, new, able to do it all, makes him forget anyone and everyone but Cellsea. Then, when it comes to Diane, her addiction is Boggle.

How bad is it? Well, she turns into Gollum when Elliot tries to talk her away from her phone. At least until he breaks through and, of course, they make sweet and passionate love. 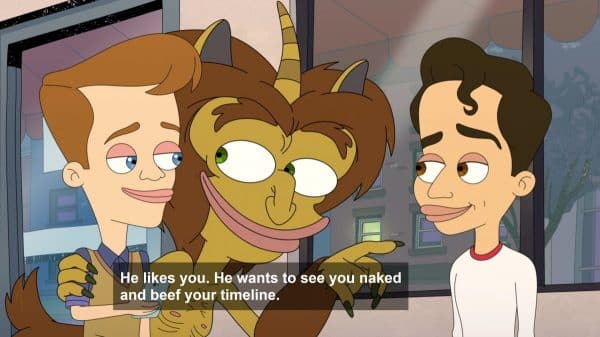 Maury: He likes you. He wants to see you naked and beef your timeline.

Andrew decides to go off the grid because Fart Boy is becoming an outlet that doesn’t serve him. But, with setting aside technology, he learns how alone he really is and how his friends are too caught up in other things to share his discovery of nature. So he goes back within a few days.

But the big to-do of the episode is how much we see of Matthew. Beyond his school gossip show, or one-liners, we see Matthew’s family, his room, and even watch him stumble in trying to romance Aiden. Heck, he even gets some time with Maury, who seems sexually open but inexperienced with counseling gay teens. Which makes Jessi bestowing what advice she can a saving grace.

It may have even gotten Matthew a boyfriend.

So Many Choices: Jay

Representation is important. Why? Because Jay is closeted and while Matthew exists, he seems to operate on the idea you are either gay, straight, or slowly creeping out the closet. So he is of no help. Making Geordie’s Journey, a Canadian show, that somehow Jay has access to (Is Big Mouth not in the US?), a godsend. Mostly due to it having a lead who, in his adult years, is discovering his sexuality and maybe even gender expression.

But it is later on, when Jay speaks to Duke Ellington, Freddy Mercury, Prince, David Bowie, and more, that he gets to hone in on what he is: A bisexual, cisgender, polyamorous person!

Sexuality & Gender Expression Is A Spectrum

That whole musical number going through nearly every sexual orientation (though I’m sure some were missing) was eye-opening. Also, add in gender expression, minus trans strangely, and while it was a lot to consume at once, you had to appreciate the presentation. For despite this being MA, like Thirteen Reasons Why, even though the rating says, “This Is Not For Kids!” you know they are going to watch it. Making the exposure of terms they can identify with helpful in their journey of self-discovery. 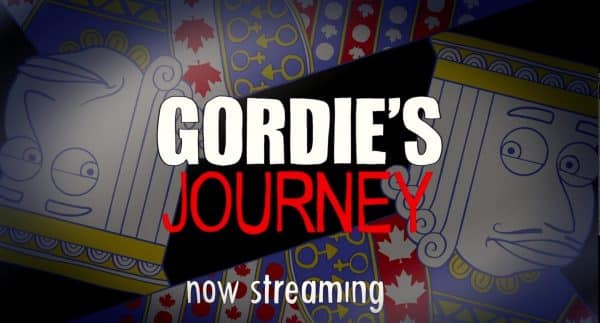 As noted by Maury, when Matthew is giving up hope on Aiden, they live in a small suburban town which, let’s face it, isn’t that diverse. It has a few sprinkles of minorities here and there, but is white and cis dominate. So for Jay, it isn’t like he’d find an older Brown person who he could speak to about his feelings. Also, while there is Matthew, being that Jay doesn’t see himself as gay, that wouldn’t help.

Hence why characters like Gideon are important since, even if they don’t look like Jay, he can get the heart of their journey and identify. Also, as most generations preceding should hope, with Gideon, he didn’t have the courage to explore until he was older, married, and unfortunately had to hurt people. With Jay taking on this journey so young, and strangely not tortured by the Shame Wizard, he won’t have to go through that.

It’s like Tyler Perry owning his own studio in Atlanta, Billy Porter being out, proud, and one step closer to becoming an EGOT, or Lena Waithe being one of the most recognizable, and out, Black lesbians in America, that representation matters. Be it coming from nothing and becoming a mogul, like Perry, or in the case of Porter and Waithe, seeing someone who lives authentically and isn’t punished professionally for it. Oh, and also has love in their life and seems happy.

Matthew: Beyond The Sassy One-Liners

Let’s count it, we see Matthew’s family, learn the names of his parents, get to understand the dynamic he has with them, see his room, and also see him spend time with Maury and Aiden. That’s a lot for a character who, formerly, was barely featured. And while this does seem like a lot of catch up, with us focusing on toxic masculinity, and the development of girls, Matthew, and Jay repping for the GB community, with Jessi’s mom representing for the Ls, is a big deal.

Leading you to wonder, will the T remain silent, or will a trans character be introduced? 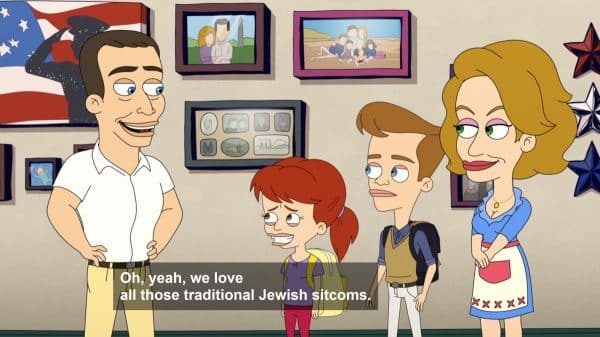 Edward: Oh, yeah, we love all those traditional Jewish sitcoms.

Maury Telling Matthew To Kill Himself

While fully aware it is a joke, I must admit there was a part of me uncomfortable with Maury presenting that idea to Matthew considering his situation. Specifically, his dad denying he’s gay, and mom may be going along with it, the loneliness we saw Matthew dealing with last season, then when you add in the only gay kid he knows, that’s out, maybe not being interested? Granted, Matthew isn’t being bullied, but you can imagine if he was more vulnerable that he could be tempted to attempt suicide under the idea that he will never be loved, accepted, and/or happy.

Maury Telling Matthew To Kill Himself - 70%

Matthew: Beyond The Sassy One-Liners - 85%

Sexuality & Gender Expression Is A Spectrum - 87%