There doesn’t seem to really be a happy relationship around. Be it between kids and parents or lovers. But, at least people have their ghosts, friends, and their friend’s mom.

Table of Contents hide
Dear Mama: Jay, Nick, Diane
Too Much Too Soon: Andrew, Missy
I Know What You Did With The Cantor: Jessi, Shannon, Greg, Jay
Highlights
Criticism
On The Fence

A consistent theme, as Jessi preps for her Bat Mitzvah, is the kids getting older. For Nick specifically, he catches a bit of an attitude for not getting in trouble like his older siblings for the party. So, with that, even without a hormone monster to coerce him, he starts pushing his mom away. Something which breaks her heart a little for while she has her husband and other kids, Nick is her last foreseeable baby.

Which gives Jay the in he needs to try to take Nick’s spot. After all, hugs, love, home cooked food? That doesn’t exist in Jay’s house and this kid is giving it up? Make way Nick, Jay is about to be your new brother but with the same mother. [note]We get to see Jay’s father and one of his commercials this episode.[/note]

Too Much Too Soon: Andrew, Missy 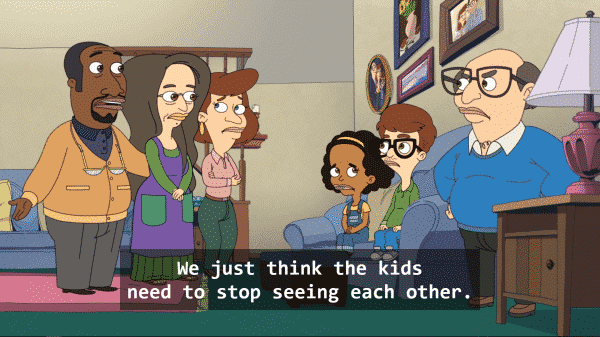 While “The Rock of Gibraltar” may have inspired their romance, it isn’t something Missy is perhaps ready to live out. Hence why, even after talking about having a secret relationship, since their parents think Andrew and Missy are too young to date, Missy ends things. For though she likes Andrew, he is talking about marriage and kids and while Missy wants that, it is all too soon and overwhelming. She even compares Andrew to sugar and you know sugar makes Missy become all types of crazy. So, even though it seems even the Hormone Monstress doesn’t support the idea, Missy decides to walk away.

As for whether friendship remains on the table, expect a negotiation later on between the monsters.

I Know What You Did With The Cantor: Jessi, Shannon, Greg, Jay 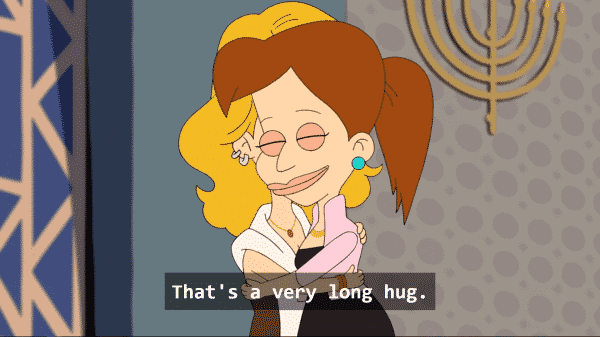 It all comes out. How Shannon is messing around with Cantor Dina, how bad her relationship with Greg has got, and that Jessi knows. All of which puts quite a damper on Jessi’ Bat Mitzvah but then Jay arrives. Though probably weirder than Nick, and maybe even Andrew, Jessi appreciates the effort Jay makes to connect or make her smile. Thus leading to a second make out gift to Party Wolf howl!

Big Mouth, without a doubt, continues a slew of life lessons and advice. Some of it heavy-handed, like this whole mom thing, and others not so much. However, even while heavy-handed, it does remind you to appreciate what you have. For Nick, while he is starting to not like being babied, there are people like Jay who have to find love inside his pillow. Of which abandon him and will have sex with his brother.

For Greg, it isn’t 100% made clear where he ultimately messed up, but it seems there came a point he stopped trying. Thus leading to Shannon seeking out others who perhaps would. I mean, even Andrew’s parents show provide us a lesson in love. That of putting your wife before your desires, especially if they will negatively affect her. 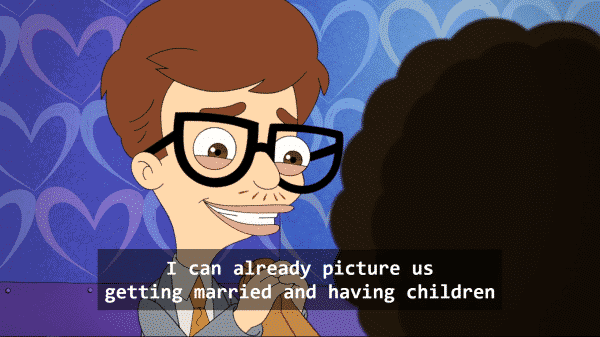 A lot of us grow up watching our parents, friends, and media and think how much we want that ideal and passionate love. That is, before we’re in a relationship. But what makes Missy and Andrew’s breakup so interesting is that they are pretty much on a level playing field. Neither have a home life like Jay’s, for their parents are together and, for the most part, get along. Also, they are both only children in middle-class households. I mention this because it shows how Andrew being able to confess his love isn’t factored by the usual fear of losing Missy. It was just something natural.

Yet, as Missy notes, there is natural sugar. So, again, with an equal playing field, it made her breaking up with Andrew a little bit of a surprise. However, considering how Big Mouth tries to really show girls on equal footing with boys, it shouldn’t be surprising. Missy, as long as she doesn’t have sugar, has shown a maturity beyond nearly all of her friends. She was the first to get in what could be seen as a semi-serious relationship. She was the one reading literary erotica before Jessi and even seemed to be capable of approaching her crush before they dated.

To say the least, Missy is a bit of a bad ass for a 7th-grade girl and you need to put respect on her name. 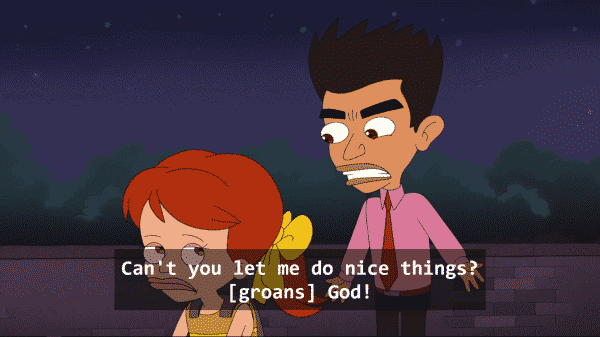 I don’t know why, but I’m slowly getting the vibe that Jessi is rewarding people with make-out sessions. Be it guys being vulnerable or nice to her. Though, considering Jessi is at that age figuring out what she likes and who, perhaps this is only natural. Nick and she have their little in-jokes and get along, so why not try dating? Same goes for Jay. While he is weird and someone she made fun of, he understands what it is like to have dysfunctional parents who cheat on one another. They connect in a way she has no one else to relate to.

So, really thinking about it, Jessi isn’t so much providing kiss rewards as much as exploring what intimacy is. Like in terms of the benchmarks perhaps. As in, where does the line between strictly friends and make out partner lay?

But, on the flip side, she is reinforcing the idea that guys being nice means them getting a reward vs. that just being what humans do.

Though it is established that Jessi is really a daddy’s girl, I would like to see the dads get some flack on this show from their kids. Thus far, the moms have taken quite a beating while the dads get to just play comic relief characters. So here is hoping as Greg deals with his marriage falling apart, maybe Jessi may get to see this, maybe realize why her mom is distancing herself away from her dad and doesn’t take his side by default. Dad’s on this show need to be called out more. 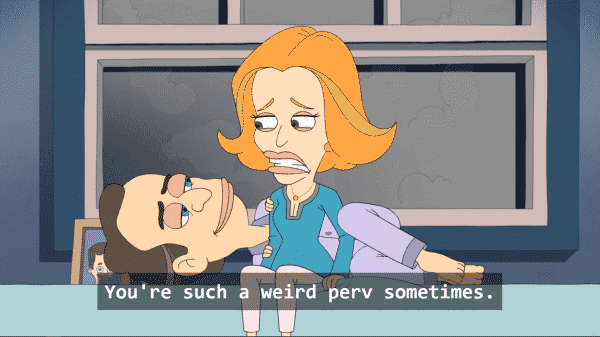 Collected Quotes and .Gifs From The Month Of October 2019