Damn that Hormone Monstress. With the boys having an exclusive sleepover, Jessi is pushed to have her own. One in which the Hormone Monstress wants Jessi to become popular, so she wants her to invite Devin – the girl who is part of the interracial power couple. Problem is, Lola is part of the package and she is possessive as hell over Devin. Then comes Missy. Someone who Jessi invites out of kindness but ends up very mean to.

However, you can kind of understand why. You see, Missy has it worse than Jay since she is a girl. After all, think about it, what other Black girl (well, actually bi-racial) girls do you see on this show? Much less odd ones into Firefly and things of that nature? So getting the chance to be one of the girls? Can you imagine how exciting that is! But then Missy goes against her special diet of having no sugar and repeatedly talks about people doing what she wants, or sucking her d***. Leading to a whole series of insults flying about. The first from Lola and Devin making fun of Missy, then Jessi joining in. This is apologized for but while Missy is being made fun of, so is Lola by Devin. Then, with the attention-getting put off her, Devin makes it about her and how hard it is to be the alpha, pretty, and have nothing but beta friends.

To say the least, the night is very dramatic.

But what makes the night go from weird to sad is realizing that this is what Jay is forced to deal with. Making him often left out of things sad and kind of depressing. Also, it helps you understand why he flips out so often. He basically is at the bottom of the totem pole in his home and with no one supporting his magic pursuit, he relies on the outside world for love and validation. As noted, Jay’s home life seems like hell. Which wasn’t necessarily unexpected, but considering how he is crazy, there was an assumption he is just like the rest of his family. Not in the way we saw but like, them being nuts was just normal to them. However, as he started breaking down and crying, it became clear that while he is acclimated, he doesn’t accept this life his mom and brothers force him to live. He wants normalcy, sleepovers, and he can’t have that because people aren’t going to want to stay and deal with his family. They are beyond quirky and are straight up off-putting.

Something I hope isn’t a one and done kind of topic because I feel like this is perhaps the deepest we have gone with a character yet.

For a better understanding of why callbacks are excellent for TV shows, check out Vox’s use of Broad City to explain callbacks, running gags and Easter eggs. Now, as for why this is a highlight? Well, shows letting you know what was said and done mattering is a big deal. It shows and reminds us we are dealing with people who have lives that may seem like they only go forward, but in fact do contain moments of reflecting and also regrets.

Though, for Big Mouth, it just makes for some additional comedic moments. 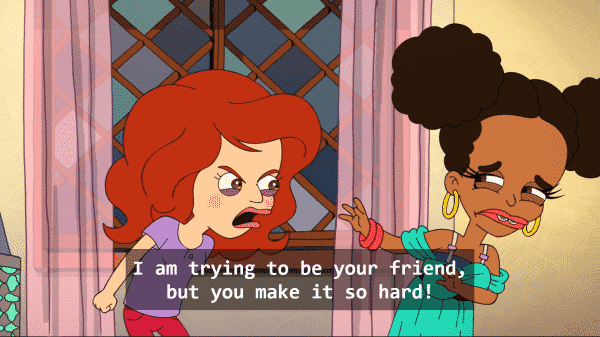 The girl’s sleepover kind of deserved side-eye to me. Granted, not a girl so I perhaps may not understand how an actual sleepover works, but the whole Mean Girls thing is just so old to the point it’s a ding whenever I see it. Especially considering Lola and her issues that Devin takes advantage of. Perhaps making Missy the silver lining. Mostly because, she is weird, nerdy, and no one is like her on this show.

In fact, following the handful of things actually praiseworthy about Neo Yokio, it’s hard to not wanna root for the rare depiction of a Black girl, never mind person, in something animated. Never mind her being of an Issa Rae, Insecure ilk.

Honestly, the disturbing part is how no one helps Jay.. His brothers were going to make his young friends eat speed, this is an illustration of the normalization of sexual abuse.