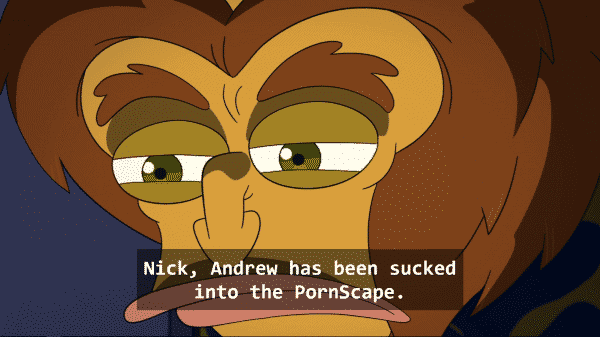 There seems to be a murderer going around killing people that cutting off their ponytails. At one time Coach Steve was a suspect because, well he is Coach Steve. He is weird, knew all the victims thus far, and with him having no real connections to anyone, he was without an alibi. However, with someone who looks like Karl Lagerfeld being murdered and dumped in the synagogue’s dumpster, while Steve is in custody, he gets off.

But then all eyes are on Andrew for his semen is all over the man. You see, to get over Missy, Andrew has been numbing himself through self-love. Which led to a whole trash bag of gym socks being used that he isn’t trying to leave for his mom to clean. Especially since some of them are so hard that the Hormone Monster breaks one like glass. So, he decides to dump them in the synagogue’s dumpster.

Thankfully for him, however, there was video footage so he doesn’t catch the rap. He does though go viral for all that happens before and after the socks enter the dumpster.

I Want To Know What Love Is: Jay, Jessi Jessi is still using Jay for a make-out buddy and it is coming to the point where Jay is catching feelings. This much intimacy is foreign to him and, naturally, he wants to know whether he should consider this something consistent or prepare for Jessi to disappear like Pam. Of which, Jessi reluctantly says yes if only because the Hormone Monstress says to throw him a bone. Well, alongside saying whatever he needs so they can get back to kissing. 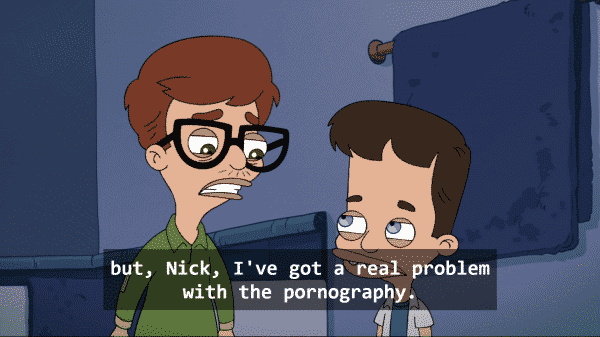 Thus leading them on a great journey filled with penis, big boobs, water play, and more. Until Andrew tries to escape and The Hormone Monster is forced to stay behind and fight all these fantasies off.

Boys Have Feelings Too But the point here is, I liked that we got to see both a guy reacting and doing what they often do in media, find escapism through sex, and us seeing a guy yearn for intimacy, companionship, and something he can consider long-term. It’s different and not necessarily new but I feel rarely seen. Especially because it empowers these girls. Not to forget, it doesn’t damn them for their decisions. Missy isn’t shown as a B with an itch just because she broke up with Andrew and neither he nor Nick paint her that way. Nick acknowledges Andrew’s state is because of Missy but that is about it. He doesn’t yell, scream, and really try to make her feel bad. He just drops facts and moves on.

Then with Jessi, it Is easy to understand why she choose to go along with Jay’s desire and again, you can’t damn her. Right now, Jessi needs Jay as a distraction and him being someone who related to her and understands her situation helps matters. So with him wanting to DTR and seeming very vulnerable about it, I think a part of her wanted him to feel the sense of relief he gives her.