B – The Begininng­ seems like the kind of product that had too many people involved with writing the script and left one person to ultimately salvage what could be used.

For almost a decade, Keith has been investigating the death of his sister Erika. To be exact, it has been almost 7 years. However, solving this puzzle has been immensely difficult. Especially since Keith isn’t much of a team player and while working as a detective, he went rogue and interrogated someone who confessed to her murder – by kidnapping them. Yet, many years after that incident, Keith returns thanks to his colleague Eric. Someone trained by Keith, and who used Keith’s teachings to train the young people of his department – The RIS.

A team which finds itself tasked with handling the recent wave of terrorist incidents which include the assassination of many political figures. Also, an entire, multi-story hotel, being held hostage. Which is revealed to us to be the work of the Market Makers. A terrorist group sponsored by the king that produces enough chaos to force the people to need the government and allow them to maintain their powers over them.

But, as Keith continues investigating the death of his sister, it clashes with a young man named Koku’s investigation to find his childhood friend Yuna. Someone who became a member of the Market Makers, and who Koku has been calling out to by leaving what looks like a B and 4 marks. In actuality though, it is the numbers they were assigned by Dr. Kazama, Keith’s father. And the connection of Dr. Kazama is what slowly but surely leads Keith and Koku, known as Killer B, on a collision course as they come to realize they share a source to their problem. While we do see decapitated heads early on, and many dead bodies, the show doesn’t try to take a route of being overtly sexual or violent to make up for its weak points. This isn’t to say it strays away from letting you know the damage the Market Makers, and Koku, are willing to do, but it doesn’t end up encompassing what the show is about. Violence, and the little bit of sexual content we see, just act as sprinkles to a dry cupcake.

The biggest issue of this show is that it doesn’t present any real value to the lives, in terms of mortality and background, of anyone but Koku and Keith. You are led to believe that, eventually, they may build up those who represent the Market Makers, maybe Keith’s past and current co-workers of the RIS, but this isn’t true at all.

Starting with Lily, she is one of the female women on this show who are seen throughout the season, and her character is nearly as generic in the beginning as she is in the end. This is even with her father and brother being introduced, and Eric pushing the idea she could become the next Keith. Something we see in her word vomit confrontation over one of the crimes and her solving one of his puzzles. Yet, like with many characters on the show, while she is given one or two shining moments, after that you are given no further reason to remain invested. 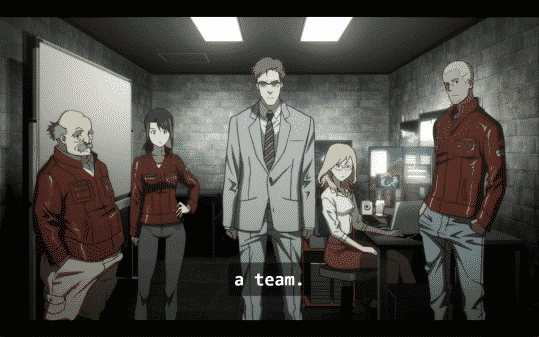 And I would love to bring up the rest of the RIS, from Boris, Eric, Mario, and others, but with them, you don’t even get little tidbits or signs they have a life outside of work. Much less reasons for you to wonder who they are really. Their sole purpose is to aide Keith and it is taken to the point that even for those who knew Keith before his sister Erika died, one of the main catalyst of the show’s events, we don’t even see his relationship with them back in the day. You don’t see Eric in awe of Keith and jotting down notes, which would be used to train members of the RIS, we don’t see Boris as part of the family, forcing Keith to be more social, or anything like that. They are just there to help and when not needed to support Keith’s pursuit of justice, their lives are on pause and they are put into the closet.

Which, believe it or not, is way better than how the villains are handled. When it comes to the Market Makers, specifically Minatsuki’s crew, each and every one of them feel like placeholders. It is recognized they are the villains, since they seek to harm Koku, but with their purpose and drive not being made clear, as we watch one die after another, you lose interest quickly in whatever their end goal is. To the point that when we get a twist of who the real leader of them is, you don’t really care enough to feel shocked. If anything, it seems almost like a last-minute attempt to turn things around. 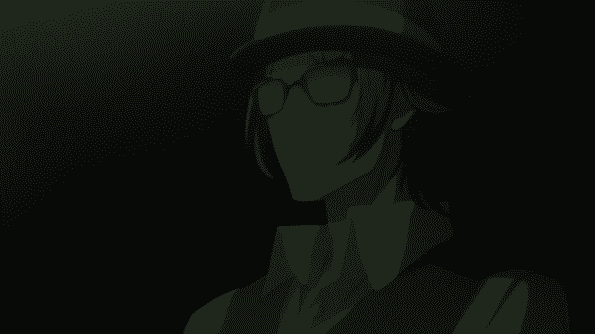 Something that can even be said with the true villain of the show, Gilbert. Him killing Erika, due to rejection, and somehow orchestrating the rebellion that led to Keith’s father, Dr. Kazama, dying is nice to know but lacks true impact. For, again, there is this vibe that the first half of the show was damn near filler which just so happened to include introducing a wide cast of characters.

Yet, not until later on the show decides to get serious and by then, introducing the prophecy and noting Izanami, killed within the first few episodes, seems too little too late. Turning Gilbert from a rarely seen friend of Keith to the show’s villain seems like a change to the original script because someone up the chain thought the original was too boring. Much less, having Laica be the true leader of the Market Makers, in some form, with Minatsuki being this thing called a Reggie, again there is this idea that after many lackluster episodes, there is this last-minute attempt to try to leave you with something that may help you forget the crap you just shifted through.

The Show Fast Forwarding What Happened After The Big Climax, And Then Setting Up Another Twist For A Possible Second Season

Admittedly, Gilbert’s reveal of his true self and past was a bit of a highlight. Yet, considering how ingrained his behavior and murders were into the system, the show skipping over all the blowback from that and giving us peace and tranquility, after 3 months, showed this program doesn’t give a damn about pay off. We wait the entire season for Koku to fight Minatsuki, then Laica, and while the battles had blood, they had no heart. It was just another villain jealous of what the hero had. 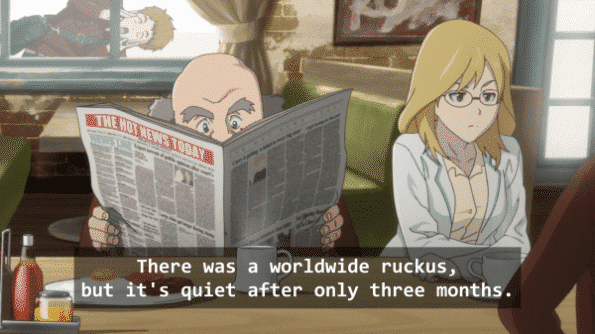 Keith has been working for years to solve his sister’s murder, and when faced with the killer, he is as dead in the face and his emotions as ever. Then, to really add insult to injury, we can’t see the fall of the powers who supported Gilbert and the Market Makers? Not even see Yuna and Koku be whatever they are to each other, after he spent the entire season trying to save her? Yet, you wanna set up a new twist of the kid Koku thought was dead being alive?

I got one question: Do anime production companies do any sort of audience testing or after the time and money spent, they just hope for the best?

There are only really three notable women on this show and the rest are quite forgettable. The first is Lily, who is previously mentioned, and seems like she wandered into this show when really she belongs in some slapstick comedy. The second is Erika, one of the catalysts for everything that happens, who have no lines and is just seen. Then it should be Yuna, who gets one good fight scene in but, otherwise, pretty much is a damsel in distress and while technically Izanami should be notable, by the time you realize she is important, you’re at the point of having to Google her name to remember who the hell they are talking about.

But then there is Kaele, the third noteworthy female character. With her, you see something to invest in. She is really into technology, the only one who lives up to the hype other characters give her, and she also seems a little nuts. Especially in the end where she is excited about Keith coming back for she expects weird and interesting cases to follow. Making her the only woman, perhaps one of the few characters – period, who seems like she wasn’t meant to be a placeholder or a supporting character strictly dedicated to pushing the show along. In the case of Kaela, you can imagine and see her having her own life, passions, and a personality worth taking note of.

The Past Was Often More Interesting Than The Present & Future 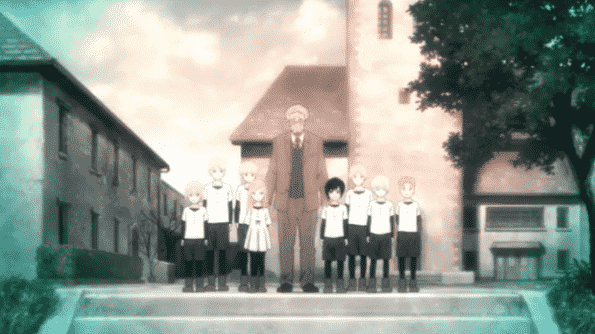 The present and future of the show moved at a pace where it seemed lost and bewildered and then, after going over what happened in the past, and truly trying to give the show a stable direction, sprinted towards the end. This was a problem. For in the past we have everything needed for nearly a complete season. You have this attempt to genetically give rebirth to gods. We have these children whose body parts are weapons which can either become swords or eyes which manipulate memories. There is this prophecy tablet which no one can decipher and this institute, littered with corruption, that ultimately cares more about disposable super-soldiers, released from their care around 20, than the gods who people are donating money to see.

Making it so, until episode 6 or 7, you are watching a show which seems aimless and is heavily relying on the Netflix brand to justify why it is worth watching and finishing. Yet, once these two episodes past, you see the type of layers and blocks that would have made a better show than what we was presented.

Like many Netflix shows, this doesn’t seem like it was created in mind to be binge-watched. It was made to have a good 6 day forgiveness period, maybe give you some time to create theories, as it meanders through the season until it realizes there are only 5 or so episodes left. From there, it rushes to create a compelling ending and hope that, despite its lackluster beginning, its end will make you crave the rare anime second season you really have to question if it deserves. Genius investigator Keith Flick rejoins the royal police force just as serial killer “B” emerges. Mysterious youth Koku may be an ally, or a target.

The Show Fast Forwarding What Happened After The Big Climax, And Then Setting Up Another Twist For A Possible Second Season - 69%

The Past Was Often More Interesting Than The Present & Future - 75%