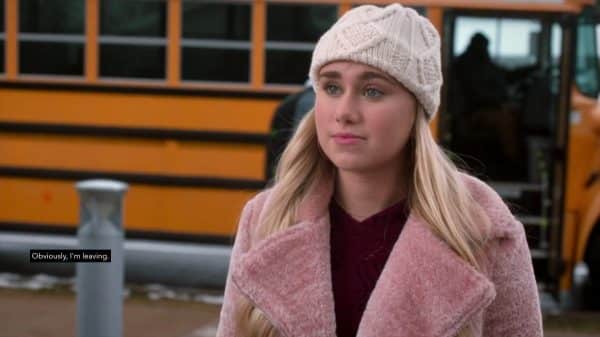 You’re The One That I Want: Rachel, Buffy, Marty

Buffy finally meets Rachel, Marty’s girlfriend, and just watching their banter makes her uncomfortable. In fact, within a half hour of meeting Buffy, Marty and Rachel are in an argument. Throw in Buffy hurting her ankle, and how worried he is, and Rachel decides it would be best to just break up with Marty.

That action, the following day, is followed up by Marty revealing his relationship ended, but don’t get excited. Marty hasn’t forgotten how Buffy curved him so he isn’t gearing to ask her out. He accepts she believes they work better as friends and seemingly won’t push them being something more.

You Lied To Me: Jonah, Amber, Cyrus

But, fortunately for Marty, he isn’t the only one being broken up with. Jonah, due to lying, and coercing Cyrus to lie, gets broken up with as well. For after dodging Amber, and clearly being a coward, she recognizes she deserves better. Though that doesn’t mean it doesn’t hurt her dearly to end things. Almost as much as it hurts Cyrus to think Amber is mad at him – which she isn’t.

With Bex seeing Andi’s art installation comes the idea that maybe a normal high school wouldn’t be best for Andi. She does have an excellent GPA, but clearly has a love for the arts which go beyond arts and crafts. However, one of Andi’s issues is that she hasn’t taken her art to the scale of winning awards or getting recommendations by her teachers. So the idea of trying to play catch up scares her a bit. And that’s before realizing she likely wouldn’t go to high school with her friends.

The Possibility Of Marty and Buffy At Last

With this show reportedly ending on episode 20, that means we only have 3 episodes to go, and that is more than enough for these two to get together. Well, unless you believe they are truly just meant to be friends. Which, if you do, I don’t know if we can be friends.

While it sucks that Jonah is a consistent punching bag, he makes such a good one. Especially since his attitude fits so well with a lot of teenagers. Making how Andi called him out, and Amber, prime examples of what to do when dealing with a guy like Jonah. Particularly if they are as charming as he can be, yet clearly don’t respect your feelings.

A Cliffhanger Is Brewing

Time has always been a weird thing on this show for it feels like these kids have been in 8th grade forever. So with high school now in the conversation, it makes it clear that we’re likely to end things on graduation. Which stinks in a multitude of ways.

First and foremost, the likelihood of Cyrus meeting someone, getting his first gay kiss, is more likely in high school than middle school. Also, there are all the new and old characters that could pop up. As mentioned, Walker could come back around, the girl Jonah was seeing for a hot minute (when he was seeing Andi), and others that were forgotten. Not to forget, we could finally see Amber in her element. In this episode, we saw her hanging out with two friends her age for the first time since, maybe, season 1?

But, unfortunately, despite Disney owning FreeForm and ABC, they don’t seem to push the idea of re-upping contracts so their shows continue onto a different network. Even though FreeForm has more than enough time slots for a few Disney Channel alumni.

The Possibility Of Marty and Buffy At Last - 88%

A Cliffhanger Is Brewing - 69%