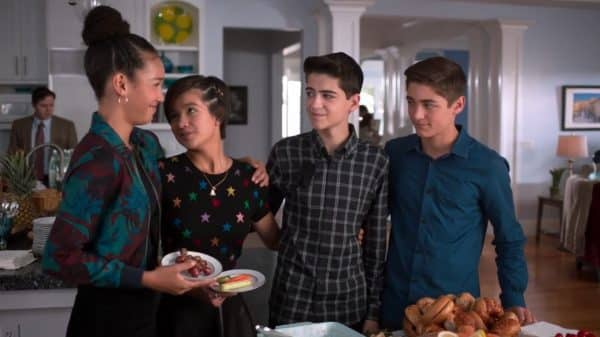 Andi Mack once again dives into a character’s culture, and this time it is Cyrus’ turn as we learn about Shiva.

For seven days, after someone dies, there is a mourning period. During this time, mirrors are covered, food is brought, and there are a lot of prayers, including one done by those who have done their bar mitzvah, the Minyan. The way Cyrus puts it, many Jewish customs and holidays are based around surviving and celebrating that feat while mourning those who didn’t make it. Shiva is no different.

With Bex trying to be hands-off when it comes to her wedding completely, CeCe and Andi continue to plan everything. But, one issue CeCe keeps having is that she is finding herself paying for everything but most of her decisions being pushed aside or forced into compromise. This is in comparison to Andi, a child, who got to choose the dress, the cake, and almost the centerpiece. However, with Cyrus taking note Andi is lucky her grandmother is alive, she lets CeCe have the choice of what the centerpiece would be since it would make her happy.

It’s Not As Big Of A Deal As You Think: Cyrus, Jonah, Buffy, Andi, TJ

Cyrus and Buffy both have secrets. For Cyrus, it is being gay, which no one in his family knows, besides his chosen family of Andi and Buffy. As for Buffy? It is that she is in continuous conversation with Marty. Both reveal this, but only Buffy’s secret is made fairly public. For Cyrus, after Jonah has a panic attack, he decides to throw in being gay as he explains the buffet table offerings. Which doesn’t phase Jonah at all.

Mind you, this is probably as far as Cyrus will go when it comes to talking to Jonah about being gay. It is explicitly asked if he’ll reveal his former crush and that idea gets shut down. But, what is left on the table is questioning when Cyrus will tell TJ? 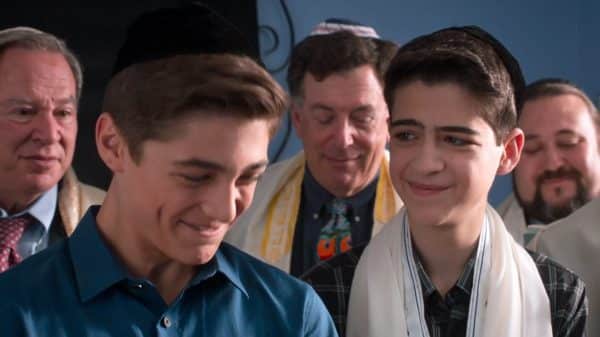 One of the many things you have to love about Andi Mack is that it doesn’t make us learning about its character’s culture into special, once a season, episodes. Things happen, holidays pass, and while the show doesn’t touch on every East Asian or Jewish holiday, they do clue you into some of the big ones. And strangely, despite decades of watching TV, many of which had Jewish writers and characters, I can’t remember any having Shiva.

Now, of course, I know Jewish people and have heard many say they want to be buried as the Jews do, one day it is over, and the next bury me, but what comes after for them was never discussed. So even though there might be far more to Shiva than we saw, it was nice to get an overview. Especially in terms of what to do and not to do – as shown by Bowie, and strangely not Jonah this time.

CeCe Getting To Make A Decision

As noted previously, there are a multitude of reasons that CeCe is so invested in Bex’s wedding – beyond outdoing her sister. The biggest might be that this is a culmination of Bex and CeCe reconciling, with longevity, so it is special. Also, this is perhaps the most agreeable Bex has ever been with Cece, trusting as well. So, in many ways, CeCe wants to savor this.

Yet, she has a grandchild in her image with strong opinions and who knows her mother’s taste. This complicated this dream of CeCe, which could also be her living vicariously though Bex. But, thankfully, while Andi sees this as a culmination of things she has wanted too, she is willing to share a moment which means so much for their family.

More than likely, with this upcoming generation, I think we can expect coming out to get a Jonah-esque response. Not a “Who Cares?” type of reaction, but it being such a nonchalant thing it’s like saying your favorite color. And what makes the moment, which lasts less than a minute, so special is that it is on the Disney Channel. A network which has been slightly progressive, in measured doses, but since the often cited Girl Meets World, really has made leaps and bounds. Something you don’t really expect from media directed as minors, but Andi Mack might be one of the few examples of Disney showing its power in media and not feeling the same threat other companies might have had with a story like this.

Waiting To See Marty and Buffy In The Same Scene Again

Being that I didn’t expect to see Marty ever again, having to wait until he and Buffy are face to face is difficult. Yet, with us knowing it is coming, I can’t help but get a little giddy. Even if Buffy is still easing her way into being anyone’s anything, beyond a friend. Though, with that dance coming up, I feel like she may push through what she is going through and ask Marty to it.

Leading to the thought, do you think they may give Buffy some kind of insecurity? For while we have seen her confident in most matters of her life, maybe she thinks she’d make for a bad girlfriend, isn’t cute enough, or something like that? Not to rehash old ideas, but I can’t get over her noting Andi probably wasn’t ready for a relationship last season, and maybe if she feels the same way about herself. Be it because she doesn’t have an example of a day to day couple in her life, or isn’t comfortable feeling so strongly for someone that they can hurt her. For just dealing with how much influence her mom has on her emotions seems hard for Buffy.