Everything that led up to the Battle of Stronghold and the end of the Envoys is chronicled, and it is a bit of a mindf—.

The Sacrifices I Made For You (Part 1): Rei, Takeshi

To say Takeshi and Rei lived a traumatic life would be an understatement. After watching his mother be abused, murdered, and body disposed of, Takeshi finally got the strength to kill his dad Jakub when it seemed he’d go after Rei next. After that, they got split up. The deal was, Takeshi would hand himself over to CTAC (Colonial Tactical Assault Corps) in an agreement with Jaegar so that while he may belong to defending the Protectorate, his sister would have a good life. They’d be separated, but have a good life.

Well, never trust a Protectorate. Takeshi, on a Yakuza raid, learns his sister was sold off to become a Kobun, a child soldier. Which, no sooner than he learns his sister is alive, and perhaps feels like he was pitted against her, do they join forces and kill every Yakuza and CTAC officer they were working with. Thus putting them on the run but having each other. 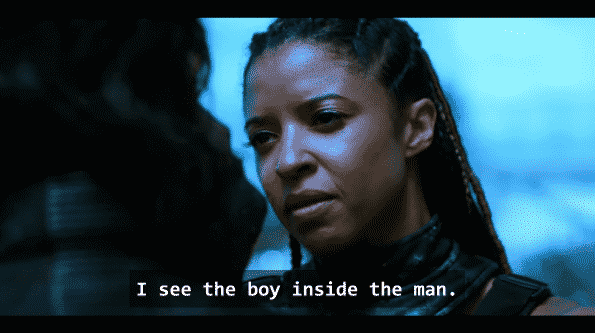 But while back together, there were still many issues to work out. While Takeshi may have meant well, that doesn’t mean Rei’s life was easy by any means. It isn’t made clear what may have happened besides her being trained to kill and doing as she was trained, but you can imagine with the way woman are seen and talked about, what likely could have happened.

But, now free and back together, after 28 some odd years, they swear to put family and each other first. Which remains what they agree to do until Quell and the Envoys come into their life. First to threaten Takeshi’s, but with Quell seeing something in him that she could use, and him agreeing to join the Envoys for revenge, they join forces and fall in love.

A love which isn’t immediately revealed, though banter and engaged looks make it clear something is there. Something which Rei becomes jealous of. Not in some weird incest kind of way but when you have no one, it makes anyone threatening taking that away from you a threat. So as Takeshi goes from using the Envoys, like Rei, for safety to becoming an integral part, she comes up with a backup plan.

The Sacrifices I Made For You (Part 2): Kovacs, Quell, Rei, Takeshi One in which leads to the Battle of the Stronghold and the undoing of all Quell has worked for. Though, it is noted, she is what started the problem in the first place. Yup, Quell, original name Nadia Makita, was the one who made stacks. An invention which may have, at first, changed the world for the better but in her paraphrase of the famous Dark Knight quote, all good things eventually become corrupted.

Stacks allowed her and others to extend their lives, reach their goals, explore and see the universe, but also unlocked the shackles which put a check on things. The rich and powerful dying was the only thing which led to some kind of attempt to tip the scales. However, with immortality achieved, now there is only but one option: Infecting the central core and putting a 100-year cap on everyone. A dangerous mission, as you surely can imagine, and not one Quell planned to return from.

Nor one Takeshi was likely to survive. So, always putting family first, though maybe being infected by the same Rawling virus as everyone else, Rei killed Quell and thus ended the rebellion. But, in seemingly making an agreement with someone, be it Jaegar or another party, her stack was uploaded and here she is today. She is alive, wealthy, goes out in the sleeve of Clarissa, Hemingway, or even a little girl, and after 250 years has been reunited with her brother.

It took a long time for that sacrifice to mean something, but at last he once again is all hers.

“[…] every birth is violent and there’s no death without pain.”

You Got Me Feeling Emotions Though not crying, there is a light pressure on my chest and my eyes feel moist. Because this whole situation is ridiculously complicated. On one hand, you want to damn Rei for killing Quell, ending the rebellion, as well as killing Takeshi’s first love. One which still haunts him to this day. Yet, on the other hand, considering the abuse her mom went through, that Takeshi saved her from; the hell of a life, which Takeshi took her from; and the kind of love which probably was foreign before he found her, in a twisted way you can kind of get it.

The only person who ever loved her was Takeshi and on top of Quell taking him away, she was about to take him on a journey to the true death. On top of that, make it so not only would Takeshi die, but so would she. The person who crafted immortality was trying to take the miracle back and only ask a handful of people if that would be okay?

Now, as for when and how she got in contact with Jaegar, or if she was in contact with him the whole time? Who knows. Heck, there is also the question of how she became so well off. But, despite her sins, even killing Quell, who went beyond being a bad ass but perhaps one of the top sci-fi characters I can think of, female or otherwise, I feel bad for her. Which probably doesn’t make a lick of sense but between the actress and the writing, her motive makes sense. It is selfish as hell but who has she known to be given and selfless besides the one she did all of this for?

But, now comes the question, with Takeshi knowing the whole truth, how will he address it? He and Rei are two sides of the same coin. Can he, knowing what she did, forgive her? Hell, can he trust her not to repeat her past selfish decisions based solely on keeping him alive? Well, that is hard to say. Though, what is becoming clear is that Rei is the newest suspect in Laurens’ death and it may not have been to end his life, but simply be a catalyst for all we have seen thus far.