The team gets framed for a robbery and it leads to not only some of the best writing in a while, but one person’s job on the line.

On Franklin’s last work day before retirement, not only does he get locked in a bank but was left foaming in the mouth. Also, whatever toxin he was inflicted with killed another person and could have killed Hen, who was trapped in the vault with him. Luckily, the team all come together, including Michael with blueprints, to access the vault and save Hen and Franklin. 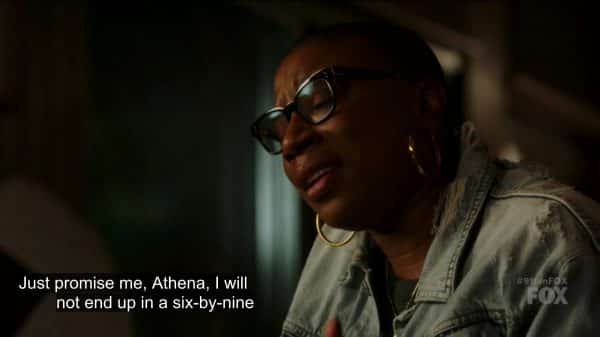 Hen: Just promise me, Athena, I will not end up in a six-by-nine.

However, no sooner than all the hub-bub is over, the cops show up and find $300,000 in a truck. Leading to nearly everyone involved being a suspect. This leads to us learning Hen’s wife lost her job, big things for Bobby, noted in the next topic, Eddie being suspected since he is working two jobs now, Maddie since most of her calls lead to her brother being involved, and so much more. Including Chimney being suspected, since he has been off for 6 weeks, Michael since he used a man’s crush to get blueprints and as for Athena? Well, she gets involved for comic relief.

Okay, not just comic relief but to share a few Black moments with Hen and Michael. Be it her being the one who calms Hen down, who is freaking out about ending up in a cell with Eva – since she is the cops prime suspect. Also, there is Michael who makes it clear he did what he did for his girl since, between being Black and Queer, they got to look out for one another. But, in the long run, all but one are cleared.

They Found Out Something They Shouldn’t Have: Bobby, Franklin, Marty, Hen

Everyone on the show has a past. Some with quite a bit of tragedy and hardship, others who had to persevere, and some got lucky. Franklin and Marty didn’t get lucky. They were the true masterminds behind the robbery. These two former brothers in law used Franklin’s knowledge of the bank and Marty’s knowledge of the fire department to steal the $300k, and the idea was Franklin would use scorpion venom, which Marty was using for his arthritis, to cause a scene. Thus leading to Bobby and his team showing up and providing a distraction so everyone would focus on the bank and not the armored car with all the money. 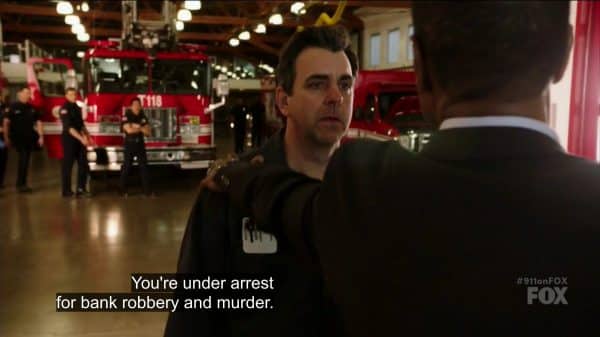 Marty was to get the guy out, get the money, and they’d be done. However, Hen wasn’t factored in nor was Franklin double crossing Marty. For why share money when you can have it all? So, while Hen was out, Franklin stole $6 million worth of diamonds and while being treated in the hospital, snitched on the firefighters. Thus leading to the money being taken and in the chaos, Franklin was going to leave the country. Problem is, how do you move $6 million worth of diamonds?

That part, moving the diamonds, not thought through. Hence Franklin dying of intestinal blockage from thinking he could swallow them all and then just poop them out later. However, that doesn’t happen, and when Hen realizes Marty is the one who framed them, he nearly gets the murder charge for Franklin. Lucky for him though, that charge gets dropped, but not the litany of others which includes the guard dying.

Leaving one last thing: Bobby. With the cops looking into Bobby’s past they learn about the fire in Minnesota. Which, when Bobby’s chief hears about it, that triggers an investigation. One which could mean Bobby losing his job.

Outside Of Backstory Episodes, It’s The Best In A While 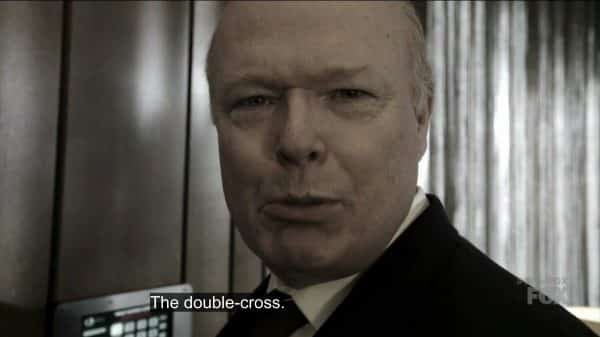 Emergencies on this show have long lost their luster. Especially since, 9/10, the only time anyone is in danger is when they are off work. Both of the times Chimney almost died, was on his own time. Even with Athena nearly always being around near an explosion, being around a cannibal, and things of that nature, nothing bad ever happened on the job. Which made this bank robbery episode different for it addressed each characters’ personal life but shook things up. After all, considering how creative some of the rescues have been, the fact this is the first one which got investigated to this extent shakes things up.

Add in that there was a subtle nod to Hen’s fear of being penned for the crime, as many Black people are scared of, Michael noting he had her back, and Athena hunching it all off, it made for a better than average episode.

Formerly, the show was mostly about Bobby, but the love got spread around in the latter half of season 1 and especially in season 2. Making revisiting Bobby’s past, which we know most of the details of, a mixed bag. Partly since we got the big parts of him being an alcoholic, the fire which killed his family, and him escaping that. Not to forget, him deciding after he personally saved enough people, he’d kill himself. All powerful stuff.

So, us going back to see his transition from the Midwest to LA? I can’t say I’m that excited. Is it filler? No. However, what can be presented that can end this season on a high note? We know the shocking parts already so will they just focus on how his privilege allowed him to lie and get his job?

Outside Of Backstory Episodes, It’s The Best In A While - 85%