We journey a bit into Doug and Maddie’s history and are left with an ending which ends a chapter in both of their lives.

How They Were Before: Maddie, Doug

It isn’t necessarily clear how things began, but it becomes clear what was the beginning of the end. It started not too long after the wedding, when it became clear Doug had anger issues. However, it became a serious issue once Maddie began to realize others were catching on, calling the cops, and she was forced to realize she couldn’t hide it anymore. That she had to run.

The State of Chimney: Chimney

Despite a punctured lung and a lacerated stomach, Chimney is fine – by the standard of being alive still. Mind you, he is getting as tired of ending up in the hospital as everyone else, but he’ll live. Heck, considering the whole rebar situation, watch him, within a few weeks or months, be right back to work like nothing ever happened.

With Doug tossing his phone, getting into a cabin that wasn’t rented and acquiring a gun along the way, it seemed over for Maddie. Not that Doug wanted to kill her, but it was clear she’d never develop some Beauty & The Beast type love affair with Doug. Whatever feelings she had have long been tainted and while she could maybe hope for the best, being with him was not an option. Hence her hitting him over the head with a fire log poker, multiple times. Leading to him chasing her, and shooting at her, multiple times. Maddie: How are you feeling?

But, in the end, with realizing she is leaving footprints, and he really was not going to let her go, she did what she had to – she killed Doug. Leading to, luckily, thanks to some slightly illegal actions, Buck finding Maddie, with Athena’s help, and the episode ending with Maddie and Chimney together again. Granted, bandages up with new scars, in more ways than one, but back together.

In A Short Amount Of Time, You Understood Maddie’s Fear

It’s easy to forget Maddie is a relatively new character sometimes considering her arc thus far. Yet, taking note of her fear seen since her introduction and how things were between her and Doug, it gives you a full understanding of her character. Why she felt the need for so much security features in her home. When it came to Chimney, why she was so hesitant considering what a nice guy we’ve known him as and, ultimately, when it comes to victims of women like Doug, the paranoia involved. After all, until they’re dead, they can haunt you and, honestly, even in death, who is to say they still won’t be lurking every shadow, whispering about your insecurities, and saying someone will never love you like they do because you aren’t worthy?

It Overall Respected The Situation More Than Used It For Drama 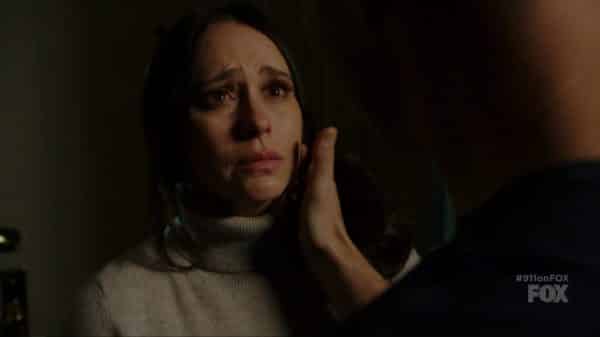 I can be a very weird fan, and I admit this. For example, if Ryan Murphy’s name is on something, more than likely I’ll watch the first few episodes. But, with watching his productions since Glee comes seeing patterns I wished his team would break, especially once he has moved on and is just a name during the beginning or end credits. One of the things, for a long time, was sensationalizing certain stories which deserved to be taken more seriously. That is, alongside treating the women of color on his shows as more than simply amplified versions of the stereotypes white gay man love.

But that’s a whole different thing for someone else to write an article about. The point is, with Maddie’s storyline, we didn’t get the kind of drama Murphy is known for, and in an interview which came out within the last two years, he addressed how he used to handle his shows. To make a long story short, he acknowledges he went for the shock over the substance, but with being established like he is, he is getting away from that. Maddie’s storyline, and how Jennifer Love Hewitt was allowed to perform, shows that’s true.

Chimney Can Survive Anything, Can’t He?

I love Chimney, don’t get me wrong, but I need this to be the last time his life is threatened like this. Especially if he ends up going back to work, like after the rebar accident, and his life is unaltered. For I never got over how he just happened to be so lucky that a bar went right through his skull and didn’t hit any point to mess with his motor functions at all. That, from what we’ve seen, it didn’t make it so he had to be on light duty or none of that. He went back to work and unless my memory is failing me, pretty much picked up where he left off.

Now, I’m not saying they need to make the man a liability, but with a punctured lung and lacerated stomach, I need his life to change. Otherwise, there might be a need to wonder if Chimney’s part of this show is showing that it isn’t just being a first responder which is dangerous but living everyday life in general.