Desperate times call for desperate measures as Clay fails to do much for Hannah on the stand and there are multiple incidents at Alex’s birthday party.

With Clay taking the stand, naturally what is honed on are the moments where he messed up. Something which he may express guilt about when it comes to trying to compensate but fully owning it? Not so much. For there were multiple times he messed up before that night he kissed Hannah. There was not writing Hannah that summer, despite saying he would; not taking her seriously after they had taken Molly with Jeff, and some friends, and she talked about dying; and despite, verbally being told, he is her last friend, disappointing her like everyone else.

Something Sonya drills into Clay’s head but it doesn’t break him to the point of maybe starting anew like the others. The way she breaks Clay down leaves him damaged, desperate, and feeling like a failure. To the point he realizes there might be one last thing left for him to do. A part of me wonders why Sonya isn’t getting any hate here. She has gone extra hard on everyone yet they still fight amongst themselves. Then with Clay, considering she is the one really dragging Hannah’s name in the mud, you’d think more of his animosity would be geared towards her than Zach, Alex, and the rest of them. I mean, she is the one crafting the narrative being put on the blogs and everything.

But, lest we forget, Clay is delicate and emotional in a way which is by no means productive. He gets blinded by his feelings and finds his outbursts justifiable. Heck, the majority of his actions in general, even if they aren’t in other people’s best interest. Making you wonder, has everyone underestimated the effect of Hannah’s death on him? Considering how Alex had to be protected from the tapes, perhaps should Clay have been protected from them too? Because while everyone is struggling, before Sonya and after, Clay’s mania is at an all-time high and it seems he needs a real rebuke, hitting rock bottom in a bone-crushing way, to ever find himself a new normal.

It’s Alex’s birthday and he isn’t really in high spirits. Yes, he can get boners again but with Bryce still free, he can’t deal with seeing him in the halls much less picking with him. So he calls him out, screams down the hall, that he is a rapist. Which for Jess leads her to decide she needs to step away from Alex and hang out with Nina. For she is becoming triggered.

But, hanging with Nina has mixed results. While she gets to see Nina and her boyfriend of 5 months be cute, she gets triggered in the dressing room and has a full-on flashback which Nina has to help her calm down from. Also, it leads Jessica to learn Nina’s boyfriend doesn’t know what happened. Something Nina explains as not wanting the assault to define her, which makes sense, but also confuses Jess a bit.

Though, the bad day doesn’t end there. After Tyler had a pretty good day, such as him and Mackenzie arranging a date, he runs into Alex and his dad, Alex’s dad, at the Baker’s pharmacy. During that chance meeting, he is invited to Alex’s birthday party but barred from it by Jessica and Zach. Thus leading to Tyler wanting to target Zach and Alex getting mad.

However, him getting mad about Tyler being barred from the part is but a warmup. Zach lying about who he is hanging with and where he is sets him off, his dad not letting him play a shooting game, and then comes the point where he outright says he wished his aim was better. Thus leading to a bit of a cathartic release for Jess since she has gone through so much that day and once again, Alex finds himself flaring up her emotions.

For, in Jess’ mind, Alex killing himself after Hannah and what happened to her, that felt like abandonment. She needed him and he tried to permanently leave. Which, as Alex hears these words, his fire gets dosed and he is all apologies. However, it might be too many things said to forgive for now.

Keeping secrets to protect yourself and people you love has been a running thing here. Especially with the trial but it has kind of spilled over now. For while Alex’s situation is a known secret, like Jessica’s, it is the type of thing you want to own. That you want to control how people treat you and the narrative around it. Yet, you can’t really control people. As seen through Clay’s adventures, and the trial, people take things different ways and how they can try to help in different ways too. Sometimes making things better but arguably, to various degrees, making them worse.

Take, for example, Alex extending an olive branch to Tyler. Though he is aware, by the tapes, of what he did, it has come to a point where there is a mutual agreement to change the narrative. To let Tyler not simply be the perv or Alex just another bully at school. Yet, an agreement between two didn’t mean Jessica and Zach were going to go along with it. They wanted to maintain control of Tyler’s narrative and with him feeling like he was making progress with new friends, a girlfriend maybe, and being forgiven by his fellow tape-mates, so came the rainbow after the storm. Something Zach and Jessica stole from him.

And speaking of Jessica, you have to wonder how she really felt about Nina saying she doesn’t have her boyfriend know about her assault. Does she see it as lying not telling someone you were dating, for 5 months at that? Or, like Nina, she sees it as a moment not worth discussing and dealing with the negative connotations of? Especially in terms of pursuing a normal relationship.

But, with that said, so comes the question of whether Nina still deals with triggers and how she explains that to her boyfriend? Something which seemed like it could have happened in the store since, like with Jessica, clothes, taking them off, is part of what Nina said haunts her. That and feeling uncomfortable in her own body. So her boyfriend kissing her on the neck and things like that, it makes you wonder how she got pass what Jessica hasn’t figured out a way to yet.

For, taking note survivors likely are all triggered differently, that kiss seemed like something which would lead to a negative reaction.

With Alex unable to take the stand, Jessica not helping, Zach not helping, Marcus not helping, Courtney not helping, and who knows what Bryce, Mr. Porter, and Justin may do if/when called, Clay goes Nuclear. With reading the comments about Hannah, he decides to make the tapes public. This is despite ghost Hannah noting she wouldn’t want this and didn’t want revenge. If anything, she wanted to own and express her story. However, with her dead, Clay alive, and him ready for a Pyrrhic war, he uploads them for the world to hear. Which should have an interesting effect on things. 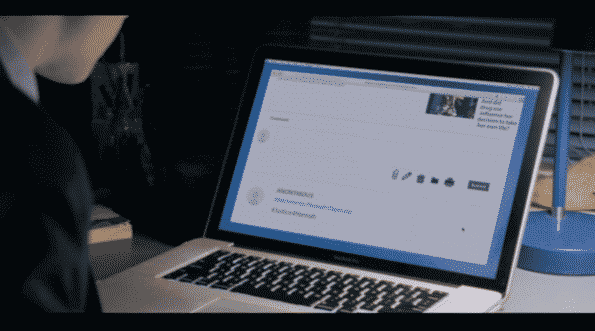 Something I noticed throughout this whole trial is we never see the reaction of the jury. We never focus on their take and it is just what we hear at the school and vaguely get from reporters and bloggers. I wonder why?

That thought aside, you have to wonder what this means for the trial and Clay’s mom. For already, housing Justin, that’s dangerous. So imagine her son using and finding evidence and making it public. Especially since this whole case deals with people under 17. Making it where, assumingly, certain protections are supposed to be in place.

But, you know Clay. He is a bottle of emotions with no real outlet. There is no drawing, writing, sports, or even talking to someone really. He may call Skye throughout the episode but him talking to her is like Hannah talking to the tapes. It provides a minor cathartic release but it isn’t a real push to solve his issues. He is still bubbling up inside and not really reaching out. Much less, pushing people away when they try to help him on his insane quest or just see if he is alright.

I want to close a door I can never go back through.

You gotta handle the lows if you wanna chase the highs.

I mean, by no means am I saying it should be normalized in terms of being considered accepted or acceptable. However, taking note of what Clay says about kids keeping secrets, either to protect themselves or loved ones, making these topics play out in a real way creates a reason for conversation. That is, rather than it be like Zach and his mom’s relationship where things which are hard truths get avoided because they are too uncomfortable.