Wherever I Look
Recaps, Reviews, and So Much More
Home TV Series 13 Reasons Why (Thirteen Reasons Why): Season 2/ Episode 6 “The Smile at the End of the Dock” – Recap/ Review (with Spoilers)
TV Series

13 Reasons Why (Thirteen Reasons Why): Season 2/ Episode 6 “The Smile at the End of the Dock” – Recap/ Review (with Spoilers)

As Zach reveals there was more to his relationship with Hannah, Clay deals with the fantasy in his head of who Hannah was not matching up with reality.

Table of Contents show
1 Guess Who/What Is Back: Jessica, Alex, Justin, Clay, Lainie, Matt, Zach
1.1 Commentary
2 My First Love: Hannah, Zach, Bryce
2.1 Commentary
3 Reconciling The Ideal With The Real: Clay, Hannah, Olivia, Andy
3.1 Commentary
4 Miscellaneous Commentary
4.1 Tyler And Cyrus Went Shooting With Their Dads
4.2 Jessica and Nina – Owning and Telling Their Stories
5 Highlights
6 Low Points
7 On The Fence
8 Follow Wherever I Look on Twitter, Like us on Facebook and Subscribe to the YouTube Channel.
8.1 Previous Episode’s Recap
8.2 Check Out Other TV Recaps

Despite it seeming Justin could have exited as quickly as he returned, instead he tries to figure out what’s the truth. Did Jessica want to see him again or not? And the answer is that she wishes he was dead. For with the way she sees things, he is a factor of her rape and with that, seeing him is painful. Yet, with him collapsing as he was leaving, she finds herself worrying about him all over again.

Though she isn’t the only one worried, Clay’s parents, Lainie and Matt, are also worried for not only is Justin currently in contempt for not responding to his subpoena but they think he broke into their house. Mind you, to get back in after Clay has been hiding him, but still. Truth is, someone else did to likely plant some sort of fear in Clay but they got too spooked to finish the task.

Oh, and speaking of finishing the task, though that is probably a bad segue, Alex can get erections again! Strangely it comes about when having bare skin, chest to chest, contact with Zach, fighting over him learning he has plateaued in his recovery, but a boner is a boner. No need to question why Zach led to it. Well, at least Alex won’t but I will. Is it just he really need to be riled up before the man downstairs decides to come out or is it just something about Zach? I mean, could it be the shot to the head changed some of Alex’s chemistry so now his body responds to dudes more or he just spoke too soon about plateauing? It is all really hard to say since the brain isn’t the easiest thing to understand and with Alex trying to blow it out of his head, it makes understanding why his body decided to respond then complicated. But, hey, at least he can get it up. For someone barely 18, losing the ability to get an erection likely would be a death sentence.

Switching to Justin, yay for him too. While Jessica may not want to set eyes on him, at least he has a functional place to stay now. That’s a win. Also, it seems, when it comes to his withdrawal symptoms, the worse is over. So that’s a victory too, right?

It must be hard trying to comfortably live in Bryce’s shadow. Much less, within a team which is supposed to be like brothers but you don’t really agree with what your brothers say or do. Not to paint Zach as someone as innocent as Marcus claims to be, but you get the idea.

Perhaps Hannah did too. For as awkward as Zach can be, he is also sweet. His parents raised him right and that might be why he was Hannah’s first. In terms of sex and maybe relationship as well. For throughout all of sophomore to junior summer, they dated, made out, had sex, and she was even there for him when Zach’s dad died. A welcome change to Zach’s mom who, even in present times, doesn’t really think much, if anything, is wrong. If not, more so, isn’t willing to admit it.

But, like every other person in Hannah’s life, Zach let her down. He wanted to keep her hidden, not reveal her to Bryce and the rest, and so with feeling a bit ashamed and a bit insecure, they broke it off amicably. Well, at least it seemed amicable. 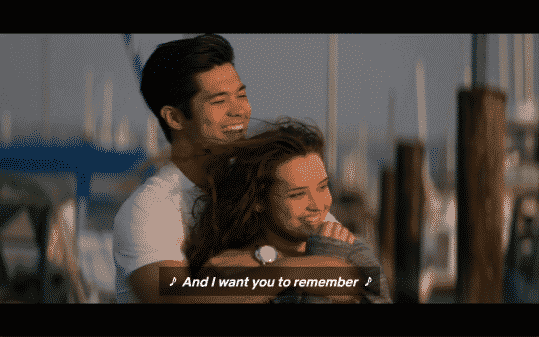 “And I want you to remember”

It’s very weird how they are adding details to what happened after the incident which landed everyone on the tapes. On one hand, one of the things I praised about the first season was how they fleshed things out. However, with this one, it is hard to say what is fleshing a storyline out or milking it? For, don’t get me wrong, the Hannah x Zach romance was so cute I totally ship it and would love for it to be canon. The problem is, increasingly it feels like these storylines are coming out of nowhere to justify Katherine Langford to be around more.

Which isn’t a bad thing whatsoever but it does begin to take away from Hannah’s decision to kill herself a bit. For when under the impression her life was just an escalating set of disappointments, you are put into Clay’s possession and thinking the world didn’t deserve Hannah. Yet, the more we know the more you feel the need to scrutinize her decision and that’s hard to deal with. Especially if, like me, you understood the decision under the guise of the downward spiral.

But, with Nina and Jessica’s story, perhaps the idea might be that Hannah was able to deal and survive a lot but the rape straight up broke her beyond repair.

Reconciling The Ideal With The Real: Clay, Hannah, Olivia, Andy

As you can imagine, after everything they hear, Olivia, Andy, and Clay are having a hard time reconciling the Hannah they know with the daily reports from the witnesses. This one though, Hannah having sex, a multitude of times, in the Baker household, and basically having a full blown relationship no one knew about? That blows all of their minds. Olivia and Andy in the usual form of, who knew? But, of course, Clay takes it the hardest.

Which only makes him look like a bigger douche for it always circles back to how he feels. How hurt he is that he wasn’t her first, that they didn’t date, that he wasn’t enough and blah, blah, blah. Making it where, to my surprise, ghost Hannah is still around for, at this point, with his Hannah being a figment of his imagination, I’m surprised this ghost still exists.

Making it seem she may be legitimately Hannah and not just some PTSD manifestation. 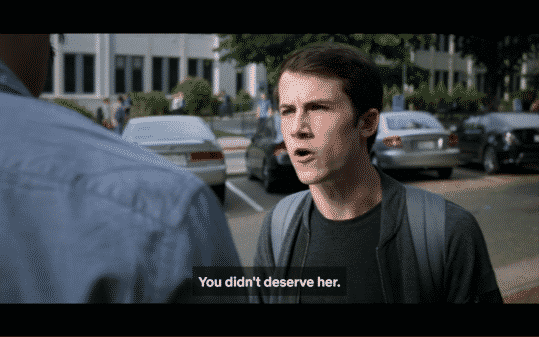 “You didn’t deserve her”

I think there is a real lesson here not just about consent but agency. Especially with Clay for him thinking less of Hannah for sleeping with Zach is messed up. But, considering the double standards that get noted by Zach and also Jessica in her episode, even “nice guys” fall into that nonsense. I mean, remember season 1? Clay fell for rumors multiple times like an idiot. All because he thought, not my Hannah.

And it is the possession bit which is the most problematic thing here. This girl he only kissed once and crushed on for the longest, it is like he felt some sense of ownership over her. So how dare she not wait for him and sleep with a truly nice guy? A bit of a wimp, in terms of standing up to Bryce when it counted, but a nice guy nonetheless.

Tyler And Cyrus Went Shooting With Their Dads

Um, you remember how big of a deal it was when they went into detail about Hannah’s suicide? Yeah, showing how to load a gun up close, let’s throw that in the bucket of questionable decisions. Especially after the boys, in secret, decided to take some guns and practice. For while I get open communication is the best method of parenting, this raises a bit of a red flag. If only because, white outcast is the general description of most school shooters.

Jessica and Nina – Owning and Telling Their Stories “And you should be so proud that you told yours tonight”

Having the strength to speak about your story of assault, much less share it to strangers, isn’t something which should be taken lightly. Especially with Jessica and Nina breaking down all the after effects. It makes your clothes feel foreign, your body perhaps forever uncomfortable to you, and not just in terms of it being seen or being in your own skin. Naturally, there remains this desire for intimacy but when someone took your agency and made your desires complicated to accept, live out, and express, that screws not just you up but your potential to have a healthy relationship. For triggers will always be present and trying to find someone willing and able to understand, on top of finding someone you like in general, means another obstacle to face. One which shouldn’t have existed in the first place.

This is great!! This is really one of my favorite episode in season 2. I made a fanmade video of Zach and Hannah’s relationship. If any of you wanted to check it out. https://youtu.be/P8luINvztmw