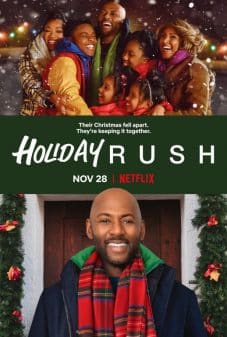 A holiday film focused on a Black family, which focuses more on being inclusive than diverse? November 28th couldn’t come soon enough.

Popular New York radio DJ Rush Williams (Romany Malco) has been spoiling his four children since they lost their mom. Unfortunately, the kids share their pricey Christmas lists right when he loses his job. To keep Rush on the air, his producer Roxy Richardson (Sonequa Martin-Green) and his Aunt Jo (Darlene Love) plan to help him buy another station — if the Williams family can downsize fast and embrace a simpler life. In this heartwarming film, a loving father reconnects with his children and opens his heart to love when they all learn that true joy comes from not what you have but who you have around you.

While we are all for diversity and seeing communities look as they are, there is just something about seeing a production which is hype focused on one culture or ethnicity. Granted, it isn’t 100% clear what is Rush’s Black experience and how it might be shown. Also, just because terms like “Bougie” are used and this has a slight Black-ish vibe, it doesn’t mean the film may venture towards diving into Black culture at all. For what we know, this could be mostly color blind with maybe a few nods.

Either way, between the possibility of this being a Black holiday movie, featuring a predominately Black cast, and a Black man who seemingly will fall in love with a Black woman? Let’s not forget he is also about to start his own business as well. Granted, he is buying an established radio station and rebuilding and branding it, but there is something beautiful in the various ways you can see this being a potential classic – if done right.

All that is left is Darlene Love singing a new or classic tune and making it her own. Oh, and Deon Cole getting to be Deon Cole.

Amari Allah - Modified date: March 28, 2020
Earthquake Bird is a slow-moving psychological drama that focuses on the emotion of guilt to drive its leads breakdown.

Amari Allah - Modified date: September 27, 2019
In the Shadow of the Moon is written more to be the start of a series than a singular movie - and it shows through its characters.

Amari Allah - Modified date: October 10, 2019
Jexi, while hilarious, may also make you want to set up boundaries with your AI assistant. Just as a precaution.

As Ben becomes overwhelmed with the truth, he starts revealing it to anyone who can and will listen – including the last person he should say a word to.
Read more
TV Series

Someone ends up dying this episode as the FBI cracks down on Marty’s operation, and Ruth learns where she stands.
Read more
TV Series

As men come around, and what is called the “Beltane” begins, someone from Scylla’s past threatens her relationship with Raelle.
Read more
TV Series

After Elena spending so much time in Lila’s world, things are flipped, and with that, we see some old demons pop out.
Read more