Wherever I Look
Recaps, Reviews, and So Much More
Home Movies The Foreigner – Recap/ Review (with Spoilers)
Movies

The Foreigner – Recap/ Review (with Spoilers)

In The Foreigner, Jackie Chan combines a timely backstory, mixed with a slightly generic plot, and the type of action you’d only expect from something with his name associated with it.

It was 1984 when Mr. Quan (Jackie Chan) immigrated to England from south-east Asia. Since then, he had a quiet life. He opened a Chinese restaurant, was dealing with losing his wife and two daughters, and raising the only family member he had left. But then a terrorist attack, by the IRA, happens and then he is left with just the woman who works in his shop, Lam (Tao Liu).

Leading him to, naturally, want answers. He sits in the office of the cops each day and then sets his sights on Liam Hennessy (Pierce Brosnan). A man who has risen through the ranks from a former IRA member to now being a government official. Yet, he still has his hands in IRA matters. Something which Mr. Quan latches onto as he repeatedly asks for the names of the people involved with his daughter’s death. First nicely, then through bomb warnings, and then through Mr. Quan dismantling, but not killing, Hennessy’s protection.

Thus giving us another one of those, “I will avenge my daughter” type of stories with an immigrant twist. 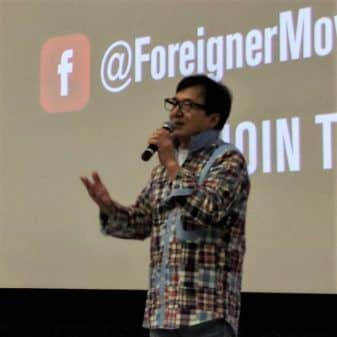 Jackie Chan came to the screening.

A New Spin On An Old Tale

A special ops soldier who changed his life for normalcy and is forced to use his training to avenge his daughter. You’ve seen it so many times before. However, now there is a spin on it. For one, there is an immigrant story here. Mr. Quan immigrated, like many immigrants, because he wanted a safer place for his family. One in which he hoped to escape terrorism and things of that nature.

Leading to another thing I quite enjoyed. The terrorist in this were white. Not Russian white, but IRA, everyday kind white. Which I found to be important for the victim that we connected with was an Asian man. An Asian immigrant at that. Someone who seemingly did all he was supposed to do. He legally became a citizen, provided a service to his community and, from what we were told, didn’t cause any trouble.

And perhaps the last thing which brought an interesting spin on this was the villain’s motive was understandable in a way. I may not know much about Irish history, but I know there are serious issues between them and the English. And while, of course, I don’t endorse the idea of terrorism, be it through oppression or retaliation, when it comes to Hennessy’s past or present work with the IRA, it is hard to not see him as the hero of his own story. If not fallen hero depending on the character. For I’m sure a united Ireland isn’t just something floated about but probably something that is highly desired. Like the idea of one day there being a united Korea.

So with that bit of history and us focusing on the collateral damage, it is hard to not feel for both sides despite some of the choices they make.

It isn’t clear if, at 63, Chan is still doing as many stunts when it comes to his fight scenes, but similar to Atomic Blonde, you will be flinching when he lands blows or he takes them. But also, at the same time, between him or his stunt person, even with him barely, if ever, using a weapon, you will find yourself saying, “DDDAAAAAAAMMMMMMNNNNN!!!!!!” For there is just this certainly quality Chan demands which makes it so punches are punches and kicks are kicks, and what you get does not in any form look like sports entertainment. Yet, at the same time, it goes without say, do not try what these professionals are doing at home.

Straight To The Point

Pretty much everything said by Mr. Quan is a remix of this line.

Mr. Quan is not a talkative man. He is very to the point and he just wants names. There are no arguments, there isn’t a lot of explanation of his feelings, he just wants his revenge and then to return to his shop. Which you have to appreciate. For Chan does so much in silence that would lose all of its impact with dialog. Even when we see him lose his family, there are no words just the act and reading what happened to them. Making The Foreigner one of the few, outside of Logan and perhaps Furious 7, action movies which not only deliver on what is promised but give you something to be emotional about as well.

I must admit, the back and forth between Brosnan and his associates, be them IRA or within the British government, doesn’t really inspire much interest. Even when it comes to his personal affairs and his family drama. It helps you understand Liam isn’t some generic villain with happenstance reasons for what he does, but we aren’t given a compelling political thriller either.

Though the storyline is just a remix of a well-worn tale, what Chan brings to it is so timely. He combines the immigrant story with a reminder that they can be victims too. He gives us that cool and dangerous silent fighter and shows that even at 63, be it with or without a stuntman, he is still one of the baddest in the game.

But what really pushes this over, and makes this recommended, is that both the hero and villain you can feel something for. It’s naturally easier to feel for the hero, but the villain to has a motive which may lead them to making horrible and violent decisions, but you can understand that, with their hand forced, that was the best choice in their minds at the time.