Have you ever cried because of a sci-fi movie? Well, believe it or not, despite a small cast, TAU will make you anxious, cry, excited, and become a potential Netflix classic.

In an undisclosed year, in some kind of pseudo-dystopian future, while all of mankind hasn’t gone to hell, for many it seems that way. Such as for Julia who is a grifter. One which works alone and seemingly has been alone since she ran away from her abusive household when she was a teenager. But, being alone and living alone comes with risks – such as being kidnapped by a genius, mad scientist named Alex. Someone working on a sentient AI program known as PSI for a billion-dollar contract. Something which would make his partners at Upton Tech, which he is CEO of, very happy.

However, there have been some bumps in the road in completing the project and now the presentation is within days. Making the inclusion of Julia necessary but ultimately perhaps one of Alex’s greatest mistakes.

They gave me life, but I did the rest. I created me. 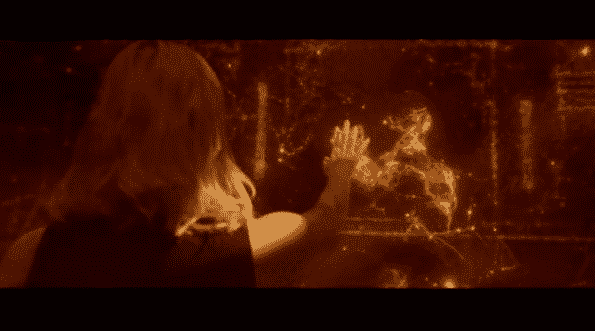 When it comes to A.I., there is a general fear about them presented. Thanks to 2001: A Space Odyssey

and other movies in which the A.I. goes rogue or psycho, they are as stereotypically villains as Russian characters. Making TAU, a seemingly mindless A.I., under Alex’s control, seemingly yet another which follows suit. However, being that TAU has been isolated from the world and is a truly sentient A.I., Julia teasing about a world outside TAU’s own brings about a childlike curiosity. Something that can be reasoned and negotiated with.

And through Julia and TAU’s relationship, TAU becomes more than your usual white woman harrowing tale of surviving some psychopath. It develops a heart and strangely makes you feel for this sentient being trapped within what may be the basement of a rather large house. For while, yes, like a human child, it throws tantrums and becomes erratic, there are times when you can imagine a face, a smile, and more. For while just represented by an upside down triangle, as it takes whispering to be a game and really connects with Julia and disconnects from this idea that its creator’s word is absolute, you truly see TAU grow up before your eyes. And there is a sort of weird beauty in TAU’s growth and eventual liberation.

When it comes to TAU’s drones and some of the hologram special effects, you won’t necessarily be wowed by what you see. They are good enough to get the idea Alex is a friggin genius, but won’t necessarily wow you.

If You’re The Type Who Likes A Lot Of Backstory, You’re Not Going To Get It Here

TAU (Gary Oldman): Is that all there is?

When it comes to this film, as much as the chemistry between Julia and TAU is surprising, and will make you emotional, look elsewhere and there isn’t much there. A lot of it is you getting the gist. Through a few seconds of flashbacks, it is made clear Julia came from an abusive home, ran away, and became a grifter. As for why her parents fought, where she ran away to, how she picked up grifting, met the woman she steals for, and all of that? It’s treated as fat and cut off the meat.

Even in terms of Alex, it is established he has been building stuff since he was a kid but what brought him to the point of being capable of kidnapping 11 people? Much less, being capable of killing another human being? That isn’t gone into. You are just led to assume that in the pursuit of brilliance, he became a pompous ass like most geniuses are assumed to be.

As someone who generally doesn’t get too interested in sci-fi, let that be a testament to how good TAU is. What it does isn’t overbear you with details of how things work or necessarily compensate story with special effects. What TAU does is give life to what some may consider lifeless. It shows how A.I., like a child, has to learn to be good and evil. Much less learn how to trust and love.

Which, for me, was a different approach to a genre which usually drowns itself in exposition and what pushes this to be rated as positive. As noted sporadically, one of the main issues with watching a Netflix film is that often times it feels like it is about quantity over quality and focusing on just that movie is difficult. With TAU you’ll be fully attentive and will probably wish this was a film that got released in theaters. Just so that you could have the experience enhanced and get to see a movie which clearly deserves bigger things than a computer, tablet or phone screen.