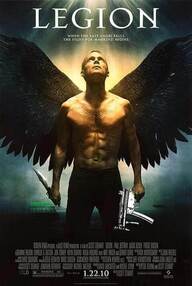 The prequel to Dominion doesn’t do much to flesh out the series, but it makes for a decent movie.

I watched Legion in hopes that some of the missing elements of Dominion, like how all the cities rose, among other topics, would be foretold. But, unfortunately, while we do get a bit of backstory about Michael, Jeep, and Alex’s mom, I must admit I am unsure why this, of all movies, was chosen to become a series. However, the question needs to be asked: is this necessarily a bad movie or just one not strong enough to warrant a series?

In the middle of nowhere is a pregnant mother to be, Charlie (Adrianne Palicki), who works at this middle of nowhere diner owned by Bob (Dennis Quaid). A man whose son, Jeep (Lucas Black), works right next door doing automotive work. Joining them in this oddly placed diner is the fry cook Percy (Charles S. Dutton), who we don’t learn too much about, and no sign of whoever Charlie’s baby father is. Though is Jeep had his way, he would step in and be the man Charlie and her baby needs. Which Charlie does appreciate, but seems to not look as a viable option. For not only does she not want Jeep romantically, but she doesn’t want the baby either. I mean, she smokes while pregnant!

But, one day, perhaps a month or so before she is due to give birth, what seems like another boring day becomes the eve of the apocalypse. It all begins with this seemingly sweet old lady named Gladys (Jeanette Miller), and then the situation escalates to a horde of lower angels outside Bob’s diner. Then two archangels battling it out and wrecking the place. Why you may ask? Well, all over Charlie’s baby.

For those who watch Dominion, the sole thing this movie offers is a bit of background behind Jeep as well as help us get to know Alex’s mother. Outside of that, this movie does make the Michael and Gabriel on Dominion a bit disappointing. If just because Paul Bettany as Michael, and Kevin Durand as Gabriel, are far more appealing in the roles than their successors on Dominion. Bettany doesn’t have Tom Wisdom’s weird brooding persona which makes it seem like he wants to be in an Anne Rice movie, but more so belongs in Twilight. Then, as for Durand as Gabriel, there is this actual menacing persona which isn’t diluted as he speaks in a sentimental nature when it comes to God or Michael. Unlike Carl Beukes on Dominion.

I must note, though, when it comes to scenes without Bettany and Durand, I am unsure how this movie made nearly 70 million dollars. For while Quaid and company certainly aren’t boring, at the same time, the action scenes don’t bring anything which makes the film look any better than the show. In fact, with the movie being focused solely in or around the diner, I would argue the pilot of Dominion brings you a much more interesting universe than the movie.

For while we see a young Jeep, Alex’s mother Charlie, and even get some flashbacks to this small set which represents heaven, nothing seems to really flesh out the story to the point it makes the movie worth seeing, even if you are a fan of the show. I say this because the story itself is rather shallow and keeps the audience on a need to know basis. Then when it comes to the angels taking over humans, while I did enjoy Miller’s scenes, and this evil child which came after her, at the same time it felt more campy than scary. Which may have been the point, but at the same time it just seems like the movie is stuck between wanting to be taken seriously and having an almost Zombieland tone without any outright jokes.

I’m glad I didn’t pay for this film because it really does feel underdone for an action movie. For with a shoddy story, rather tame action, and really most of the characters not being all that interesting, I must admit I am tempted to say to skip this. Though if you are a fan of the show which was inspired by this, I think this movie does have some value. Even if it seems like a two-hour promo. However, if you have no interest in Dominion I don’t think this movie at all will convince you to give the show a chance. And, to be quite honest, this film isn’t even good enough to really help me understand why it was turned into a TV series.