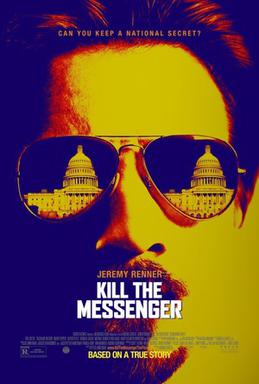 The rise and fall of Gary Webb, all thanks to one exposé.

With prominent names like Jeremy Renner, Rosemarie DeWitt, Oliver Platt, Ray Liotta, Michael Sheen and Michael K. Williams, needless to say, the film is packed with stars. All of which, may I add, do a decent job in justifying their paychecks. However, is the film worth seeing in theaters or are you better off waiting for it to come on VoD/ DVD?

After a writing about how the DEA would seize property and not return it, even if the accused was acquitted, Gary Webb (Jeremy Renner) decides to dig deeper. Thus leading him down a rabbit hole, as Fred Weil (Michael Sheen) calls it, in which he ends up meeting “Freeway” Rick Ross (Michael K. Williams); Norwin Meneses (Andy Garcia), while Meneses was in prison in Nicaragua; and coming up with a piece, Dark Alliance, which connects the CIA with the drug trade all in an effort to support the Nicaraguan Revolution.

Which, as you can imagine, is a huge exposé. One which skyrockets Webb’s career, but leads to some jealousy since Webb works at a no name paper. Thus leading to The Washington Post, and LA Times, perhaps due to CIA influence, discrediting Webb and quickly sending his career in a downward spiral. And with all the bad press and infamy, while his wife Susan (Rosemarie DeWitt) sticks by his side, the same can’t be said for his editor Anna (Mary Elizabeth Winstead) and her boss Jerry (Oliver Platt). They decide to write a retraction on Webb’s behalf and leave us wondering if Webb may ever bounce back, or will he wallow in defeat?

Unless competition ends up being stiff, I can see Jeremy Renner maybe getting major award nominations for this role. As for winning, I doubt it, but he should definitely be in the running for even though there isn’t much action, and Renner never gets overly dramatic, he somehow finds a way to command the screen. Though what really helps him is that everyone from the big name co-stars like K. Williams, down to just a judge who only has one scene, everyone puts on a quality performance.

Now, as for the story, being that it is based on real events and people certainly helps matters. For while I’m unsure how much fiction has been added to this historical account of things, it is hard to deny when Webb is doing investigative journalism, going back and forth with his editor, or us seeing him as a family man, it does help build this idea that it isn’t just another character Renner is playing, but an actual person. One who, as accomplished as he is shown and seen professionally, does have some issues in his personal life which may have been worked out, but still loom over him.

Perhaps my main issue with Kill The Messenger is that the trailer makes it seem a bit more exciting than the actual product. For while the trailer leads you to believe there will be violence, Webb will be stalked and his piece will put his family in danger, pretty much it is all talk and not a lot of action. But, at the same time, isn’t a trailer’s main purpose to get you interested in seeing a film?

But, speaking specifically on the movie, I must say the ending felt like it certainly should have been better. For rather than explore Webb’s life after being discredited by most major media outlets, instead they cut us off before he hits anything remotely near rock bottom. Which sucks because the film ends with a black screen and a montage about what happened after where the film leaves off. Which, to me, should have been performed in the film. Especially since Webb’s speech, which ends the film, was just so anti-climactic. For not only was Renner not giving a passionate speech, but it doesn’t even seem like the type of speech made to put an exclamation point on all that has happened. Which, if this film does get nominated for anything, would be the reason Renner wouldn’t win.

What keeps this from being Worth Seeing is because once the downfall of Webb begins, so does the interest which made Renner seem like he surely was bound for a major nomination. And with the production using a text montage, rather than having Renner explore Webb’s life post the aforementioned speech, they omit a possible reprise which could have livened things up. Hence the TV Viewing label for while the first half is good, the 2nd half leads you to want to check your phone for how much time is left.