Jumanji: Welcome To The Jungle doesn’t really justify its creation, but attempts to make up for that with its comedic performances.

In 2016, it has been nearly 20 years since the last game of Jumanji. A game which evolved from a board game to a something which could be played in what looks like a SEGA Master System. But, unlike the many others who have played before him, Alex played the game alone. Thus making it so, while trapped in Jumanji, he had to face every challenge alone and nearly lost his life to the game.

Luckily for him, in 2016, the Jumanji game, with the console, somehow ends up in the hands of a poor man’s version of The Breakfast Club [External]. We have Spencer, the nerd; Bethany, the hot chick; Martha, the condescending brainiac who is condescending; and Anthony, a jock. They all get detention and end up in the basement where Jumanji has laid in wait for who knows how long. How’d it get there from Alex’s house? Don’t ask that question. All that matters is in the world of Playstations, Xboxes, and fancy Nintendo consoles, these kids picked up something which looked older than them.

Thus sucking them into the game and placing them within characters they adjust to and end up learning many a lesson from. Some of which are comical, like Bethany learning how a penis works, to Spencer and Martha gaining confidence in themselves despite becoming total opposite of who they are in real life. Giving us, ultimately, a decent little action adventure, with a whole lot of comedy, with a very eye-roll inducing message. 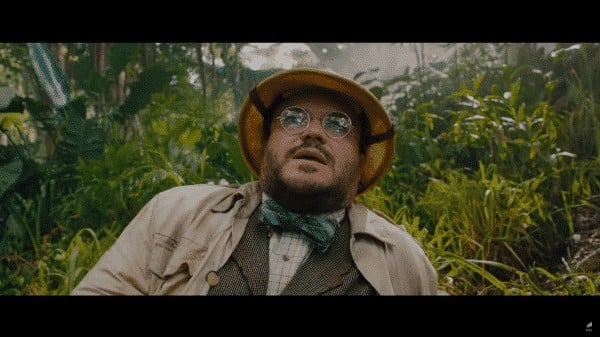 Jack Black playing out a teenaged girl is the funniest thing about the movie. Kevin Hart joins in with some CinemaSins [External] like commentary, and Dwayne Johnson, especially with Hart, gets a few laughs. But, to my surprise, Black completely outdoes Hart and will be the one you remember thanks to a lot of conflicting moments. I mean, come on, Jack Black is a middle-aged man pretending to be some stereotypical, “Doin’ it for the ‘gram” kind of teenaged girl. One which has to adjust to having a penis; that tries to, in a male body, show how girl’s flirt; and while a lot of times it seems more like an eye-roll-worthy parody than something funny, you can’t help but laugh at times.

Then, bringing back Hart’s CinemaSins like commentary, it really gives you a sense of what an actual Black guy would say if put into the world of Jumanji. Things like questioning why an NPC wouldn’t just drive them all the way to a destination vs. have them walk there and face challenges. Also, like seen in Central Intelligence, Dwayne Johnson and Hart just work insanely well together.

For Johnson as some scrawny white kid in this big Black dude’s body doesn’t bring the laughs. More so it is Hart, this shrunk Black dude, facing off with someone who sort of looks like his former body. And with Kevin showing an evolved form of his “Big Little Man” persona, he gets the laughs. Whether you talk about the story, the villain, or even us learning that Jumanji can now transform to adapt to the times, you aren’t given one good reason the 1995 movie needed this sequel. It honestly just seems like another Hollywood movie made simply because the name recognition seemed like it would make it a hit. Especially if not placed in the superhero-heavy summer season and instead tacked to the end of the year. After all, even with cursing and innuendo, it’s family friendly enough.

So, with money in mind, why care about how none of the teen actors pushing the audiences to give a damn about their stories? All of which seemed to stem from one thing or another which happened in the 7th grade? Heck, considering the name of Jumanji is so big, alongside Dwayne Johnson, Kevin Hart, Jack Black, and I assume Karen Gillan’s name has star power (no shade), why even worry about making a compelling villain? Yeah, you got someone like Bobby Cannavale who can act, but why utilize that talent? Let’s just have him look menacing and barely build upon his backstory. We like him, let’s just give him a paid vacation out in Hawaii – surely that must have been the thought behind the character.

But you know what really kind of gets to me? Being someone who saw the 1995 version, multiple times, it made this version seem corny. For the way Alan made it seem, Jumanji was not someplace filled with wannabe Mad Max [External] bikers. It was a jungle in which, despite Jumanji being a kids game, by no means does it seem any parent should let their kids even know the game exists. Yet, instead, we get this ridiculous quest storyline. One in which a curse, that we never learn much about, has to be broken for the heroes to return home.

Heroes who honest, with their watered-down Breakfast Club [External] vibe, you don’t really want to become the focus again. Especially since, for the 10 to maybe 20 minutes you suffer with them in the beginning, you feel like that was enough. Why have me trade in some of the funniest and charismatic actors today with these kids who seem like they belong on some of the worse shows FreeForm could have to offer? Jumanji: Welcome To The Jungle is a money grab – plain and simple. Though it works well as a comedy, it’s connection to the 1995 classic slowly but surely takes away from any and all praise you could give this film. For if it isn’t the ridiculous story, be it that of the teens or the quest they are given within the game of Jumanji, there is the forgettable villain. Alongside that, you get this fantasy world of Jumanji which seems stripped of all the alluded darkness talked about in the 1995 movie as well as the things the game put players through in the original as well.

Hence the mixed label. Since while the film is unquestionably funny, it completely wastes the potential of how modern technology could have tapped into what was alluded to in the original and seems to just want to siphon off the name. Making this so-called sequel barely worth your time, outside of a handful of jokes which won’t even stand the tests of time.