How To Be Single – Overview/ Review (with Spoilers) 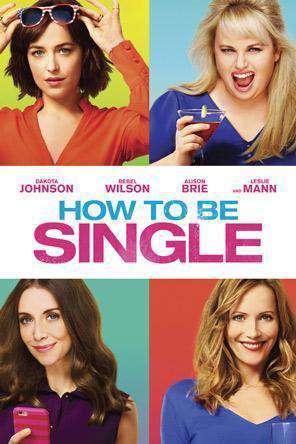 I know what you maybe thinking, but this movie isn’t bad. In fact, while the jokes may not be strong, and it isn’t the most insightful of movies, it is actually quite enjoyable. Hell, one character may even make you cry.

The focus of the movie is split between Alice (Dakota Johnson) who begins as someone who has not only never been on their own, but likely is a serial monogamous person; Meg (Leslie Mann), who is Alice’s older sister, who has been single most of her life because she has been married to her job; and then Lucy (Alison Brie), who just wants it all from a husband to a family, and preferably within 18 months.

Together, alongside Robin (Rebel Wilson) who acts as Alice’s introduction to single life, they try to not only deal with being single, but dating, hook up culture, and also a bit of regret. For with Alice, she ends what was a healthy, but slightly dependent on her part, relationship to find herself and learn who she is. With Meg, she is trying to maintain this sense of independence, yet at the same time there is this growing desire for a child, perhaps a family, and yet even when Ken (Jake Lacy) steps into her life, you can see this fear, or rather insecurity, which constantly questions why perhaps anyone would want her? Then, with Lucy, so comes the question of: Where to find the perfect guy and how to keep him? Which isn’t to imply she seems to have trouble keeping relationships, but more so she is an old fashioned girl trying to adapt to an age where getting married and having kids young isn’t a top priority, especially when you take into account her desires for a man.

Reminding me, while there is a heavy focus on the trials, tribulations, and difficulties of women being single, there is an ever so slight focus on a single man. Said man is David (Damon Wayans Jr.). Someone who sort of comes out of nowhere, half way through the movie, as a possible love interest for Alice, but quickly becomes so much more. Reason being, he isn’t single by choice nor by a breakup. He is single due to his wife’s death and with him having a child, so comes a fresh perspective in comparison to the drama of everyone else.

David: Hands down, perhaps the best part of this movie to me was David. If only because, outside of perhaps Kevin Hill, I don’t know of many depictions of single fatherhood which isn’t portrayed as a comedy, and with Wayans Jr., being black, there is another side to the situation to explore. For, in most forms of media, you don’t see or hear a lot about Black single fathers. Then adding on that he has a daughter, young enough to talk but not remember her mother, there honestly seems to be the type of movie I would love to see made, but likely won’t anytime soon.

Different Views of Being Single: With Alice being into serial monogamy, due to her dependency on her male partner; Meg being hurt once, and then deciding that her relationship will be with her career; Robin being the type who rather fulfil her carnal needs, and only settle down with a guy who she isn’t settling for; Lucy being the type who was thinking, and looking, with her brains and eyes than her heart; and then David’s situation where he is struggling to move on because he didn’t lose his wife to divorce but death, I think the film addresses many different takes on why a person is single, and the struggles which can come with it. Whether the struggles are from internal or external forces.

Alice is likable: While I don’t understand why the girl is barefoot so much, like during parties and walking around in socks on a NY street, Johnson has the perfect mix of looking innocent or naïve, tired due to whatever she is going through, yet intriguing. Making it so, through her journey of self-discovery, you authentically care about her decisions. Whether it be who she should date (I was hoping David could have been endgame), to hoping she gets to do all the things she found herself incapable of doing with her ex. Johnson just really makes Alice into that friend you’ve known forever and just want the best for.

Handles Multiple Stories Which Tie Together Well: Generally when it comes to films with multiple character focuses, there are always a few which seem like they should have been left on the cutting room floor, one or two which should have been the sole focus, and in general it seems like there were just parts written for actors to get the film financed. With this film, however, it seems that mostly everyone was balanced. Granted, David’s story was the only one with emotional impact, and got a few tears out of me but, in general, everyone was about average.

Women Seem Sort of Fleshed Out: While the big focus is on romance when it comes to the women of the film, we are allowed to see them all work and show that their lives don’t strictly revolve around romance. Alice is a paralegal, as perhaps is Robin; Meg is an OBGYN; and Lucy is seemingly an author children’s books. Which I find important because, more often than not, you are left sometimes wondering what does the female character do when they aren’t on a date or in bed with someone, and thankfully this film addresses that.

She Keeps Pushing You Away Yet Still You Are Here: When it comes to Meg’s storyline with her interest Ken, I just couldn’t get into it at all. From start to damn near finish, she is constantly questioning why is he interested in her, and she continually dismissing his feelings on things, yet like a puppy dog, or stalker, he finds her and tries to win her back. Which doesn’t seem romantic for with him talking about how he is a receptionist and had always wanted to be a stay at home dad, when Meg says she is pregnant, it makes it seem like he is trying to wiggle his way into not have to keep working in the occupations he does.

Rebel Wilson: I probably saw this movie because of Rebel Wilson yet, as I watched it, I feel like I’m slowly coming to realize that the reason I enjoy Rebel Wilson is because she is like a generic brand Melissa McCarthy. Wilson is sort of like the methadone you take until McCarthy releases her movie which gives you that full and strong effect you are looking for. Since, in some ways, as you watch Wilson it is not hard to imagine McCarthy in the same role. It is just, McCarthy is undeniably funnier and isn’t so heavily reliant on her size, or being awkward when it comes to jokes.

There is no reason to rush to see this for it doesn’t have anything new to offer. All of the character archetypes, except David, you have probably seen before, in more focused roles, and better written and acted. Yet this film is still a decent watch for it can be funny at times and Johnson makes Alice likable. Add in Wayans Jr. as David, who helps bring a slightly unique spin to the concept of being single, in terms of portrayals in media, and hopefully you can see why this is being labeled TV Viewing.